The Strange Incident at Quail Center 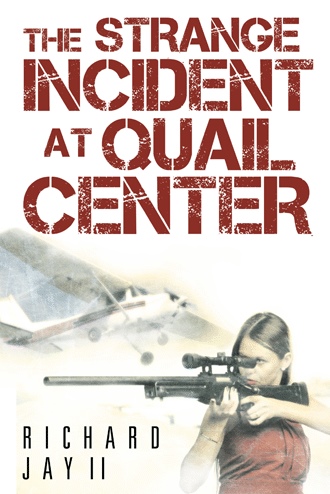 The next morning the sky was cloudless bright. The blue sky was the color of a rare diamond Kit once admired in a National Geographic Magazine. The wind was out of the south at 5 to 8 knots. Kit opened the hangar at 7:15 and then went back to see the wreck with the cost of repair in mind. He spent ten minutes making notes and went back to his desk. After Beau finished his bowl of dog food, Kit sent him out to clear the runway of geese. Evidently, the geese had moved elsewhere. Beau was back quickly.

Kit worked at his desk, getting caught up on FAA correspondence. There were two listing a certified series of aircraft that required repair within a time limit. The directives were addressed to larger aircraft. One of those listed was a corporate jet. Currently Kit’s small fleet of Cessna trainers are in legal condition for training use.

Kit sent off a price sheet for requests of the cost of primary flight training.

Kit heard a car door slam. He looked at the clock. Lisa arrived for her lesson.

“Good morning Kit.” She was grinning as she walked in. “The weather is perfect for flying.” She was dressed in her usual flying attire…T shirt, jacket and jeans.

Kit thought she looked different. It was her hair. She’d pinned it up in an upsweep. Her sunglasses were poked into her hair above her forehead. “Good morning Lisa, where are the donuts?”

Lisa feigned irritation. “I didn’t think that I was setting a precedent last time.”

“Just joking, Lisa. Donuts aren’t good for the figure. Let’s get your plane out so you can do the preflight.”

“What am I going to learn today?”

“First a little review and then we’ll see what you remember about emergency procedures.” They moved the Cessna to the ramp and Lisa did the pre-flight inspection while Kit watched.

“Did I forget anything Teach?”

“Oh! Now you’re getting cocky. You haven’t earned the right yet.” Kit was serious. His method was to keep students safety minded with no room for levity. Flying was often a life or death situation.

“I’m sorry. It was just a juvenile attempt at humor.” She clasped her hands in supplication.

“OK, I accept. Climb aboard and do the panel check.” Kit boarded also.

Lisa followed all the correct procedures before taking off.

“Lisa, I hate to reprimand, but flying is a serious business. People that don’t think that way, end up in the ground. I have never lost a student or former student because I drill them with safety procedures. That’s my lecture for today, and please call me Kit.”

When they reached 3500ft., Kit pulled the throttle to idle. “Simulate a Mayday radio call after the craft is in a textbook glide attitude. Where will you land?”

Lisa had the plane in an efficient decent rate. She started a shallow turn. “I saw a County road back a bit with no traffic and the telephone poles are set back from the road. The wind direction is not a problem.”

Kit didn’t say a word. He just watched her face and how gently she gripped the yoke and headed for her landing choice. . .At 500ft. AGL (above ground level) Kit put on full power. “OK, climb back to 3500ft. and head 270deg,” he said.

At altitude he said, “Do two 360 turns, maintaining altitude.” In a few minutes Kit pulled the power to idle again. “Where will you land?”

“There is a big plowed field ahead but there is a grassy spot off to the side. I’ll go for the grass but I have to clear a ditch. . .and I have enough altitude to make it.”

“Good choice. Plowed fields are bad news. Nosed over plane for sure and probable injury to the pilot.”

“No, but I’ll home in on the Joliet VOR. From there, I know the heading to Quail Center.”

Kit said nothing. She saw that he had his eyes closed. She had no idea what he was thinking or planning but she was sure a surprise was in store. She flew the plane and prepared for a normal decent. “No, no,” Kit said. He shut the engine off completely.

“Now get us down in one piece.”

“Geeze, a little warning would be appreciated.”

Kit leaned back and closed the eye that Lisa could see and didn’t speak again.

Lisa noted the windsock and made her plan. She decided to stay 200 or 250ft. higher than pattern altitude, when she started the downwind leg. She made a relatively flat turn to base and the same to final. She was a little high so she did S turns to lose altitude. She landed with 30% flaps and about 200 ft. long.

Kit was elated, “Good girl. You saved us and the plane as well. Start the engine and taxi to the intersection and stop.”

Kit opened the door and got out. Before he closed the door he said, “Take off and do two touch and goes and then land on the third approach. Don’t say a word now. Just do it and make me proud.”

Lisa’s heart raced as she taxied to the threshold for 1-8. Kit heard her breathless voice state her intentions on the hangar loud speaker. Lisa paused, then took off and climbed to pattern altitude.

Her first touchdown was 150ft. long but her second was on the numbers and she gave it full power, climbed and flew straight ahead until she was out of sight.

Kit moaned, ‘What is she doing? Something wrong?’ He paced constantly, unable to stand still.

It was ten anxious minutes before Lisa came back and did a nice landing. She taxied to the hangar pad and shut down. Kit hurried to open the Cessna door, “What was that all about? You had me chewing my nails.”

Lisa was grinning as she climbed out of the plane. ”I felt like I owned the sky, Kit. I didn’t ever want to come down.” She bubbled with animation. “I’m sorry if I upset you.”

“I guess I understand, Lisa. I remember the feeling when I first soloed. Come into the office so I can make the appropriate entries in your logbook” In a few minutes the log entry was completed. ”Your solo is now legally noted. Now take off your T shirt.” “What, What? Are you kidding?” Lisa raised her eyebrows.

“A new pilot must give up his/her shirt after the first solo. I’ll write your name and the date on it and hang it in the rafters for all to see. It’s a long standing tradition, a rite of passage, so to speak. Your first solo is an important step.”

“I wondered what all those rags were, hanging in the rafters. Well if I must. I’m not one to flaunt tradition.” Lisa took her flight bag and walked slowly to the wash room. She was back in five minutes and handed Kit her T shirt. She had wound a scarf around strategically and buttoned her jacket to keep it there. “If you had warned me, I would have brought an extra T.”

“Now really, that would spoil all the fun. This way it is a moment to remember.” Kit used a Magic Marker to write Lisa’s name and the date on the T. He spread it out and tacked it to the office wall. “Doesn’t that look great?”

“It should” Lisa pouted “That was an expensive designer T.”

“For shame. Flying with the eagles is priceless.” Lisa considered for a moment, smiled and spread her arms wide. Kit took the hint and gave her a long hug. She kissed his cheek. “You’ve taught me the things that fortunate humans do.”

Gulf War veteran Raymond (Kit) Carson is a survivor. Now immersed in civilian life as the owner of an airfield on his inherited land, Kit enjoys instructing his student pilots, especially the lovely Lisa Morgan who is learning to fly to surprise her boyfriend. but when a wounded pilot crash lands on his airfield, everything changes for Kit and his once tranquil operation. After the medics discover the pilot has been mortally wounded prior to the crash, it spurs an investigation by the sheriff’s department that calls on Kit for his expert advice. Although Kit attempts to continue with his business as usual and let the investigation take its course, a new student reveals a surprising story that ties the pilots murder to a past crime. Kit now harbors a lethal secret and tries to distract himself by instructing and romancing Lisa—until fate leads the killer straight to his airfield. The Strange Incident at Quail Center is an exciting tale of murder and intrigue in a place where fledglings earn their wings and romance abounds as a serial killer waits to strike again.

Richard Jay II is a retired engineer with varied life experiences beginning in World War II. He is a pilot, an aircraft builder, a golfer and an avid reader. Plots for stories always beg to be written and Richard does so when time allows. He currently resides in Lemont, Illinois.