If Your Telephone Isn’t Working, Please Call the Office 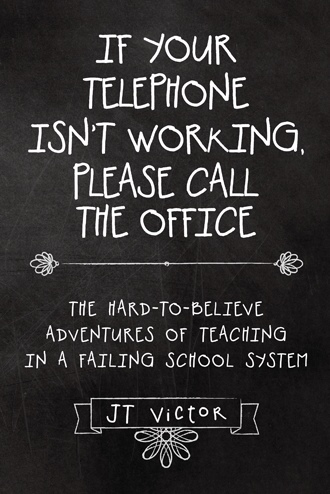 As I drove round the corner there it was, a brown brick, three-story building almost entirely without windows. Its architecture could best be described as prison modern. Surrounded by graying three story tenements it appeared to be the only thing in the area that was new in the last fifty years. It was fronted by a parking lot that looked to hold about a hundred cars. I pulled into it, driving slowly along a line of cars, looking for a space to park. Suddenly a figure flitted out from between two cars and ran up to the side of my car. Hunched over, his face almost pressed against my driver’s side window, he began screaming, “Get this God damned car out of here. Out! Get it out! Goddamn it! You can’t park here, Goddamn it!”

And so I was welcomed to Wolf Middle School by vice principal Ray Williams, the lord and master of the parking lot. What had led up to this moment was every bit as weird.

It’s a cast of characters that sounds too outrageous to be true: school administrators who disrupt the education of students to pursue pet programs, a superintendent who spends taxpayer dollars to upgrade a private bathroom, and principals that cheat on state testing scores.
JT Victor witnessed all that and more when he was a teacher in inner-city public schools, and he shares it all in this candid account that reveals the shortcomings of a system where most of the problems are caused by adults—not students.
However, colleges continue to prep future teachers on engaging students and maintaining order in the classroom. Meanwhile, nothing is being done about the people in charge who don’t have the best interests of students at heart.
Penny-pinching politicians, disinterested parents, and school administrators pretending to be leaders make it nearly impossible for battle-weary teachers to do their jobs. Despite it all, most teachers continue to succeed and students continue to learn.
It all might seem amusing if it didn’t involve our children and tax dollars, which is why you need to know what’s going on so it doesn’t happen at your school.

J T Victor has a master’s degree in education and taught in New England secondary schools for thirty-five years and at the college level for almost a decade. He’s retired and lives in Massachusetts, where he remains a loyal Cubs fan.