Eye of the Storm

by J.R. Johnson & Cover design or artwork by Michael Seidman 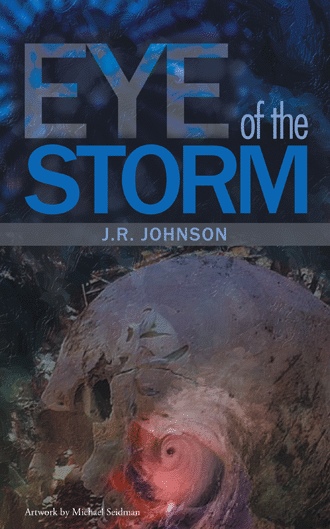 By nine, the sound of wind, rain, and debris rattling the plywood, glass shattering, workers hammering replacement plywood, and children screaming, made conversation nearly impossible. Betty stood in the lobby twirling her glasses chain, watching water stream under the doors. In the past few minutes water had risen to nearly six inches deep on the lobby floor.

“The seals are fucked up,” Jim said. “Moses warned us.”

Tyler splashed to the door. “You’re right. Water’s pouring through.”

Ronnie threw up his hands. “But sandbags are stacked in front of the doors.”

“Water must be pouring over the top of the bags,” Tyler said.

They paused and exchanged glances. If water had breached the sandbags, floodwaters were at least eight feet deep.

“Folks on the ground floor are getting pummeled by all the stuff flying around,” Betty said. “We’ll have to put them on the jogging track and in every available space upstairs.”

The others looked at him curiously. Levity had been cowering in the corner for hours.

Janet Barlow approached breathing fire. She stopped and folded her arms, her face contorted with anger. “Aren’t you people going to do something? The folks out there on the gym floor are holding onto their things to keep them from blowing away.”

“That’s a major hurricane out there, Ms. Barlow. We’re not gonna be able to keep up with the repairs. It’s time to get everybody upstairs.”

“I thought this building was safe.”

“No building is safe in a storm of this magnitude.”

Her expression suddenly showed alarm. “What does that mean?”

Tyler ran his fingers through his hair. “The last dispatch I got from the sheriff’s department wasn’t very encouraging. The storm’s gonna hit as a category four.”

“We can only pray that the building holds together,” Betty said.

Janet looked up. “Sweet merciful Jesus. Save us.”

“There isn’t enough room to put everyone up there,” Janet said.

Using a bullhorn, Tyler and Betty urged everyone on the ground floor to move upstairs. People gathered their things in the wash of the florescent lanterns, but didn’t leave their spots. Then the water started flowing from the lobby across the gym floor, flashlights came on everywhere, and people grabbed what they could and started splashing toward the stairway. But even with the water rising, most remained in place, perhaps waiting for someone to tell them what to do.

Wind rattled the plywood that covered the lobby doors. Jim figured with water pouring over the sandbags, pressure was building on the plywood; it couldn’t hold much longer. Nearby thunderclaps briefly froze the stream of people moving toward the stairs. Betty splashed in the water on the gym floor. “We’ve got to get those folks upstairs quicker.”

Tyler pointed to the southeast corner of the upstairs railing. “There’s a gate up there. I’ll get Moses to unlock it and we can pull out the bleachers so folks can walk up.”

“Thank God so many people came prepared,” Betty said. “Or they’d be wandering toward the stairway in complete darkness.”

After Moses unlocked the gate, volunteers pulled out the section of bleachers. “Betty, most of the folks still aren’t moving,” Jim said.

“We’ll see about that.” She grabbed the bullhorn, and climbed halfway up the bleachers. She pointed to the east wall. “Water’s rising fast outside. Everyone needs to get upstairs before the ground floor floods.”

“It’s already too crowded up there,” someone complained.

“You’ll be dead if you stay where you are,” Betty countered.

“We’re not voting on this.” Her tone registered frustration. “Tyler and Ronnie will escort you.”

Tyler grabbed the bullhorn. “Get your asses upstairs. Now.”

Jim, standing on the ground floor with only a few flashlights nearby, couldn’t see much, but heard loud, multilingual bitching. He could feel the water rising. Others must’ve felt it, too, because the line started moving.

Tyler returned the bullhorn to Betty. She raised it to her mouth and turned to the upper floor. “We need everyone up there to move close together to make room for those coming up. Many of you will have to settle in on the jogging track.”

Within minutes, a slow-moving line stretched from the ground floor to the top of the bleachers. Janet Barlow and her staff went out on the gym floor, prodding folks to move. Ronnie and Tyler served as traffic cops, trying to keep the flow orderly. Betty stood at the top of the bleachers, assuring the line moved as quickly as possible through the small gate.

Kids splashed in the rising water, screaming with fear, perhaps sensing their parents’ panic. “Move it along,” Tyler implored with the bullhorn.

Jim was on the gym floor near the end of the line, nervous that water had risen from ankle-deep to knee-deep in just a few minutes. People began pushing the person ahead and exchanging angry words; the outbursts didn’t get the line moving any faster.

A sheet of plywood cracked, and the glass it covered shattered. Sensing time was running out, Jim got out of line, waving his arms. “Come on, folks, let’s move it along. There’s no time to waste. Your lives are at stake.”

“Who made you the boss?” someone with a Spanish accent snapped.

The sound of shattering glass came from all directions. Flashlights aimed at the doorway and east wall revealed water pouring through gaping holes just as Jim had feared. Parents put kids on their shoulders. People standing in water that was nearly waist-deep, began to panic. Pushes became shoves and punches. Shouts rang out. The straight, orderly line began to break, as people in the back pushed ahead. Tyler’s whistle and shouted commands had no effect.

The deep water made walking more difficult. A few folks stumbled and fell, causing chain-reactions. Jim tumbled forward, going under the rising flood. He fought through a tangle of arms and legs, reaching the surface coughing up sea water. Moving toward the bleachers, he brushed past hands frantically reaching up from the water. Some folks were thrashing about, screaming for help. Stopping meant he would surely die, so he plowed ahead with no thought but his own safety, until he banged his head against the bleachers—then went under again.

Jim Montgomery was the last championship quarterback of Martinville, Texas, and he’s just returned home to mourn the passing of his mother. It is a bittersweet visit to his old stomping grounds, but things take a positive turn when he’s offered a chance to coach the high school’s new quarterback, which is a perfect way to relax before Jim takes the bar.

The outer fringes of a tropical storm hit Martinville, and in the process reveal a buried human skull. Suddenly, what looked to be a relaxing short stay in Jim’s old home town turns into a drama of mystery and scandal. It’s revealed that the skull belongs to a man that went missing ten years ago—following a mysterious boat bombing that left four Vietnamese fishermen dead.

At the time, the missing man’s wife was the prime suspect. Now, nothing is certain. Slowly, like the buried skull, the secrets of Martinville residents are exposed. No one is what they seem in this once quiet town, and the more scandals revealed, the more Jim realizes he and his family are closely connected to what could land someone in prison—or in the ground.

J.R. Johnson graduated from Lamar University in Beaumont, Texas. He owns a manufacturing business that specializes in making rubber products for the oilfield industry. He is married with two daughters and lives in Houston, Texas.