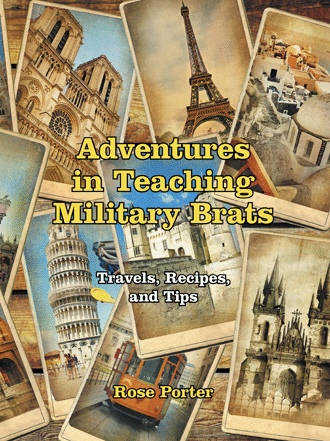 The next morning we went to the base to buy some essentials for the apartment. Our gate pass was not waiting for us! I called the school and my new assistant principal came down to the shopping street to find us. We weren't too hard to find; he just asked the merchants if they'd seen two new looking Americans. He brought us dog and cat food, and an American bar of soap which we needed. We were now ready to head to our new apartment.

We left the four animals and luggage at the smelly hotel and went to pick up our keys. We discovered that all the items we'd requested for our apartment had been installed in the wrong apartment located on the ground floor. We wanted to be higher for security reasons. The lucky renters would end up with our screens and security door for free! By this time, we were ready to run away to the Hilton Hotel in Mersin, but instead, we started moving into the new apartment, complete with no screens to keep the mosquitoes and bugs out, no curtains to allow us privacy, and no security door.

In Turkey the first person to move into a new apartment, buys and installs the tracks for curtains. The first tenant has the marble floors cleaned and polished. The first residents pay to have the dirt hauled upstairs for the eight planters whose depth is at least two feet. The poor men who hauled the heavy dirt were not allowed by the on-site building manager to use the elevator; they had to climb the stairs. We had ceiling fans with lights installed in all the rooms. We found a maid who would help keep the fur from the cats and dogs under control. Our furniture was delivered, and the base delivered the kitchen appliances. We had to buy our washer and dryer. It was 110 F. in the shade, and the local military store was out of air-conditioners! The next delivery date was far into the future. We opted to buy from the Turkish store, so we ordered two White reversible cold and hot air units. Those came from Istanbul in about 5 days. We were in the apartment, along with workmen, finishing screens, hanging curtains, and installing air-conditioners. We were still not cooking at home; it was cheaper and easier to just eat out, so we did! Between the extreme heat and the stress of getting settled, I lost ten pounds that first month with no effort at all!

After the stove was delivered, the maid spent an entire day trying to get it cleaned. Whenever we moved and returned military appliances, they had to be spotless. Evidently, this was not the case in Turkey. She worked and sweated, mumbled under her breath, and finally declared it good enough for me to cook dinner. We plugged it in, turned on a burner, and nothing happened! She looked at me, I looked at her, and we both wanted to cry. I felt frustrated and so sorry for her, but she recovered and went home. The next day Frank got the base to send
someone over to check out the stove's problem. The repairman arrived at the arranged time, puttered around with the stove, and declared the stove broken and unfix-able! They gave us a date for a new stove to be delivered. And so, we continued to eat our meals out. A new stove was delivered, and this one was relatively clean. Our maid cleaned it in about an hour, we plugged it in, turned on a burner, and both of us broke into big smiles! It worked. I could finally cook a meal at home.

The next obstacle was the washer and dryer. We bought them from the military store, had them delivered, and got ready to wash a load of clothes. The washer wouldn't turn on. The store brought us a new one, and it worked. The wet clothes were put into the dryer, the dryer was turned on, it started its cycle, and immediately fast forwarded to the end of the cycle. We didn't know what had happened. It refused to restart. Frank called the store. A repairman came out to fix our brand new dryer. He announced it broken and unfix-able. They delivered a new one. The wet clothes were put into the newest dryer, and it fast forwarded to the end of the cycle too! They came again; this time Frank and I were both out of control. We demanded to know why we kept getting lousy dryers. Were the companies sending defective machines to Turkey? To make a long story shorter, someone finally checked to see the dryers' voltage. We had bought 220 volt appliances, but 110 volt dryers had been delivered, not once but twice. The third but last dryer worked!

Frank was also interviewing at the high school and elementary school for a teaching position. Turkey is not the ideal situation for someone who has nothing to do to fill their spare time. Human Resources decided he was not certified to teach anything! That was a great shock because he was certified for just about everything in Germany. He gave up on Human Resources and went to see the high school principal, carrying his transcripts from the Air Force Academy, showing the credits for an engineering degree, USC transcript, showing a business degree, and Boston University, showing a Master's +30 in counseling! The high school principal hired him almost on the spot to teach math. But the principal did want was call Human Resources to see why they thought he wasn't certified! The answer was not forthcoming, and Frank was hired.

So, now we had a working kitchen, a cool apartment, soil and flowers in the planters, ceiling fans with lights, a shiny marble floor, a working washer and dryer, and a maid to take care of the animals. We were also bug free since the screens had finally been finished on all the windows, upstairs and down, and the balconies. Our home was safe from intruders due to our new wrought-iron security door. We both had teaching positions. We thought we were finally ready to start school. We had been in country three weeks. We decided to have a party and celebrate. One of my friends from Ramstein stated that only the Porters would have a party to celebrate the arrival of a washer and dryer! You had to be there, I guess, to understand our jubilation over something so commonplace and trivial as appliances! It's not something you had to worry about if you were stationed in Europe or the States.

School started. Kids arrived ready to meet their new teachers and to see old friends. Everything was running smoothly. Because of the extremely hot temperatures, school started very early in the morning and dismissed very early in the afternoon. The hottest time of the day was free for kids and teachers. About the third or fourth day of school, the elementary school's air-conditioning quit. It was 110 F. in the shade, no cool air anywhere, windows were open, fans were blowing, and we were totally miserable. It was hard to even breathe, but we had to stay in school. We muddled through, kids and adults, alike. None of us had the energy to do much, so we did what we could. The blessed weekend came and a miracle occurred. The base engineers received the new parts, fixed the air-conditioner, and life resumed on Monday amid smiling parents, children, and the teachers!

Our new crisis arrived early in September. We came home from school one day to find straw from the broom decorating the kitchen sink! We realized that our maid was pouring the dirty floor water down the drain. When the hot temperatures had eased, we were able to open the many windows for fresh air. Fresh air meant lots of dust flying into the apartment. Our maid was cleaning the floors daily to keep the dirt to a minimum.

Rose Porter didn’t hear about the Department of Defense Dependent Schools until she was well on her way to becoming a teacher at the University of South Florida in Tampa.

She immediately knew she wanted to teach at or near a U.S. military installation but was told that she’d need a master’s degree. Plus, only the very best candidates were hired.

Despite those challenges, she eventually found herself packing her bags to Newfoundland, which was considered a remote, unpleasant, hardship assignment. Known as a “one-year area,” it was for new employees who swore they’d go anywhere in the world during the interview process.

That first assignment was tough, but it didn’t stop her from staying on to teach at exotic places throughout the world, learning interesting recipes, seeing sights not on any tourist map, and navigating cultures that most people only read about in books.

Join a lifelong educator as she looks back at the exciting times she’s spent teaching children, other teachers, parents, her own family, and friends in Adventures in Teaching Military Brats.

Rose Porter is a native Floridian who left sunny Miami for snowy Newfoundland, which launched her career teaching Navy, Army, Air Force, and Marine military brats. She currently lives near Ramstein Air Force Base, Germany, with her husband of thirty-three years, two cats, and miniature schnauzer.