A Critical Analysis in Plain Talk 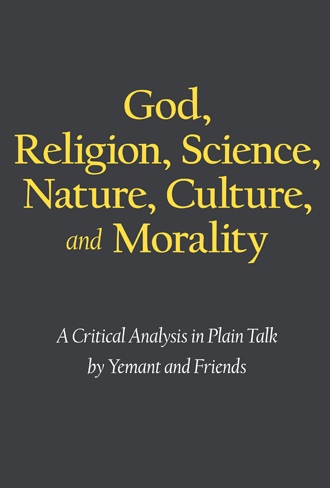 Most of us have never bothered to find out why we believe what we believe. That’s especially true for our thoughts and convictions about religion. Perhaps we were otherwise too engaged. Perhaps we simply adopted what our elders and peers appeared to believe. Whatever the case, isn’t it time for us all to examine matters of religiosity more carefully? At least we—a bunch of retired professors, no longer absorbed by professional duties—thought the time had come to ponder why we had taken so much for granted.

No, we did not see the need to dive yet deeper into ancient scriptures to find the ultimate truth. We focused, instead, on universal convictions. Why, for instance, do humans around the globe believe in creator gods? Why do they envision kind gods who turn nasty on occasion? And why do most people believe that the gods watch and judge every single one of us, discern merit, and then set our fortunes? Can we really converse with the gods and, if need be, bribe them with good deeds and sacrifices? And finally, why are the gods inclined to grant us life after death? If so, why do we have choices between various forms of self-continuance and recurrent physical existence in other organisms? Given that some religions proclaim resurrection with retained identity whereas others propose alternating reincarnation, how can such discrepant projections be equally true?

But we also examine the behavioral implications of adherence to a religion. Could it be that devotion to a creed empowers in rendering hope, confidence, and contentment? And could such reactivity squelch fear, inspire happiness, and ultimately elevate health and longevity? In these terms, how would those fare who fail to enlist the help of supernatural forces? Is it conceivable that humanity would be better off with religiosity than with secularism in which each individual determines what is good or bad for him or her, what for their communities, and what for the world at large?