Zen and the Art of Racing Motorcycles 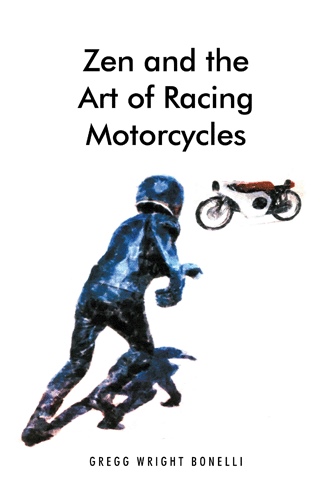 ODE TO A MAN AND A MOTORCYCLE

A man twists a throttle

It does not care

Things are set in motion;

Slides are raised in their carefully crafted

and their brass jets with their tiny measured holes

feel the breeze passing through its caverns

and meter out a measured mist of

fuel from the float bowl below

The key, if there is one, may be on

and if it is, and the battery has its charge,

faster than the speed of light

Signals are sent to an increasing array

of waiting messengers who measure,

and command parts to move

A piston is sent in measured motion

Orbiting along its elliptical path

Of clearances and notions;

It strokes up and down as

puffs of air and fluid are

or persuaded to join

back into the world he knew when he was a young man wondering that the world was;

and what the mass of moving things between his legs; now running faster, now slower,

at his command, just by twisting the throttle, will mean to him, and his world.

A foot finds a gear with a poke or a pull

A hand pulls in a lever then lets it out -

Slowly… moving the bike or making

the world turn beneath him.

It does not matter.

If you want to test yourself to see if you are hard wired to be a motorcycle racer, ask yourself what you dream about after a day on the track. If it’s not the track, then you may be better suited to other things. That is because we have a certain sensitivity to the input of things and if the amplitude of that range is exceeded by our mental limitations then we just can’t manage it. It was just “frightening” or maybe “numbing” or worse yet, it made no impression because it was just too much. I have had fifty years of racing to consider, and depending on where you are in the arc of your career with motorcycles you may have more or less. I have talked to many riders after experiences that did not turn out well and asked them what happened. Their answers fall into two basic categories; the “It all happened so fast…” and “One minute I was doing this, the next minute I was on the ground…” sort of response, and the moment by moment detailed description in abstract terms of the sequence of events that made up the incident.

“I applied the front brake with two fingers and felt a modulation in the lever as the front wheel encountered a depression in the track. The tire began to lose traction and I lightened the braking load which took me off my line so I was now going to miss the apex I had planned for and had to turn in again; this widened my exit point and required an adjustment in my throttle return to full power so my weight shift was changed to accommodate the new setting as I exited the corner.”

“I got no idea what happened. I grabbed me a handful of brake, and BOOM! I’m on the ground slidin’ like a big wet dog on a linoleum floor!”

This is as good a time as any to talk about courage. It’s a brave man that gets back on and races again who was speaking in the second example. That is because he has little or no idea what caused him to go down. He is not analytical, he is reactive. He may think it’s his socks, or what he had at the Waffle House before coming to the track, or because it’s Friday the 13th. He may be right, I don’t know about him other than I know it takes courage to face danger you can’t defend yourself against.

This is not criticism, it is observation. The first of these two examples comes from a cold calculating mind that is up to speed with what is happening and is dealing with the situational data as it arrives and storing it for later analysis if there is a later. It may work out, it may not, but his mind is unemotional about it. It is not screaming “Oh God, Oh God, O God !!!!” to itself as things develop. The man with such a mind is not screaming anything, he is; and here is one of those places where written words show their limitations. I mean to say, he is not screaming anything, he ‘IS’. He is not just in the moment, he is both remote from it and its creator all at once. He is the embodiment of reality as he knows it. This is how blind people go on after they lost their vision. They are still here, the world they move through is still here. The interface has changed, that’s all, and some can deal with it more successfully than other. Ted comes to mind.

It’s the mind / body philosophy problem extended. “I am not just what I think, I am what I feel” a philosopher would say. True enough as far as it goes. Now put that guy in a leather suit and send him down to turn one at Daytona with 40 other guys who also want to get there first and see what he has to say about it. What motorcycle racers say about it is that it is what they think, and what they feel, AND what they do, that makes their reality.

Gregg Bonelli, born with an inquisitive mind and competitive nature, has had the desire to go fast since 1964, when he discovered his true self through racing motorcycles. In this colorful and creative tribute to his love of motorcycling and racing, Bonelli shares insights into life and death from the seat of a racing motorcycle that vividly celebrate the lifestyle he has embraced for fifty years.

Bonelli offers a fascinating glimpse into the thought processes and life of a motorcycle racer, as he made lasting friendships, raced at speeds most would think insane, and met eclectic characters along the way. With his mind constantly on motorcycles and the next race, Bonelli details how the rest of his life seemed only incidental to his obsession with going fast. Whether racing on a 250 Harley Sprint or a TZ750 Yamaha, Bonelli shares anecdotes, poetry, and prose that illuminate the pure joy of what it is like to count down the minutes until he can zip his leathers, hop in his van with his bike in the back, and head out to race again.

Zen and the Art of Racing Motorcycles shares a seasoned motorcycle racer’s perspective on why he loves to ride with the wind with the throttle wide open and nothing but excitement and the possibility of a win before him.

Gregg Wright Bonelli began racing motorcycles in 1964. He graduated from Southern Illinois University with degrees in history and art and from the John Marshall Law School in Chicago. Now retired, Bonelli writes, paints, races, and calls the road his home.