The definitive guide to surviving in a deceitful world 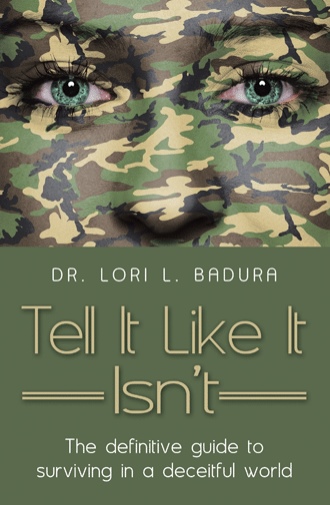 The Many Faces of Deception

My purpose in writing this book is to bring public attention to an epidemic that has been growing in our country for generations, quietly invading our thinking and mindset with insidious ease. It starts in childhood, grows in strength and effectiveness as we mature until it becomes an integral part of our existence even while remaining largely beneath our notice. We seldom see it within ourselves, and yet we revile it in others without ever recognizing the contradiction or the dependency it represents. Success for many is based upon it, while others are condemned and punished for exhibiting it. Its effects are felt through every aspect of our lives – the state of the economy, the actions of the government, expressions of culture, practices of social groups, the nature of religious beliefs, and the structure of our legal system. Not a single day goes by where we are not either exposed to it or found guilty of it ourselves. It is pervasive, communicable, and, while publically denounced, it is functionally embraced at all levels of society. As such, it is the single greatest challenge to our continued health and wellbeing as a culture unless we start to take stock of its rampant influence on our lives. No, I’m not talking about a virus. I’m not referring to terrorism, or crime, or climate change. I’m not pointing to obesity, diabetes, or an obsession with reality TV shows. I’m speaking of the explosion of lying, distortion of truth, and disingenuous behavior displayed daily across all relevant aspects of life that have now become accepted aspects of social interaction.

If you just shrugged and said “Oh, is that all?” you have just made my point. It’s not so much that the failure to tell the truth goes unnoticed – you have only to watch any cable news network to see dozens of examples being discussed during your morning coffee. It’s that lies have largely become an accepted part of how we interact. To be honest (pun intended), most people no longer care - unless of course a lie from someone else puts us personally at a disadvantage, at which point we rave and bleat about it like mad. We have by and large become numb to the flurry of unfounded accusations that fly back and forth in politics, the news, and popular culture, much to our own detriment. The idea for this book was born out of recognition of just such ennui surrounding blatant and very public examples of dishonesty. I had just sat through more than a year of political posturing and chest beating via the Republican primaries, and now we were starting the final push to the 2012 Presidential election with a series of nationally televised debates. I had already heard some of the most outrageous claims and policy positions I’d ever experienced within a single party. Now we were expected to somehow erase all of that from memory and watch the titanic clash of the two major parties with an eye to choosing the individual we thought could best move the country forward. To do that, we had to understand the true nature of the issues, the facts underlying the deficit and the economy, the global challenges we faced in trade and in peace and security, and obstacles facing our ability to work, have access to healthcare, and maintain or purchase a home. In other words, we needed to know the truth about the things that really matter to us all every day of our lives in the real world.

What we got was a shameful series of lies and sleights of hand, accusations, name calling, and distortion of facts. We got personal attacks and vague statements made ever more firmly and definitively, and yet devoid of real information, as the campaign progressed. It was bad enough to be bombarded by unfounded rhetoric during endless hours of television ads, but now we had to watch them play the political game in person instead of actually standing up and saying something true and relevant. I was already at the tipping point when one camp made the now infamous statement “We won’t let our campaign be dictated by fact checkers.” Now to watch these two gentlemen vying for the highest office in the land regress to a barely civil exchange of unfounded and wildly inaccurate jibes and misinformed assessments, well, that was just too much. I literally threw my hands up in the air and said I’d had it with the both of them. Shouting “That’s not true” at the TV wasn’t going to solve anything. If only, I thought, their podiums could be wired up to electrical boxes so they could be zapped into submission every time one of them knowingly uttered a false statement. Or electronic dog collars for that matter. What a boon it would be to the nation if there was some consequence, some behavioral deterrent to the disgraceful, offensive, and downright insulting state of affairs that our political process has become.

And so was born the idea for this book. I realized that politics is only the most public and obvious arena, but that such deceitful behavior has actually become commonplace in our everyday existence. I decided I had something to say about it, and could encourage a way of thinking that might impact on the prevalence of lying and deceit going forward. Not that there aren’t fact checkers out there. Groups like Politifact.com (on whom I will rely heavily in this book) do an admirable job of researching the truth or falsehood of various claims and making the information available to the general public for your own evaluation. What I wanted to talk about wasn’t just specific examples of “pants on fire’ or “four Pinocchio’s” but rather the appalling fact that as a society we accept such behavior way too readily. My years as an academic in the Psychology field made it easy for me to understand why lying exists, but didn’t so easily explain why it is so tolerated. Acts of evasion, dodging the true question, and making outright false statements aren’t secret – we see them on the news every day. But our society has reached the point where our ability to discern fact from fiction has waned at the same time, so that we now attend more to the spin put on a statement than to the substantive content thereof. That is the true tragedy, and the stimulus that drove me to conceptualize the premise of fostering a person process of deductive reasoning as a means to creating a world where people were actually accountable for what they propagate.

The underlying premise of this book is that each and every one of us is capable of developing and honing our ability to distinguish truth from falsehood by using a simple process of deduction and logic. The inherent process of reasoning that is available to all of us provides a framework from which to both judge the veracity of any information to which we are exposed, as well as providing a basis for our reactions to the nature of that information. This rationally-based tool of judgment is a personal cognitive process that you can apply to virtually any situation to increase the chances of making an accurate and truthful assessment, even in reference to your own internal dispositions. Using the fundamentals of scientific empiricism, you can easily learn to apply rigor and skepticism as inherent principles of judgment across the entire range of personal and social situations covered in this book. The goal is to make you a better and more effective consumer of information. The Convoluted Anatomy of Deception

The average person tells at least six lies a day – is it any wonder we struggle to sort fact from fiction in the modern world? Thanks to remarkable increases in the speed and ease of information sharing, the ability to critically judge the integrity of information around us is more necessary now than ever before. Luckily, it is possible for any individual to evaluate information in a much more critical fashion, based largely upon a simple process of deductive reasoning.

This book explores the elements of truth and fiction across the expanse of our daily lives. Through examination of public figures and members of popular culture who have been caught in the act of deception, the reader is encouraged to consider what information can best be used to judge the legitimacy of any event, as well as considering our own culpability in perpetuating a culture of deceit. From the evolution of deception to the private fictions we tell ourselves, this book will guide the reader to a new perspective on the role of lying in modern society.

Like Dan Ariely and Daniel Kahneman have opened our eyes to the fallibility of human judgment, Lori Badura opens our eyes to the psychological and social mechanisms that enable humans to distort the truth both consciously and unconsciously.” Daryl Wansink, PhD (social psychologist)

Tell It Like It Isn’t is a fresh voice in the increasing debate surrounding the growing prevalence, impact, and tolerance of deception. She has brilliantly elevated the discussion to the level of our society, allowing us to consider the deceptive individual within the context of their environment. In my experience, it is rare to find psychological theory presented so clearly and compellingly. John C. Parker, PhD (social psychologist)

Dr. Lori L. Badura is a psychologist and neuroscientist whose career spans three decades across both academic and industry settings. She lives near Boston with her husband, two horses, a lazy cat, and two exceptionally mischievous ferrets.