How I Made Fortunes in Real Estate and How You Can Too!

Fascinating Stories and Secrets for Success from an Insider 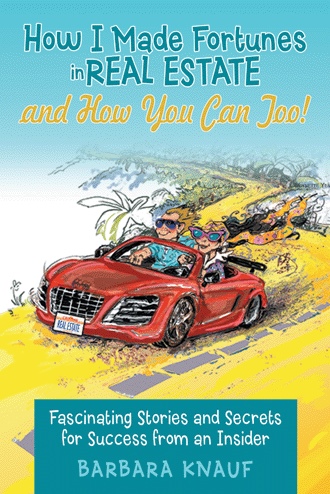 I came to the United States from Germany as a twenty-one-year-old woman with $300, a suitcase, and a job as a Pan American Airlines stewardess. By all standards I was poor, but I had a great job despite the low pay. I flew around the globe for more than six years and had a fabulous time. For many years I was a renter without any significant savings or assets, and I was just making a living in other careers. But when I became a licensed real estate agent, it all changed. I now own houses in Florida, Kansas City, and California. I sold and financed tens of millions of dollars of real estate, and in the process I also made money for my many clients with my advice to them. It is all about making the right choices in real estate. Here in this book is what I have learned and the mistakes I have made. I hope that you will profit from all of it. But first is a glimpse into my life and my story and how I became a real estate investor.

Real estate investing is where you can make the big bucks!

I believe that if you don’t want to be an agent and never work under a broker, and you just want to work as a real estate investor, it is best to gain experience by working as an agent before you become an investor and buy, fix up, and sell (or “flip”) properties. Again, make a plan to follow and learn the ground rules. Decide where in the country you want to work, if you have a choice. Obviously it is better to work in an affluent neighborhood or a wealthy part of the country than in a poor one. Pricing is higher and therefore profits are better, as well. If you work in a part of the country where the minimum price of a house is $500,000, your gain will be higher than if you work in an area where the average house price is $50,000. It is just common sense. For example, if you buy a property at foreclosure for $125,000 and the neighborhood values are around $600,000, and you put another $150,000 into improvements and the house looks great, you stand to make a nice profit of $325,000 when you sell it again. That’s not bad for a few months’ work! People in wealthier neighborhoods can afford to buy more expensive homes and also can pay higher rent, if you want to rent out investment properties. I happened to live and work in a very affluent part of California and later in Palm Beach County, Florida, where real estate values are high and therefore income possibilities are higher, as well.

The best time to buy investment properties is right now

There has never been a better time to buy properties. Money is virtually lying in the streets to be picked up. Why? Well, the banks have foreclosed on thousands and thousands of homes all over the country since 2008. That process is still going on. It has not stopped by any means; people are still struggling to keep their homes, are losing their jobs, and are unable to afford the payments they signed up for. The banks are sitting on millions of foreclosed properties all over the country at this time. They are releasing them slowly, one by one, as REO (bank-owned) foreclosed properties or by auction right now and will be doing so for a long time to come. There are that many homes available, and they eventually need to be sold by the lenders so that the banks can recoup some of their losses.

Barbara Knauf came to the United States with a high school education, a few hundred dollars, and a job as an airline stewardess, but she went on to own real estate in three different states and sell more than 100 million in properties. In this guidebook, you’ll learn from her experience and discover the winning strategies that allowed her to become a successful investor, including: fifteen basic truths to succeed in real estate as an agent advice for creating financial security with real estate investments guide to selecting the right properties and/or foreclosures tips on structuring sales, purchases and contracts important real estate facts for buyers, sellers, agents and investors homeownership versus renting You can play it safe by keeping your money in the bank, but that is not going to get you to your goal of financial independence. Open yourself up to new possibilities, and learn from a pro how you too can make a fortune in real estate just like the author. Whimsical drawings by Lynette Yencho, a Minnesota artist, add to the special appeal of this book, plus Barbara Knauf’s many real life stories. www.realestatefortunesbarbaraknauf.com

Barbara Knauf, a native of Germany, has been investing in real estate for more than twenty years. She’s also a painter and the author of three children’s books and a book of poetry. She lives in Kansas City, Missouri, and has two daughters and four grandchildren.