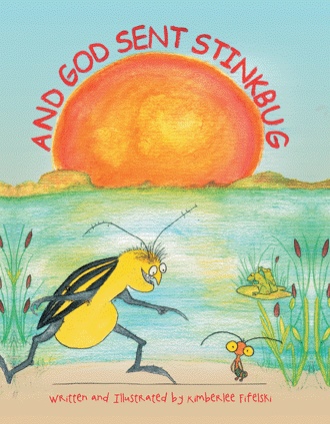 Ants streamed from their lower world through little round holes in the earth. Hot sand burned their feet. “What’s taking him so long?” one of the farmer ants cried.

Finally the master gardener came running through the apple orchard. “What happened to the trees?” he yelled. “There’s nothing left but a few withered twigs.”

“Try not to panic,” the workers said, trotting alongside him. “But the gardens are even worse. Everything’s gone!”

“Get out of my way!” The farmer ant brushed the workers aside and lunged for the only plant left standing. After grabbing the nearest leaf, he tore it from the stem. Everyone leaned in as he studied it in silence. “Too thirsty,” he said in a hoarse whisper. “It’s the drought.” He snapped his hand around the crispy leaf, and the workers winced at the crunching noise. When the crumbled bits sprinkled to the ground, the farmers moaned.

A weed puller threw his basket to the ground. “What are we going to eat?”

A worker dropped his shovel. “We’re in big trouble.”

The master nodded. “Big trouble, all right. The nursery is full of hungry newborns.”

“No, you don’t understand,” the worker cried. “Look over there!” He pointed his trembling antenna. “It’s him, it’s him!”

If finding that the best garden in the world had dried up wasn’t bad enough, things just got worse. A huge monster of an ant, Boss BriAnt, came stomping toward them steaming mad.

“I’m going to flatten someone!” he screamed, and then he huffed and puffed with every pounding step.

Not very far away, little Anthony poked his head out of his little round hole in the sand. The first thing everyone noticed about him was that his eyes were bright green and were way too big for his face. Besides being half the size he should be, he was shaped more like a peanut than an ant. But it wasn’t the way he looked that was the most unusual thing about Anthony. The most unusual thing about this little ant was that he happened to be hiding a very big secret. A giant secret.

A terrible drought has fallen upon the ant village of Forageville. The ants are starving, and the bullies have overthrown the colony. Weak with hunger, a small ant named Anthony prays for God to help his colony. When he finds a treasure map to a giant castle filled with delicious treats, Anthony is sure the map is the answer to his prayers.

But before Anthony can fulfill his wish to save the colony, bullies throw him into the dungeon. That night – sad and fearful- Anthony receives the gift of faith. Armed only with his map and his newfound faith in God, the brave little ant escapes into the darkness.

Once on his quest, he meets a stinkbug with a stomach ache who is willing to help. The forest ahead is haunted and someone is following them. When spiders ready for battle block the path through the Silver Jungle, Anthony’s courage and faith begin to fail.

Anthony is the last hope for his colony’s survival, time is running out and he needs to find that castle before it’s too late.

Kimberlee Fifelski’s early experiences in nature instilled a lifelong passion for outdoor adventure and imagination. She grew up in southwest Michigan and spent many summer days at her family’s cabin in the northern section of the state, swimming, fishing, cooking over open fires, and enjoying the freedom of outdoor life.