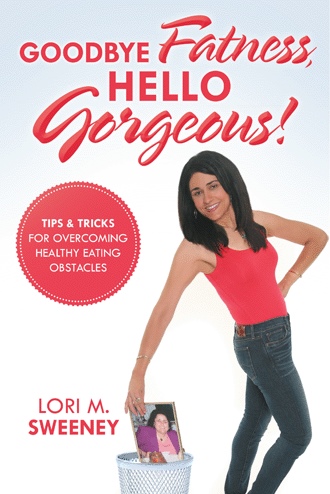 There I was standing on the set of a major television show in clothes I never thought I could wear in my lifetime. I was in a skirt (a little too mini for my taste) and a gorgeous sweater, so proud to be posing. I was in heels, something I would never wear when I was overweight because of fear that those skinny sticks would snap from my 272 pound weight. I actually had to practice walking up and down the halls of the studio in order to get used to the high heels. After much practicing, I was able to master the walk and did well. The audience cheered and I stood there beaming. While up there, front and center, I bubbled over with gratitude to have such an opportunity to be seen by millions. I could set an example for those who have lives similar to mine. So many are overweight, which could lead to cruel words and prejudices. And this overweight body I had also limited friendships and everyday physical activities. But with my hard work and strategies, I became a thin person with a positive spirit. I changed my body and mindset, which led to amazing things I never imagined. The physical transformation led to the mental transformation. Feeling good and wanting to tutor on a wider scale, I share my tips and tricks with you.

This is not where I thought I would end up. In fact, my naysayers would never believe that I shaped up and was on a show in which the host called me “saucy,” a response to my sexy posing. I was the fat slob, the fat loser, the joke. No one wanted to know me at all. There was torture on a daily basis. It existed in my neighborhood, in school, in day camp, in dancing school, and even in my family. Such negative words every single day, along with some physical abuse, led a life of a recluse. I had self-hate and was not outgoing at all. I looked at the ground a lot, being ashamed of myself. I was the loser and was reminded of that so often. After all that, I morphed into a slimmer, confident being who is able to hold her head up high.

While other models chattered on about being nervous to even walk on set, I was ready to face it bravely. The recluse no longer existed and was long gone. Walking on and posing as the cameras filmed us made it an incredible experience. There was no fear and I felt comfortable “onstage” as if it was my home. With such a feeling, I knew I came a long way.

When the show aired, I was called “saucy lady” by friends because of the host’s comment. So I went from shy, to saucy, from obese to thin. My opportunites did not end with that show. Since then, my story has been getting out into the world slowly but steady. In the May 2014 issue of Oxygen Magazine, a feature article titled me “The Biggest Winner.” My local newspaper generously featured me in an almost full page story. The Star Ledger, one of the largest newspapers in New Jersey, put me on the front page, “above the fold” and just under the newspaper’s title. That story was located on the front of the Health Section, two pages long. Shapefit.com, a fitness website, did a story on me which included incredible detail and great positioning of “before” and “after” pictures. Though touting such facts, I am not a braggart. I am humble and proud. Someone like me made it in print and on the internet. I also made it into the hearts of many. Those hearts who have phoned the newspapers, asking when my book is coming out, led me to self-publish. Literary agents and publishers have discriminated, turning me down. I am either not famous enough or I have to be in ten articles instead of four. I decided to bypass the nonsense and will not permit those agents and publishers to hamper my efforts to help others!

I am enjoying the fruits of my labor that I never thought possible. So I share my tips and tricks so you could say Goodbye Fatness, Hello Gorgeous!

As an overweight child, author Lori M. Sweeney was ridiculed and called a loser by children and even certain family members. Her weight increased over time and cruel treatment continued. She inherited new names, including the name, “Fatness.” A major car accident resulted in two knee surgeries and a broken heart. She could no longer keep up with her toddler or do simple things such as walk or climb stairs. She couldn’t find her size in a store and had to special order large, unflattering clothing.

With all the courage she could muster, Sweeney persevered. Since diets of the past didn’t work, she carefully devised a reasonable plan and created lists of situations that caused overeating and paired them with solutions. As a former chemist, Sweeney had the gift of formulations which carried over into the kitchen where she was able to concoct culinary creations low in fat and calories. Her tips and tricks led to a 125-pound weight loss.

In Goodbye Fatness, Hello Gorgeous! she tells her story and inspires others to get healthy and not suffer as she did at 272 pounds. This book is filled with tips, tricks, motivational techniques, and recipes. This collection helps you handle temptations, bad habits, and situations that lead to unhealthy eating.

Lori M. Sweeney is a scientist, professor, and tutor (BA, MBA) who has mastered weight loss by devising her own system to combat everyday obstacles that cause overeating. After losing 125 pounds, she has modeled for The Rachael Ray Show and has been called “The Biggest Winner” by Oxygen Magazine. Her story has appeared in both newspaper and internet articles.