The Last Apple on the Tree 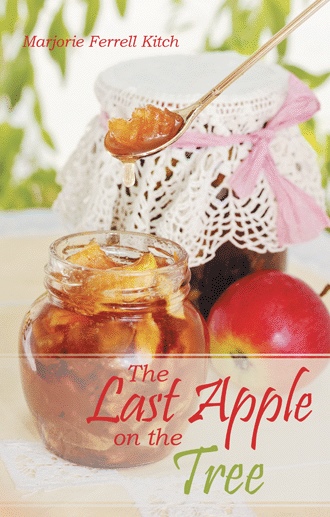 Mel Stoffer: A big man. He looked like one of the giant redwood trees of California. People said his hands were as big as hams. When he walked, he took long strides. He could cover a city block in less time than it took me, with my short legs, to get out of the swing, and down off the front porch. His snowy white moustache topped a gruff mouth, but even in the rare times of anger, the twinkle never left his blue eyes. This was our Grandpa. He was the Sheriff of Reno County, besides having his freight business and a lumber yard. He was also quite a man with the town ladies. After our "real" Grandma died, he married a prim little spinster with a pinched mouth and Puritan ways. She did her best to convert Grandpa. Even went so far as to having a nice black suit made for him. Just for church. "That's fine, Nettie," Grandpa said. "I'll just save that, and wear it at my funeral." She never knew that he kept his promise, because she passed on after being "Mrs. Stoffer #2" for about three years. Grandpa wasn't much on grieving, because about eight months later, he married again. To a short, stout, jolly lady named Jenny Mauck. This caused quite a ripple of gossip around the town. Most of it carried by some of the ladies that had entertained the idea of being "Mrs. Stoffer #3" themselves. We liked our new Grandma “Jenny”. That's what we called her “Jenny”. We would arrive at her back door, unexpected and unannounced. She would greet us with, “Aye, `ere's our Lord and Ladyship, come to have tea, I suspect.” With that, we knew that we were welcome. Sometimes, we would have hard cookies and sour lemonade. But who complains when you are having tea with a duchess? Benny and I thought our two aunts gave us a bad time. It was nothing compared to the way they treated Jenny. Always reminding her that the roof under which she lived had been built for their dear dead mother. The roses in the garden had been planted by their mother. The silverware, the china and on down the line, had belonged to their dear departed mother. Jenny tried to ignore their remarks. Until, it was Thanksgiving. All the relatives were gathered in Grandpa's big house. Jenny had been working hard all week. She had dusted, scrubbed and shined. She had roasted a turkey, baked pies and rolls. The table was spread with a white tablecloth. A big bouquet of chrysanthemums were right in the middle of the table. Napkins, candles, the good china, the whole bit. We hadn't been there very long when Aunt Rennie looking like a bobcat that had its tail caught in a trap, landed on Jenny with all fours. "Jenny, you surely aren't going to use Mama's good china. Why, poor Mama will turn over in her grave if we get one chip in one of her lovely dishes." Grandma #1 was looking down on all of us from a large picture above the mantel. I, for one, thought she was enjoying this festive occasion. Jenny tried to be nice. "We'll just have to be sure that we don't chip them. Won't we?" It went on like that all day. Both aunts, Freida and Rennie, saying that "Having Mama's portrait here in the dinning room was almost like having her here with us." "My," Aunt Frieda pursing her thin lips, remarked, "Mama would surely disapprove of the coffee stain on her good tablecloth." Like most men, Grandpa thought Jenny was paying even less attention to the two sisters than he was. Not so! The day after Thanksgiving, Benny and I went over to Jenny's to see if there was a chance of getting some leftover turkey, or a piece of her pumpkin pie. We heard pounding in the dining room. It was Jenny. She was pounding so hard, she didn't hear us come in, and stand in the doorway. We hadn't been standing there very long when we looked up to see that we had been joined by Grandpa. None of us said a word. We were too busy watching Jenny.

It is 1934, and Mary Elizabeth Barrett is the youngest of four growing up in Benkleman, Kansas. In a town where there are few secrets, it is quite a surprise when her father, George, uses his wife’s jelly-making money to buy a secondhand touring car and announces they are moving to California. Despite his wife Ruth’s protests, the touring car is packed in a week’s time. Whether they like it or not, the family is on their way to a new beginning.

Five days later, after the family stops in Minton, Colorado, for lunch, Mary Elizabeth’s father hops in the old touring car and tells them he will be right back. While the sun lowers in the sky, Ruth finds a note from George in her pocketbook, telling her that although he has decided to head to California alone, he will be back to get them all eventually. With just over one hundred dollars to their name, Ruth and her four children make a decision: they will stay in Minton. As Mary Elizabeth and her family begin anew, they soon realize that happiness comes in the simplest of moments as they learn to look at challenges as stepping stones and face the harsh reality that George may never return.

The Last Apple on the Tree is a story of trials, perseverance, and family togetherness as a mother and her four children find beauty in their own little garden of life.

Marjorie Ferrell Kitch is now retired after working twenty years for the St. Vrain Valley School District. She has always enjoyed spending her free time camping, hiking, and fishing with her husband and two children. Marjorie lives in the San Luis Valley surrounded by the mountains.