Albert, The Story of a Lost Dog 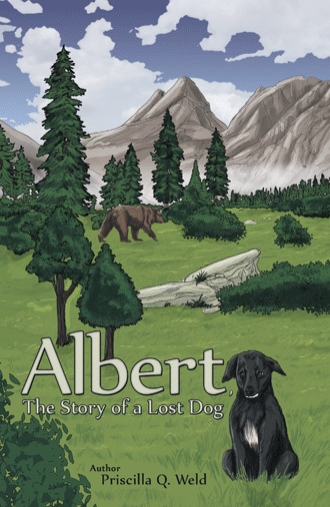 The man and dog stood still and took each other's measure, each too close to death to hide his feelings. Thrusting his cane more firmly onto the cabin porch, the man frowned at the sight before him. A sway and droop in the canine body and the furrowed rib cage mirrored his own slow starvation. He gazed intently at the dog's black, furry skin stretched taut across a network of twig-sharp facial bones. The barking dropped to a growl, and soon there was silence. Looking deeper into the dark brown eyes, the man caught a glimpse of yearning loneliness.

"We already have a dog," he murmured.

In the California Coast Range, an unskilled traveler may quickly find himself in trouble. Streams that rush at flood-speed in springtime and drown those caught in their path often run dry in a summer drought. Animals of all sizes roam in desperate search for food or water, ready to kill. Lightning strikes a tree, toppling it slowly till it picks up speed and crashes to earth.

Beauty and danger go hand in hand. Forests of pine and oak sprout near towering redwoods in mountains whose stony peaks reach high enough to scrape the clouds with pinnacles that defy invasion. The ground is rough underfoot and the way is slowed or blocked by untamed growth of underbrush. Stands of cedar are gripped by tangled huckleberry and sumac.

Soon a wayfarer passes a grove he thought he left behind an hour before, and he must face the growing fear that he is lost. Winter strikes early in the upper ranges.

It was into this wilderness that Albert strayed. He was not a dog who gave up easily. Dumped from a moving truck and lost, he kept on searching for food and help. Mosquitoes and gnats pestered his ears. He shook his head to flap them away and lolled out his tongue to cool off. Hunger jabbed at his stomach, and he dreamed of mounds of kibble. Each night he curled up anywhere, turning his body round and round in the underbrush.

Despite his misery, he became aware of others in this wild country. Several times there was a flash of color and a wing-beat followed by the scream of captured prey. Sharp-shinned hawks glided, pouncing in midair on smaller birds. A gray eagle gained altitude with a rabbit dangling helpless in its clutches. Wherever the forest thinned, winged hunters scanned the area from a height, picking up the slightest motion below and causing smaller animals to race to safety before it was too late.

Green-black beetles crawled over logs and furrowed into mountain wild flowers. Other creatures came out only at night while Albert dozed. A spotted owl hooted like a barking dog. Raccoons with black-ringed eyes scrambled downwards from their daytime refuge in the trees, their claws scratching tree-bark as they descended.

This morning, an animal bumbled through the thicket, holding something in its mouth. Albert had never seen a bear cub before. This one looked confused and pretty small. It would be easy to snatch its food. He started to follow, but suddenly his way was blocked with snuffling and an overpowering stench. Raising his head, he looked into angry yellow-brown eyes glaring over a pointed snout, burst into a volley of barks and rushed at it. Rearing high on its hind legs, the animal swatted with a paw. Sharp claws grazed Albert's back and he felt the power behind the wallop. This was no time for false courage. He backed away, but the body was almost on top of him. The growls turned into a bellow. Albert knew he could not outrun this enemy. He would have to go down fighting.

A sudden grunt sounded nearby. Romping up to its mother, the cub released its hold on a struggling baby rabbit. Despite a badly bitten body, the baby scrambled quickly to freedom. Dismayed at its loss, the cub stood and wailed, while the mother swung away from Albert and carefully sniffed its offspring. Albert saw his chance. Using the moment to confuse them with a leap and midair Frisbee twist he learned so long ago, he turned and rushed from the scene at top speed. With a final warning snarl, his enemy loped back into the woods, cub following close behind.

That night a black and white prowler awakened Albert. He roused himself to investigate, but then his nose began to work. He did not want to get involved with a skunk. He had done that once before at the farm. The animal had squirted him in the face with a liquid that stung his eyes and left a peculiar odor on his fur, no worse to him than many others. He did not understand why he was kicked, scolded and dragged off by the farmer's wife and doused in red juice several times. It was his eyes that hurt.

“Albert, The Story of a Lost Dog” tells of a small dog hurled from a moving truck into California’s mountain wilderness. Suffering from hunger, thirst and loneliness, his skin is inflamed by insects and thorny undergrowth.

When he discovers a dancing fox that hypnotizes wild turkeys, Albert tries a somersault with startling results. Later an angry mother bear wallops him, but Albert is smart as well as brave.

Homeless and wandering, he finally notices a man outside a cabin,alone and leaning on a cane. Running closer, he wags his tail and barks. “We already have a dog,” the man murmurs. But Ellen, his wife, brings out kibble and water for Albert. At nighttime, they take him inside with them.

Carrying suitcases for the drive home to San Francisco, Ellen sees a black flash whirling past her toward the car. It is Albert, dreading another desertion. She lays him on the back seat and his shivering stops. Upon their arrival, two daughters greet them. The family includes a cat and another dog.

A life of drama, humor, sadness and love awaits Albert in San Francisco.

When she was only ten, Priscilla submitted her article to a contest run by St. Nicholas magazine. Contestants were told to write about “The most unusual thing your dog has ever done.” Her English setter had climbed a tree to chase a cat, and the article won a first prize.

As a city staff reporter for the New York Herald Tribune, she interviewed Adolf Hitler’s nephew in the Bronx. The Nazi dictator’s relative had become an American citizen, accepted into the U.S. Army.

Other assignments covered included the arrivals in New York of Eleanor Roosevelt and Golda Meir.

One unusual news subject was a poor horse whose strenuous job was to pull an over-loaded cart in downtown Manhattan. His hind leg got trapped in a manhole, and he had to be lifted out by a specially adapted derrick.

In a few years, Priscilla left Manhattan and moved to the City By The Bay. There she married architect Lee T. Loberg, San Francisco native. They had two daughters, Ingrid and Karen. Priscilla wrote press releases for three creative entities: the California Historical Society, an artistic painter named Jerry Jolley, and a children’s theater.

Rapidly growing daughters were a prime consideration in their parents’ lives. Her husband opened up a small architectural office downtown, and Priscilla became certified as a California court reporter. As a free-lancer for eleven years, she was well remunerated. She particularly enjoyed maritime reporting, when she climbed on board ships at port and covered attorneys’ depositions there. She believes that court reporting is a very good background for creative writing. Accuracy and handling the unexpected are equally important.

When she was widowed, she went back east to assist her Boston family. Subsequently she was married to Lothrop M. Weld, Jr., retired senior VP with a Boston real estate firm. In Duxbury, MA, they lived together with their dogs near the ocean until her husband’s death.

Priscilla returned to California and also to her favorite career, creative writing. Two daughters, two stepsons, A-1 friends, relatives and others add sunshine to her life.