A Story of the Malheur River Country

by Carol A. Crandell 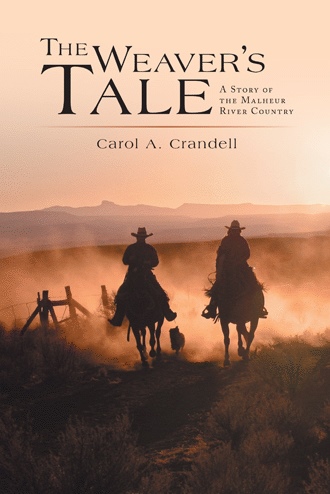 My name is Weaver. What? No, just Weaver. You may not know me by that name; most likely you would recognize me as Fate or Destiny. Why Weaver? Because I take all those threads spun by Arachne and weave them into the tapestry of Life. You humans are so short-lived that I must remake the pattern over and over again. You don’t seem to realize that each time you change your mind or make a choice, you send me back to the loom to plot a new design.

Besides that, I hear that Death told his story of Europe in World War II. Sure, he spared a few, who became heroes, but he left that part of the world torn, bloodied, and in chaos. You say it didn’t stop there? I know. He still hovers over the Middle East. He’s really not a nice guy, and I get tired of seeing all my designs bordered or surrounded by the red of spilled blood. So, I decided to tell a different sort of tale.

It began about a year ago when I noticed the abrupt end of a black wool thread that had held strong and steady for forty-five years. Beside it, lay a sage-green thread,  which continued, with a bobble here and there. Not quite three-quarters along the length of the green, we see three finer strands intertwining with the green and black. These continue. First, comes a dark green that twines over the black and sage. This strand holds steady. A bit further along, a clear blue thread joins the others. It is a happy thread and creates an erratic pattern of whorls and loops. The last, of fine gold, slips into the weave. It highlights the others, waltzes across and around like fine embroidery.

To locate these threads, you must follow me to the far west of the United States, beyond the Rocky Mountains where we find the high desert country of Eastern Oregon. Here, in the southeastern-most county of Malheur, there are both mountains and desert.. The National Forests are of pine, fir, and tamarack, but that is only in the far north of the county. South, you will see the occasional juniper, but mostly sagebrush and bunch grass. Less than one hundred years ago, hardy people trekked into this land to make their homes. One such man created a homestead in the northwest corner of the county, overlooked on the west by Castle Rock, whose basalt cap rises to 6,845 feet. Here, he settled in one of the small valleys containing a nameless creek. Eventually, a stage road was built connecting him to the northern town of Prairie City and Burns to the southwest. He chose well. The valley had two springs of sweet water and natural meadows that provided hay. He built his small home on the west side of the creek where he could see the meadows to the east and watch the sun rise.

Over the years, he added a barn and corrals. The barn is long gone, but the corrals remain. He fell sturdy juniper trees that grew on the nearby hills to make his posts, and ventured to the north into the pine forest for poles. After him, came others who replaced the small cabin with a bigger house, but it, too, began to fade. Finally, in 1996, a young man, our black thread, chose to quit the rodeo circuit and create his dream. He had ridden broncs through college and ten years after, saving all of his winnings. With him, came a young woman, the sage-green thread. She had barrel raced while in college and continued while working as a nurse. These threads came together at various rodeos, and soon, they made their way side by side.

When these two married, they pooled their resources and bought the old homestead. Over the seventeen years of their joint efforts, they built a home of their own design, replaced the old barn with a pole-built, metal-sided horse barn, and just recently added a small bungalow as a bunkhouse.

You’re bored? Hang on! You gotta have the background to make sense of my story. You have to realize that this little ranch lies in the desert, experiences lots of dry, hot weather, I mean really hot. How about 110 degrees in the summer? But that it also has cold and snowy winters, sometimes down to 15 below. The life lived here is not one of ease with paved roads and sidewalks. You live on a gravel road; you are sixty-five miles from a veterinary; and you are ninety miles from the nearest major town for shopping. You wouldn’t like that? Some folks don’t, but then you have others who find beauty, peace and satisfaction here.

These adventurers are not wealthy. They began with the stake earned in rodeos, and about ten years ago inherited a little from an uncle. They have enough to build solidly and buy quality, but it takes a team to make it work. When the black thread ended, I chose to take a look-see. I found that the man had died, tragically and unnecessarily in a two-vehicle accident, leaving a wife and three young children. He had had the foresight to buy a hefty life insurance policy, which would give a cushion for the next year or so, and the vehicle insurance replaced both the lost pickup and the trailer.

A strange dark brown cord, frayed in spots but still strong, just cut into the weave on a collision course with the one’s I’ve been telling you about. I need to watch what happens.

We will follow only the five threads mentioned, although every living thing makes a colorful thread. If I include mention of every thread, you will get confused. Now, settle back and I’ll tell my tale.

Life forever changed for Summer Jackson when her husband, Dakota, died in an accident on an Oregon desert road. Now alone, always tired, and just a little bit mad at God, Summer is doing her best to manage their cattle ranch, raise their three children, and work as a trauma nurse. But when her emergency radio beeps one day to alert her of an accident at a local campground, Summer has no idea that her life is about to change once again.

Tanner Greywolf, once the life of the party with a girl on both arms, is now a self-described worn-down cowhand who, while gathering lost cows for his rancher boss, falls with his horse and breaks his leg. After Summer races to the scene, she tends to Tanner and his horse and transports Tanner to the hospital. When she learns he now has no place to call home, Summer decides to hire him to help out on her ranch. But not all of the family may be as happy as she is to have a new cowboy hanging around.

In this contemporary western romance, a cowboy and a widow rancher brought together against all odds begin an unforgettable journey together to hopefully find the healing they both so desperately need.

Carol A. Crandell is a retired language arts teacher who taught Oregon children how to write. She holds a master’s degree in English from Portland State University and is the author of Merry-Go-Round, a memoir in prose, fiction, and poetry. She lives with Twiggy, her sixteen-pound tabby cat, in Salem, Oregon.