Bartholomew B. Bunny and the Marvelous and Magnificent Dirt-Tunneller 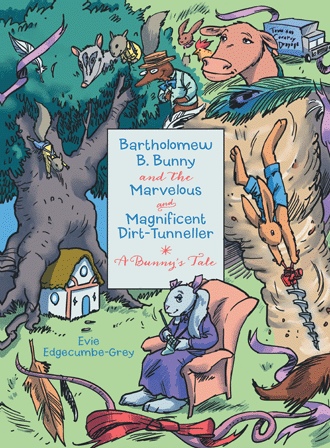 “Oh, oh what was that?” Babette thought, as she was suddenly startled from her needlework. “I thought I heard a shrieking sound over the top of the drone of the DIRT-TUNNELER motor.” She listened intently and sure enough, there it was again. It sounded like Bartholomew.

The DIRT-TUNNELER flung Bartholomew first to one side and then to the other.

The tunnel looked as though it had been planned by a mad man. It zigged, and it zagged! It spiraled up. And, it spiraled down. It went loop-the-loop. It curved right. It curved left.

The DIRT-TUNNELER zipped through the soil at a breakneck speed. It spun like a top. It whirled like a whirling dervish. On and on it went, as if it had a mind of its own; the only thing poor Bartholomew could do was hold on for dear life!

Mr. and Mrs. Bartholomew B. Bunny have been married a year. They’ve finally saved enough to purchase a modest bunny bungalow built for two. They haven’t lived there very long when they find they are expecting a batch of baby bunnies. What will they do? What would you do?

Bartholomew has an idea—he will add an addition to their burrow that will be big enough to accommodate their bouncing litter of baby bunnies. Little does he know what kind of trouble he is in for after he orders a marvelous and magnificent Dirt-Tunneller! The problems begin when Bartholomew reads an advertisement in an old copy of Better Holes and Gardens in kindly old Dr. Goat’s office. From there the complications just continue to grow.

Bartholomew B. Bunny and the Marvelous and Magnificent Dirt-Tunneller is a whimsical, action-packed story about do-it-yourself projects, the importance of reading instruction manuals, and believing in one’s own ability. Captivate your children’s imaginations and maybe inspire them to take on a project or two themselves.

Evie Edgecumbe-Grey is a retired university instructor, credentialed elementary school teacher, mother, and grandmother. She currently lives in Minnesota on a farmstead situated on a knoll overlooking a private lake with her three dogs, three cats, and a horse. She believes life should be filled with joy and whimsy.