The Highest Rung of the Ladder

by Deane May Zager 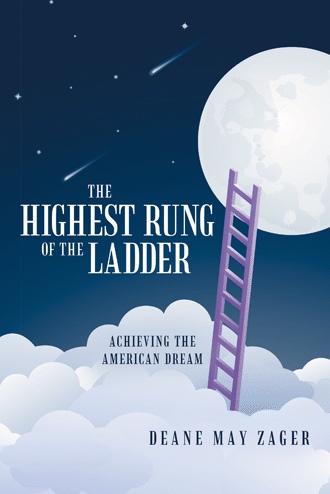 “I'm against a homogenized society, because I want the cream to rise.”    Robert Frost

A small handwritten note at the bottom of the phone caught my eye; “Out of Order” just at the second I inserted my last dime and lifted a dead receiver to my ear.  I slammed the receiver hard, with an expletive that would have sent my Granny scurrying for a trusty switch, when suddenly nickels, dimes, and quarters began pouring out of the coin box onto the floor.  I thought, “I must be on Candid Camera” but looking around, I saw no one.  Then the front of the service station came into view and a sign clearly posted on the front door, “CLOSED.”   It looked as though it had been closed for quite some time and I could see why with little or no traffic on this road.

Many roads in Orange County were lined with palm trees, orange trees and strawberry fields but Jamboree Road, being part of Irvine Ranch, was lined mostly with bean fields.  Known many years for producing oranges, cauliflower and grapes, the ranch now produced mostly barley and beans.  The road ran all the way from Irvine Lake to Pacific Coast Highway.  It was actually built and named for a Boy Scout Jamboree in 1953.7  Since Orange County was deemed a “country cousin” to Los Angeles the Boy Scout Jamboree was a big event and one of the key things that put Orange County on the map.

In 1957 Irvine Ranch granted Ford Motor Company a lease of 200 acres on a hilltop overlooking Newport Beach.  This was beautiful property. Ford Motor Company had the foresight to build in this pristine setting and they were the only company in that area for several years. The road off Jamboree leading to their stately buildings was named what else?  “Ford Road.”

Speeding along in Diana’s yellow convertible it was so clear today we could see Catalina Island.  Down the road a short distance I saw a service station and a phone booth.  Our appointment with Mr. White was at 11 o’clock so I said, “Diana, we have plenty of time, would you stop at that station so I can call home?”   Judy, my six-year old had a cold and I wanted to check with the babysitter to see how she was feeling.   Diana pulled into the gravel parking lot and I hopped out and ran over to the phone booth.  Here I now stood, looking down at all that money spewed out across the phone booth floor.  Quickly I knelt and gathered it up in my skirt and took off running for the car.  Flying across the gravel I called out, “Look Di, Look! We can eat now!”     Before we left the office that morning we had discussed the possibility of having lunch after our meeting.   Between the two of us we didn’t have enough money for one hamburger; but now we did!

That’s the way it was for two young women who, with nothing more than intestinal fortitude and a dream, opened the first Data Processing Service Bureau in Orange County, California in June of 1962.   Three months prior to this sun-shiny day Diana and I were sitting in the coffee shop at Lynwood Bowling Alley and Orange County Key Punch Service became a thought, a determined action and then a few days later a reality.

Deane May Zager and Diana Turner were two young women with a dream when they opened the first data processing service bureau in Orange County, California, in June 1962.

Within twenty-four hours after the idea of a business was conceived, they had a small office. John Dewey said, “The highest mark of intelligence is to recognize and grasp a genuine opportunity.” They did.

Using the slogan “Accuracy Is Our Key Word,” they included their home phone numbers on business cards, pledged not to miss a call, and vowed never to date anyone in authority to award contracts because it wasn’t good business.

As executive women in the data processing field at that time, they were an anomaly, but they earned respect and built a booming business a man’s world—all while enjoying an active family and social life.

Their story is filled with laughs galore at some their unorthodox business adventures. It demonstrates the value of friendship and confirms that with little more than a dream and determination, anyone can blaze a trail in business and reach The Highest Rung of the Ladder.

Deane May Zager was president of Orange County Data Processing Inc. for thirty years and taught school for ten years. She was honored as the Outstanding Business Woman of the Year in 1991 by the American Business Women of America, Orange County California Chapter. She currently resides in Winchester, California.