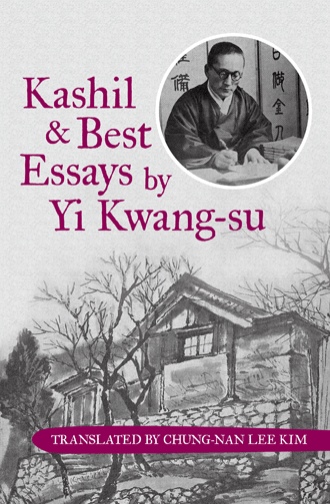 Yi Kwang-su was one of the pioneers of modern Korean literature. Throughout his lifetime, 1892 to 1950, Yi wrote twenty-seven novels, numerous short stories, essays, and poems. Most were written during the Japanese colonization of Korea until 1945. In Kashil and Best Essays by Yi Kwang-su, Chung-Nan Lee Kim, Yi’s daughter, translates a series of short stories written by her father.

Yi Kwang-su contemplates serious topics, such as the purpose of life, destiny, the meaning of death, and reincarnation, and he does so by reflecting on events in his own life and those around him. “Kashil” was based on a short tale described in the “History of Three Kindgdoms.” It is considered Yi’s landmark historical novel that depicts the destiny of an individual in the context of history. “Memories of My Child Pong-A” describes Yi’s devastating sorrow, despair, and self-remorse upon the death of his son Pong-keun whose death strengthened his devotion to Buddhism. “The Narrative of Selling the House” and “The Crow Caws” are important works representing a category of stories based on Yi’s private life.

With a Buddhist influence, the works in Kashil and Best Essays by Yi Kwang-su reflect the enlightenment ideology of social, educational, economic, political, and cultural reform for Korean self-strengthening, national consciousness, and independence.

Chung-Nan Lee Kim was born in Seoul, Korea, and received undergraduate and graduate training in English literature at Bryn Mawr College, University of Chicago, and New York University. She has taught at colleges and a University and later has studied and practiced law. Kim lives near San Francisco, California.