The First Days of August

Ad Hominem: Never Judge a Man by His Cover 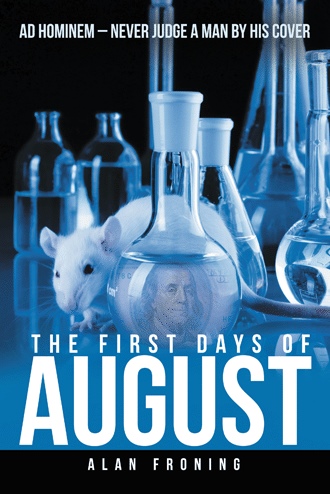 Mrs. Angela Jackson had been healthy for more than forty years till early Friday. Preparing breakfast in the kitchen, she swayed, grabbed for the counter, exclaimed “Oh, God, my head,” and then dropped to the floor in front of Mr. Jackson and their three children.
With sirens blasting the paramedics had arrived in eighteen minutes. At All Saints Memorial nine minutes later, a CT scan of her brain had shown a bleeding aneurysm in her brain, and within another five minutes Mrs. Jackson was in the neurosurgical operating room suite with Dr. Steve August, aided by an anesthesiologist and three nurses, fighting to save her life.
This was a particularly difficult operation. At the moment Steve could not see his fingers, which were reaching into a small crimson pool filling the cranial cavity of his patient.
Steve needed to clamp the artery feeding the aneurysm, but blood was pumping into the space around Mrs. Jackson’s brain faster than the suction tubes were pulling it out. Beneath the surgeon’s mask he felt a bead of sweat collecting on his upper lip. Salty. His mouth was dry.
With his right index finger, invisible in the little red bath, he traced the edge of brain tissue around to the pulsing warmth – the bleeding artery. In his left hand he balanced a clamp, letting its weight move along the edge of the living brain, into the darkening pool, down to the tip of his finger. Now only touch and faith could guide him. He lightly moved his left hand forward, relaxing his grip on the clamp.
He held his breath.
The operating room door squeaked. His eyes, mind, and heart were focused on the patch of blood, yet behind him he sensed the arrival of Marion Phillips, one of neurosurgery’s living legends. His presence was comforting, familiar, and Steve found himself breathing again.
And as though on cue the vessel beneath his finger was no longer pulsing. The clamp had worked.
The voice was soft, yet steel, “August, what’s the situation?”
“Under control, Dr. Phillips. Small aneurysm off the anterior carotid. Bleeder. I think the clamp’s holding.”
Indeed, the bleeding had stopped. He stared at the pool filling the base of Mrs. Jackson’s skull, willing it to go away … and, as if by magic, it dwindled. The suction tubes drew out the blood. Within seconds the surgeons could look inside and see the base of the brain, and there they saw the offending artery, securely clamped.
With the blood flow stopped, the aneurysm was now safe, but parts of brain were being deprived of their blood supply. Within a couple of minutes brain damage would result unless the vessels could be repaired.
“Not bad, Dr. August. Not bad at all. Shall I continue, or would you prefer I first-assist?”
The old man was always good for a laugh. “Thanks, Dr. Phillips, but if it’s all the same to you, I’ll just back you up.”
Phillips chuckled, “Someday, August, you’ll make a damn fine neurosurgeon.”
He held out his hand to the scrub nurse, who with a practiced maneuver slapped a loaded needle-holder into his palm. With relaxed twists of his wrist Phillips sewed a new, artificial graft into the clamped artery and shunted the graft around the aneurysm, joining it to the blood vessel on the other side. He then opened the clamp, and the blood flow resumed its normal course around the aneurysm site.
“Well, Steve, I’d say that looks acceptable. You mind closing up?”
“No sir, be delighted.”
And Steve was delighted. The operation had saved Mrs. Jackson’s life.

Steve August is lucky to get a job at the world-famous Angion Laboratory in Boston, headed by George MacGregor, a prominent scientist turned entrepreneur. The young neurosurgical resident never expected such an honor. He accepts the position and, in an effort to impress, works to the point of exhaustion. Half-asleep at his desk late one night, Steve overhears company secrets he should never have heard. Steve can’t help but investigate, yet the more he digs, the more he becomes entangled in a web of deceit surrounding the laboratory’s prize product, Angiotox, a purported miracle cure for brain cancer. Meanwhile, Steve’s girlfriend Morgan finds herself in a similar maze of corruption at her corporate law firm in New York. To solve the Angiotox mystery, Steve ruins his career and goes into hiding, while Morgan forsakes her legal career to join forces with the NSA, hoping to find Steve and the secrets he unearthed at the Angion labs. This is a fight to the death, with many millions of dollars – and lives – in the balance. Wrestling with their own ideals of trust, integrity, and fidelity, Steve and Morgan may lose each other in their struggle for the greater good.

Alan Froning is a prominent physician and educator who has worked for more than twenty years in the worlds of academic medicine and the biomedical industry. He has closely studied the relationships between medicine, science, research integrity, and commerce. This is his first novel. He currently resides in rural New England.