Beyond the Moral Matrix

A Search for Human Freedom 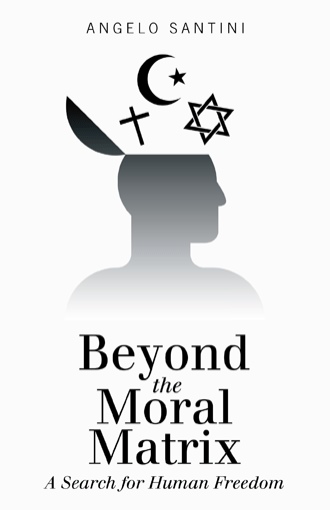 It has become apparent to me (the older I get the more so) that all human knowledge is fictional, that is not absolute therefore insufficient to explain the mystery of our existence. Whether it is science, religion, philosophy it seems that, as they are articulated now, all these disciplines by enlarge fail to satisfy one of our most basic needs as human-beings; that is to feel complete, whole in our identity and in our happiness.

Existence, as it is expressed thorough these collective disciplines and as Shakespeare put it: “is like a tale told by an idiot, full of sounds and fury signifying nothing.”

The purpose of this book is to shed some light upon this tale of the idiot and make it understandable in broad terms, to the general reader. For this purpose I have tried to keep the concepts and the language as casual as possible but some time I have found it necessary to use philosophical terminology for lack of better words. However it does not necessarily mean that my model of the human-being is the same as that which is typical of philosophers or theologians from whom I have borrowed the terminology.

Their function is to enable us to see ourselves act in the world as an entity to whom ones experience and actions belong. However, the world of the mind which is constituted by concepts, the world of the body, which is constituted by sensations arising from the external world in itself (which are captured by and funneled through the organs of sensations to the brain, i.e. though the eyes, the ears, the nose etc.) alone by themselves and in themselves these two worlds have no reality. This is what makes us humans and sets us apart from other animals; they lack the necessary reflective consciousness which would give them a sense of identity. This is our greatness as humans to have an identity but also is our curse because it separates us from nature.

The consistency of memory is what determines my identity. Conscious thought usually has a stream of consciousness that alternate from present to future to past and in alternative orders of these. The consistency of memory is instrumental to have all these thoughts and relations to past experiences feel as though they belong to my mind and therefore me in the totality of my life; past, present and future.

If I relate all those thoughts and memory to an “I”, such I is not transcendental as in the manner of Kant, but it is a subjective I which is the totality of my life as remembered up to this point in time. (Not necessarily all at once; I can be selective without losing the sense that the particular memories belong to me).

Consciousness needs critical analytical thought and a sense of identity or judgment would be an impossibility. Without a reflective consciousness which is essential for an act of judgment, there would not be any analytical thinking. This reflective consciousness is related to but it is not the “I”. This consciousness must project itself onto the future and realize that the present state of affairs could be other than they are. In the process of planning an event, I must project my thoughts toward the future and envision what the final product should look like in the face of past experiences. Then physically realize the intermediate projects; i.e. I must go to bank and get some money, then drive to the grocery store to get some food and then stop to get a birthday cake, cook the meal in a certain manner etc. … the totality of these sub projects will equal to the total project that I envisioned beforehand to make them come true.

This self-identity is self-consciousness and it is that which breaks the interconnection of all beings of nature as it separates us from the unity of nature and the universe as a whole.

This consciousness is a by-product of brain activity; it is neither occult nor transcendental in the manner of theology. The brain represents to itself images in time. Memories are the past for the self although subjective past not objective and the future are images thought of in an imagined future not real. It will become real once I actually will accomplish my project and eventually my real project will become memories stored for future reference.

God is the universe and all that there is including minds are modes of God and these modes of God have different attributes but essentially all is one substance. Being is one and only one. The mind is the idea of the body and the mind of God is the idea of the whole universe (natural laws).  In this sense I agree with Spinoza.  The confusion arises when people start thinking of mind as something immaterial and detached from the body; as in the manner of Descartes.

The activities of the modes of God (beings) in the universe are determined by God as the only real Being who is cause of itself and consequentially the cause of all his infinite modes and attributes. Freedom of choice is an illusion as all is determined by God.

For man therefore self-knowledge will always be subjective and of consequence also the meaning of his life will be subjective for objectivity only belongs to beings that are causes of themselves and of such there is only one God.

We as human being can only have reality and existence in the being of God. Without God there would be no reality for us either. If God should cause himself to no longer exist we would all seize to exist as we are part of him just like the cells in my body are part of me the universe and all the individual things in it are part of God.

Therefore Good and Evil is also an illusion and therefore sin as well.  The concept of sin has been invented by traditional institutionalized religions to control the masses through fear of God and the prospect of hell after death all this to maintain the churches power over their subjects.

All that there is, was and will be is God and all is determined, there is no real freedom, as we can never know the will and ultimate purpose of God it may be that all our history is necessary exactly as it is for things to become what must become.  We are more than likely a step within an infinite number of steps of evolutionary process and the ultimate being may be as far up the ladder of evolution from us as we are in relation to the humble amoeba.

Despite our many abilities, human beings have yet to harness absolute answers to the mysteries of our very existence. Over the centuries, many great thinkers have tried to make sense of it all, through the use of science, philosophy, and religion, but the big answers remain elusive. All human knowledge, at its core, is a fiction.

A personal guide to freedom and spiritual awakening, Beyond the Moral Matrix explores philosophy of the mind, philosophy of science, and the philosophy of morality through an in-depth analysis of the structure of self and self-consciousness.

It exposes the inadequacy of traditional organized religions, including Christianity, Judaism, and Islam. The masses have been subjugated and exploited by religious morality that inflicts the social values of the elite classes upon followers, which has resulted in the present geopolitical and economic conflicts in the world.

Extremism is to be blamed on the use of thought control by the clergy and its emissaries; this type of control is based on a false image of God and His will. We have taken all that we claim is good, put it up on a pedestal, and called it God—the cause of much suffering in our past and present world. Heaven and hell are not real places; they were invented by the clergy to control the masses through fear. We are a universal brotherhood who are part of and belong absolutely to God; past, present, and future, all is God and God is all.

Angelo Santini was born in Italy and immigrated to Canada in 1964. He has worked as an accountant and is now a concierge at a luxury condominium community. He has a BA in philosophy from York University. A third-degree black belt, martial arts are an integral part of his philosophical awakening.