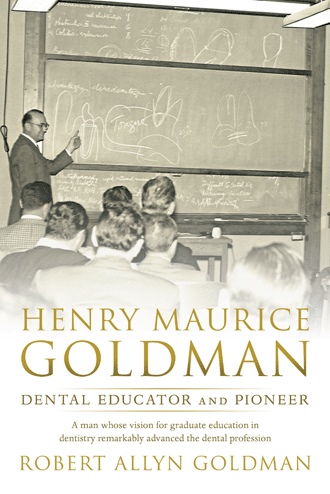 Henry Maurice Goldman grew up in a blue collar section of Boston, but he rose through Ivy League institutions to become one of the world’s greatest dental educators.

In this biography, Robert Allyn Goldman pays tribute to his contributions in this eye-opening biography that will fascinate dentists, educators, history buffs, and anyone with questions about how their individual dental needs might relate to the profession in general.

As Goldman’s career blossomed, he realized how uninformed people were about their own dental health, and when he left The Armed Forces Institute of Pathology in Washington, D.C. after World War II, he devoted himself to periodontics, which was at the grassroots of his training and practice in oral pathology.

Eventually he discovered that to accomplish his goals, he needed to tackle a bigger problem: the lack of training of dentists and poor dental health care delivery. That led him to devote all his energy to starting a school dedicated to dental specialization.

By delving into Goldman’s life story, you’ll get a firsthand look at the problems he solved and gain a deeper appreciation for dentistry and dental health.

Robert Allyn Goldman, a native of Newton, Massachusetts (born in Cambridge, Massachusetts), was educated in Cambridge, Philadelphia, Cleveland, and Boston. He practiced periodontics in the Boston area and in Florida. He also taught Oral Pathology, Oral Medicine, and Periodontics at Boston University and Tufts University. He lives in Columbia, South Carolina.