A Piece of Blue Sky

The Dynamics of Faith 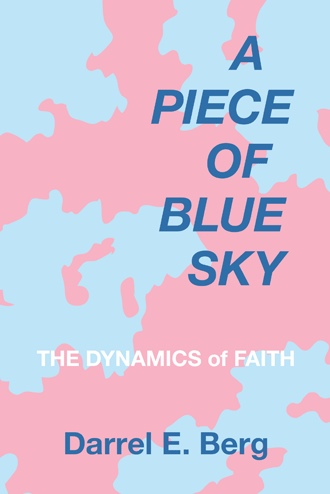 Toward the conclusion of the book which bears his name, Huckleberry Finn allows that if he had known what trouble and bother it was to write a book, he never would have started. But of course, we all know that once he had started, he could not stop. That is the way it is with writing a book. That , we may suppose , is why Thomas Carlyle once complained of his current effort, “This book! It consumes me like a Nessus’ shirt.”
The pages that follow are the result of a series of sermons based on the life of Abraham. I have learned ,however, that there is more to writing a book than dusting off an old sermon series! There is in it, what Carl Sandburg called, “Something crushed in the heartsblood of pain.” It is by no breath or turn of the eye that salvation joins issue with death, and that is the order of the day if a book is to be written.
“Son of man, can these bones live ?” is the question of the prophet, and it could well concern the cemetery in which old sermons are interred. The answer to the question of Ezekiel may only be found if one believes in “the power of the resurrection.”
My own intellectual and spiritual migration has been from asking “What does the Bible SAY ?” to “What does the Bible MEAN ?” Instead of being a pilgrimage from Egypt to the Promise land, mine has been a long, circuitous journey, but along the way thee have been oases when meaning has broken throughout he clouds.

A Piece of Blue Sky: The Dynamics of Faith turns to Abraham, the patriarch of the faith, to find both encouragement and challenge. In a classic series of sermons on this figure, Darrel E. Berg explores the dynamics of faith. Seeking the parallels between Abraham’s path and the course facing an individual seeking to live by faith in today’s world, he offers several key, guiding insights. The life of faith is like a pendulum that swings between doubt and trust. The person who follows God in faith will face times of sacrifice. God desires for individuals, by his grace, to accept their own identities and to embrace their places in God’s plans.
A key message of A Piece of Blue Sky is clear: Christians’ lives are not necessarily free from tension or exempt from strife. Its encouragement is equally unambiguous: despite the swings between enthrallment and discouragement with God’s calling, Christians can remain committed, like Abraham, to remain obedient to God and to follow his guidance for living.
In A Piece of Blue Sky: The Dynamic of Faith, one hears clearly that just as Abraham never found all that he sought on his own journey through life, Christians today can continue to seek the promised land to which God calls them. Even when that journey leads to places where clouds of adversity hang over the life of faith, Abraham’s example reminds them that God always holds out the promise of a piece of blue sky.