From Obscurity into God’s Marvelous Light

Finding the “You” that You Were Predestined to Be 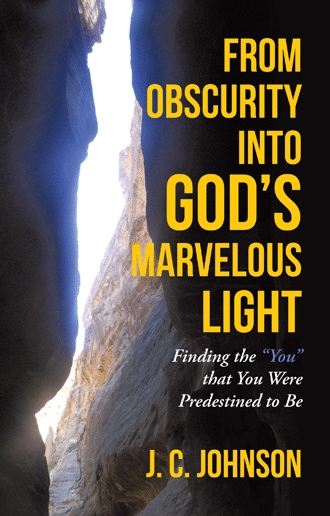 The sun and the moon began to fade, obscured by the brilliance from your arrows and the flashing of your glittering spear (Habakkuk 3:11 (NLT)

Are you living the life you were created to live or do you feel that there is no motivation to being you? Are you fulfilling your purpose or are you still wondering why you were placed on this earth? Is there more to you than what others can see? Is there another ‘you’ on the inside who wants to emerge who is capable of doing more than what you are currently doing?
If your answer to any of these questions is yes; then the person you were pre-destined to be is living in obscurity. The pre-destined ‘you’ is the person who God created you to be. In order to live in your destiny; this ‘you’ who is on the inside of you, must emerge from obscurity and into God’s marvelous light.
For this ‘you’ to emerge, you must travel the journey which God specifically designed for you. This journey transforms you and prepares you to reveal and release what God placed within you; it prepares you to live in your pre-destined role.
Most of us have heard the story of the ugly duckling. The beauty of the swan could not shine forth because its beauty was obscured by the vision it had of itself as well as the opinion of those around it. These persons had deemed it a duckling and had ascribed to it characteristics of a duck, which did not reflect who the swan was pre-destined to be.
The swan was created to be a swan, which was its destiny; it was never created to be a duck. It was only after the swan understood who it was created to be; that the swan could emerge into the light. The swan was then able to step into its pre-destined role and allow its beauty to shine forth.
Likewise, our gift cannot shine if we are not living within our pre-destined roles. God placed a gift within each of us, but those persons who are intimidated by our gift, ascribed characteristics to us which we allow to alter our self image. When our self-vision is negatively altered, our gift becomes trapped within us and the person we were pre-destined to be remains obscured.
For this gift to be revealed we need to walk in the will of God. For some of us, this means accepting Jesus as our personal savior and for others it means totally trusting God to direct our lives. When we do this, we will emerge from our obscured state and walk in God’s marvelous light; in our pre-destined role.

Obscured
When God created the earth, He made two great lights, the greater light to govern the day and the lesser light to govern the night; He also made the stars and set them in the expanse of the sky to give light upon the earth (Genesis 1:16-17 NIV).
Both the moon and stars were created for the sole purpose of providing light during the night; yet there are times when their radiance is obscured by the clouds, covering the world in darkness. However, because their purpose is to provide light, they cannot remain hidden behind the clouds and fulfill their purpose. They must emerge from the obscurity of the clouds; then their brilliance will light up the sky and they would have fulfilled their purpose.
Each of us was created for a specific purpose, yet we live in a state of obscurity, and not as the person whom we were pre-destined to be. God did not create us to live in obscurity; He wants us to live in His light and in our pre-destined roles.
Like the moon and stars, our light cannot shine if it is obscured by clouds. The clouds of our insecurities, our limitations, our fears, our anxieties, our low self esteem, our self-hatred and the opinions of those around us. In order for our light to shine, we must emerge from the obscurity of these circumstances and hindrances and into God’s marvelous light, and allow the person we were pre-destined to be, to emerge.

In order for our light to shine, we must emerge from the obscurity of these circumstances and hindrances and into God’s marvelous light.

Throughout the bible there were men and women of God who lived in obscurity and not in their pre-destined roles. However, as these persons trusted God and allowed Him to direct their lives, God took them from behind the scenes, out of their obscurity and into His marvelous light; where He used them in remarkable ways.
Having emerged from obscurity and into God’s marvelous light, some of these persons quickly faded off the scene but they did not return to obscurity. They fulfilled their destiny, they achieved their purpose and their works has been spoken of throughout the years.
Eleazar and Shammah, two soldiers in David’s army emerged from obscurity, achieved their purpose and then quickly faded off the scene. God used these two men in a tremendous way when the Philistines attacked the Israelites.
As the Philistines prepared to attack, the Israelites became scared and retreated; but Eleazar stood his ground and struck the Philistines until his hand grew tired and froze to the sword; God use Eleazar to bring about a great victory (2 Samuel 23:9-10).
When the Philistines again attacked the Israelites, God worked through Shammah to bring about a great victory for the Israelites, by bringing Shammah from obscurity and into the light. Shammah, took a stance in the midst of the ground and struck down the Philistines (2 Samuel 23:11-12).
It was not always in physical battles that persons emerged from obscurity. There was the little boy who sacrificed his small lunch of five loaves and two fish and gave it to Jesus to feed five thousand people (John 6:5-13). This little boy was never mentioned by name; yet when he offered his lunch to Jesus, he stepped out of obscurity and into God’s marvelous light. Through the actions of this little boy, Jesus demonstrated how through our faith, He multiplies what we offer to Him.
The lady who anointed the feet of Jesus with her alabaster’s box after He had forgiven her of her sins (Luke 7:36-50); demonstrated the genuine love and gratitude she had for Jesus who did for her what no one else could. Her actions caused her to emerge from the darkness of her sins and into God’s marvelous light.
Whilst it may seem that these persons quickly emerged from obscurity the emergence of others took longer. Some had to undertake perilous journeys before they could emerge from obscurity and into God’s marvelous light and into their pre-destined roles.
Joseph endured the darkness of the pit, slavery and prison before emerging as a Prince. Moses endured the frustration of being born a Hebrew but educated as an Egyptian, raised as a prince yet he lived as a shepherd and as a fugitive, before emerging to be the deliverer of the Israelites. David was viewed as the insignificant son, he was anointed King but could not live as a King; instead, he lived as a shepherd and was constantly on the run for his life, before he emerged into his appointed role as a King.
Joseph, Moses and David were all ordinary people who were obscured, invisible and insignificant, but as they obeyed God; they emerged from the hindrances and circumstances that confined them and reveled in the marvelous light of God.
They were no longer entombed in their obscurity. Instead, they traded ordinary for extra-ordinary, insignificance for significance, invisibility for visibility and their obscurity for light. The person they once were, no longer existed; they had become the person they were pre-destined to be; they had stepped into God’s marvelous light and into their destinies.
What they had in common amidst all that was happening in their lives was a willingness to trust and obey God. As they did, they emerged from their obscurity and into God’s marvelous light; which they could only achieve with the grace of God.

We were created for a purpose, but in this constantly changing world, many of us become disillusioned by life and fail to discover our purposes and embrace our destinies. We meander through life, seeking to find ourselves and a meaning for our existence; yet we remain disoriented and unfilled. But there is hope. Our lives do not have to be like this; we can discover our purpose and walk in our predestined roles. The person God created us to be is within us but has become obscured with the trivial issues we allow to define us.

Author J. C. Johnson’s From Obscurity into God’s Marvelous Light: Finding the “You” that You Were Predestined to Be, demonstrates how answering God’s call on our lives empowers us to find our purposes and live in our destinies. When we answer God’s call, we embark on a life-changing journey. We are transformed and become the persons God intends us to be. We emerge from obscurity and into His marvelous light. Johnson uses her personal experiences and life lessons to inspire and empower us to travel our journey and to find and embrace the person God predestined us to be.

Are you willing to find who you were predestined to be? From Obscurity into God’s Marvelous Light: Finding the “You” that You Were Predestined to Be will help you find that person and leave a legacy that will impact the lives of others for generations.

J. C. Johnson, a Christian for over twenty years, is passionate about seeing people fulfill their purposes and living in their predestined roles. She enjoys reading, writing, hiking, running, and the beach. She currently resides in Barbados, British West Indies.