Evil in the Heart of Man 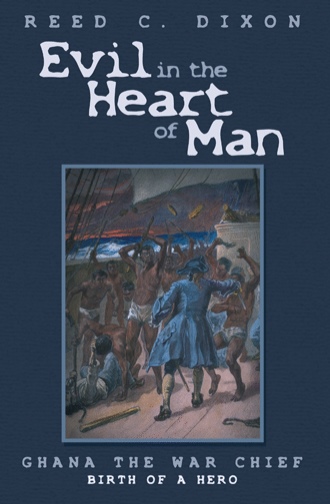 The birth of a child, how could one wish for anything more, a blessing, but this was more than a blessing, a blessing unbeknownst to my parents or anyone who was present that early cool morning in a small village off the coast of West Africa I was just like any young kid, born innocent and unaware of what life has to offer, but I would grow up with an inclination to love everyone and every creature that was born of this earth. I was respectful and courteous, even at my young age I despised the hate that some beings showed others. My name is Ghana, and I am growing to be a huge man with broad shoulders, at thirteen, I was close to being six feet tall and extremely intelligent for my age. I would never get to know my mom, for she died giving birth to me, but somehow I knew that she would gladly die a thousand times over for my survival.

My father, a proud warrior, had decided to take me on my very first hunting trip, unaware that this would be the last such trip. He loved me more than anyone or anything he had ever loved before, but on this day he felt a great need to discuss a vision he had the night of my birth.

“Ghana I must tell you about your mother, she was a loving women, she was extremely proud to carry you in her womb, she was overjoyed and ecstatic about the birth of her son, she held you so tight, and she just looked so happy, you would have thought that she had seen God. You became the last and most important thing she did on this earth, a wonderful achievement. She was a beautiful woman, and I loved her very much, she was the apple of my eye. Ghana you are to be a chief, a very special chief you will live a long life, you will do great things for years, you will experience history in a way that none other than you has or will ever do, you will do great things, you will not understand the meaning of fear, therefore you will show none, and you will have the power to help when the time comes, you will free others who have been hated, humiliated and persecuted at the hands of other men, their injustices will be their burden to carry, so just stay true to yourself. I will not be there to see you deliver so many from bondage, but my spirit will guide you through this odyssey, but on this day we will hunt so that we can eat and help others in the village, who are in need.”

Shortly thereafter we spotted a group of gazelle, my father motioned for me to stop while he would work his way around so that he could get closer to take a shot, we really needed this meat, we hadn't had any for many days. Just as my dad stood to make the kill, I heard a loud noise, bang, bang and I saw my dad go down, he had been shot. Then I saw two white men and a small band of black men, they spoke in strange tongues, they then quickly bound my dad and started off into the jungle, I followed them from a distance so I wouldn't be noticed. After walking for a hour or so we came upon a camp, and there were men from other villages, some were whimpering quietly, hoping not to be heard, at this time I began to feel a sort of pity for them, these were men of honor, men who would never be seen cowering like frightened women. This was the first time I had seen grown men crying and it really bothered me, they had touched my soul. “Wow, there's my dad, tied up in chains, even iron anklets around his legs, I knew then that it would be up to me, to save my dad from something that I knew nothing about, but what I was about to experience would be life altering, I would soon feel the pain and despair from others who were suffering, little did I know that this was just the beginning, and that I was trapped, and I had no idea how wide the arrogance and deceitfulness spread. “

A little after laying down I fell asleep trying to devise a plan, a plan to save my dad and get home, yes, find a way home. Early the next morning I awoke to the sound of birds singing, and the baboons making a commotion in the trees, as if they had spotted a predator nearby. There was only one thing on my mind, and that was to free my dad, who was chained with a group of warriors who had been captured, some of whom were whimpering and crying like frightened womenfolk, this was unbecoming to the men of the villages that I was accustomed to, warriors would never show their true feelings. Then I remembered hearing the old stories of the white slavers, men who seem to have no respect for black men or women, these slavers would take our kin to a far away land and make them do their bidding at the lash of a whip. I didn't care, I had to get inside the camp and free my father. As I began to sneak into camp all of my fears had subsided and I was not afraid of these men, these devils, for I was on a mission, a mission that would open my eyes to the cruelties of the world beyond my homeland. I moved toward the captured men, I thought this would be easy but one of the captured men was a plant, he was there to ensure no one escaped and he saw me!

“He let out a whoop and then yelled, Intruder, get him, get him or feel the lash of my whip on your bare backs.”

It was then that all the other men started running towards me, I took off, but it was too late, a net had me covered, I was now one of the captured, the men came upon me with clubs and cat o nine tails, they beat me unconscious.

First ever trilogy about a black superhero, an epic adventure, full of history and entertainment, it’s spiritualistic, uplifting, a classic novel.

In the early seventeenth century, Ghana is a thirteen-year-old boy from a village in West Africa. He and his father are out hunting together when they are captured by slavers and taken away from the only life they’ve ever known. Thus begins Ghana’s epic journey.

He soon finds himself living on a plantation and given the name Calvin. However, he will not forget his true name: he is African, he is a war chief, and his name is Ghana. As time goes on, he soon realizes he has been tasked by God to free all the slaves and to purge evil from the heart of humanity. Guided by a voice and aided by the supernatural, he frees himself and begins his mission. The voice tells him he will walk the earth, seeking justice for those who are in need. Although this goal may take him hundreds of years to achieve, Ghana is a determined warrior who will not give up. He must defeat the evil that exists in the heart of humanity.

This work of supernatural historical fiction follows the journey of one man as he works to overcome the evils of slavery in early America.

Reed C. Dixon was born and raised in Virginia. He served in the US Army for four years following his graduation from high school. He and his wife, Iris, have two children and currently live in Woodbridge, Virginia.