Exciting Times of an Ordinary Mormon 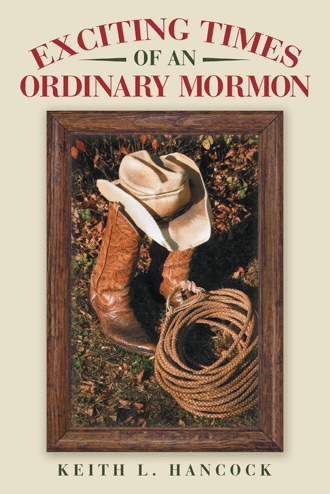 The Early Years of a Bouncing Baby Boy

We all have interesting lives if not exciting, filled with many ups and downs, good times and bad times as we grow and mature. Many of us feel that these things should be recorded for our own posterity if not for the general populous to read and to contemplate. For me, I have been recording a personal journal since 1979, going back and forth from my childhood to the present, and have found that I have lead a fairly full and interesting life in my 80-plus years sojourn.
I really have made no great and marvelous contributions to the world, but have lived a very active life, involving myself in a little of most everything that life has to offer an Ordinary Mormon.
My full name is Keith LaNay Hancock, named after my mother’s younger brother, LaNay Christensen. I was born July 12th, 1933 in a two room house that once served as a granary on the farm five miles south of the small community of Raymond, Alberta Canada. The old wooden granary had been moved into town on a one acre garden plot, where my father had rebuilt it into a cute little house for him, Mom, myself, and my two older siblings. My mother told me that being just two rooms, a kitchen and a bedroom, that she awakened in the middle of the night soon after, with the idea that the kitchen should be swapped for the area where the bedroom was, and that it needed to be done now, even at that hour. My dad never did like to make waves, and so went right to work making the change.
I was amused many years later to learn that my wife, Connie King was born three years after myself, in a house just a half a block away, with the same mid-wife attending us both. Connie tells me that when she was two or three years old, she landed many times in the irrigation ditch that ran past our garden, and thought perhaps I may have even occasionally pushed her in!
I am the second son of Alma Elisha Hancock and Mary Ella Christensen, one of six children. My father was a successful farmer in the day; however, like most of the world, was caught up in the great depression of the thirties. These were times of great struggle and broken dreams. After planting of grain crops, my parents told me that the grain sprouted and came up early in the spring, tall and beautiful when the lack of rain first took its toll, withering these tall full stems down to the ground. This heart break wasn’t enough. The strong dry winds began to blow relentlessly day and night, causing a virtual dust bowl in the otherwise picturesque prairies replete with tall grass, and hills alive with beautiful wild flowers and luscious fruit berries of every description. Many a good farmer had to simply walk away from these beautiful farms, bidding farewell to a happy life, their chosen life profession. My father was also struggling to keep food on the table for his family and hay in the barn for the animals. For a time, he was able to chop up fence posts used to fire up the small cook stove, and of course there was still water in the well. He was also able to obtain a bit of coal oil for a dim light in the tiny house. Having an overwhelming desire to care for his beloved family, he found it necessary to take part time employment at the Knight Sugar Factory, and therefore should move into town from the farm. My mother was a great support to him, helping with all of the meaningful chores and doing her part in bringing in a little extra money. Together, while living between the small rebuilt town property and the farm, they decided to build their own new little home on the west end of the acre lot, using any and all left over materials that were in excess from the newly built Sugar Factory, spending hours shaking bits of powder from hundreds of cement sacks, finding good used boards from construction forms or from any other source available. My mom made and sold dishtowels from unwanted sugar sacks, and braved her fears while helping to shingle the roof of the new house.

As memory serves, the first of many amusing stories told to me; when as a baby in a carriage, my parents were traveling across a long prairie wagon trail returning to the farm one evening with me riding in the baby carriage and loaded in the box of their buggy. Apparently the trail was very rough and the carriage I had been placed in bounced out of their buggy, baby and all. It was after they arrived at the farmhouse a mile later, before they noted this had happened. My older sister has related to me how upset they all were, and in her four-year-old mind thought that I was gone forever, and she couldn’t stop crying. The family then retraced their travels back in the dark to retrieve me, still in the baby carriage on the uneven terrain. I often joked should they have left me for the coyotes to raise, I may have turned out better!

Life is often filled with exciting experiences--ups and downs and good times and bad as one grows and matures. In Exciting Times of an Ordinary Mormon, author Keith L. Hancock recounts stories from his life as an “ordinary Mormon” who grew up during difficult circumstances on a Canadian farm and experienced his parents’ steady climb toward economic stability.

In this memoir, Hancock shares how he was called to serve on a mission in Argentina and later built a rewarding and adventurous life with his wife, Connie, and eventually their children and grandchildren. From playing by the river with his older brother Cal, to listening to Connie’s singing, to building a professional career and serving in his church, Hancock shares many of his life’s highlights.

From Hancock’s birth to the present, Exciting Times of an Ordinary Mormon narrates the story of a man who lived life to the fullest.

Praise for
Exciting Times of an Ordinary Mormon

This book, Exciting Times of an Ordinary Mormon, exemplifies the value and benefit of keeping a journal. Drawing from a lifetime of meticulous recordkeeping, Keith Hancock has written an engaging and well-crafted memoir that will stand as a legacy to his posterity. He weaves a fervent testimony through the account of his many accomplishments, the greatest of which, in his own words, is his family. Lessons on life abound within these pages and serve as a witness that his life has been anything but ordinary.
--Darrel Nelson, Author

Keith L. Hancock was born and raised in Raymond, Alberta, and became a Realtor. He and his wife, Connie, have four children.