Raised by a Village

Growing Up in Greenport 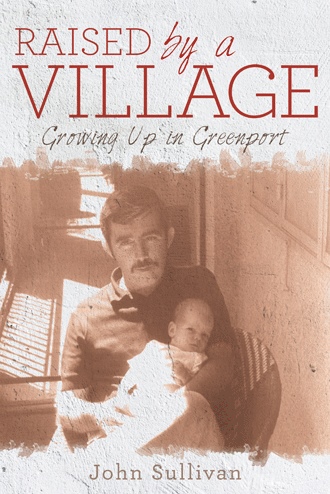 In 1996 Hillary Clinton wrote a book, It Takes a Village and Lessons Children Teach Us in which she cites an African proverb that posits, “It takes a village to raise a child.” If Mrs. Clinton were looking for a village in the United States to make her point, she could not have done better than Greenport.
In March 1999, while attending a funeral in Greenport, I had a conversation with Renee Vallely Carey. Renee was the older sister of one of my classmates, and I knew her and her three siblings, Peter, George, and Diane, pretty well. She and her siblings had been resettled in Greenport after they lost their parents.
During our conversation, Renee said, “John, I thank God every day for ending up in Greenport after our parents died.” Having arrived in Greenport under similar circumstances with my mom and older brother, Bill, I told Renee that I felt much the same way, and we spent a few minutes singing Greenport’s praises. That conversation got me thinking about writing a book about Greenport.
My idea got legs when, on September 6, 2001, The Suffolk Times, Greenport’s weekly newspaper, ran a front-page, feature article on me. The title of the article was, “Secret Agent Man,” and was in reference to my career with the CIA.
Ms. Julie Lane, who wrote the article, started her article with a quotation she attributes to me: “I am a poor kid who made good.” I am sure that someone interviewed by Ms. Lane for the article more than likely described me as a poor kid who made good, but I am just as sure that I never said those words to her or anyone else. Compared with those with whom I grew up, I saw myself as less well off. “Poor” is not an inaccurate adjective; just one I can’t remember ever using in describing myself.
Mom was forever telling Bill and me, as well as anyone who would listen, that we were too poor to buy this or do that, and I found it embarrassing. Anyone who knew me and my family back in Greenport would have to have been deaf, dumb, and blind not to know we were poor, at least in a material sense, and there was no need mention it.
Some of life’s necessities, like a “room somewhere, far away from the cold night air,” to quote Julie Andrews’s “Wouldn’t It Be Loverly” from My Fair Lady, three square meals a day, and adequate medical care, to name a few, would have been welcome additions to our daily lives.
There was also a dearth of what I at that time saw as life’s niceties, to wit: clothes other than hand-me-downs, a toothbrush and paste, a bathroom with a tub or shower, regular haircuts, and something to eat besides canned food, hot dogs, and hamburger. These things may have been in short supply, but there was no shortage of love or of feelings of being wanted.
The first time I ever heard anyone refer to me as “poor” was when I was in first grade. Bill and I were playing in front of our house when my neighbor’s niece and one of her friends were playing in the next yard. When asked by her friend, “Who are those kids?” she replied, “They’re poor people.” We were all pretty young at the time, and kids say things like that. I understand that now, but back then, it was a bit painful.
In the less-than-halcyon days of our youth, Bill or I could have been the poster boys for the ragamuffin child: much less than elegantly dressed, unkempt, and scrawny. We lived in substandard housing, and the three of us looked underfed. Impoverished image notwithstanding, Bill and I always felt as though we had a pretty good childhood in Greenport.
Last year, I attended an all-class reunion for Greenport High School and subsequently reconnected with Greta Levine Tedoff, a high school friend and one of the people who, along with her parents, made my life in Greenport a trip instead of a trek. She was living in New York City, and during a visit to see my younger son Jimmy and his wife, Mary, I and my significant other, Young, stopped in for a visit with Greta and her husband, Howard.
As we were reminiscing about Greenport, Greta suddenly said, “John, your family was the poorest family I have ever seen.” My sense as to what evoked this comment was that the 2013 version of John Sullivan was very different than the boy with whom she grew up, and as pleased as Greta was, she was having difficulty reconciling the two versions.

Author John Sullivan describes himself as an underachiever, much more driven by the fear of failure than the urge to succeed. Growing up in Greenport, New York, there were neither great expectations nor dire predictions as to how he would turn out. But many have been pleasantly surprised at his success; none more so than Sullivan himself.

In Raised by a Village, he offers both a thank you and tribute to the people of Greenport who helped him survive a challenging childhood and attain a degree of success Sullivan never dreamed possible as a child. This memoir describes a host of challenges including a lack of financial resources, a paucity of nutritious food, substandard housing, poor hygiene, insufficient medical/dental care, and negligent, but very loving, parental care.

Raised by a Village presents an up-close and personal picture of who Sullivan was and how he became the man he is today, showing he was not only was raised by a village but raised well.

John Sullivan is the second son of Irish immigrants who was raised by a single, welfare mother. He overcame significant obstacles to become a teacher, CIA polygraph examiner, and published author. He lives in Reston, Virginia.