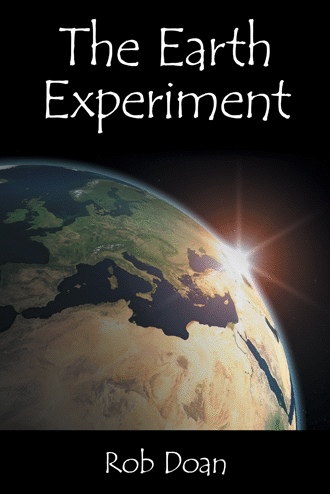 Wayne Chisholm figured he might make a deal with the Devil if he would tell him where he was and how to get home. He was standing in the middle of a God-forsaken crossroads that reminded him of Robert Johnson’s famous blues song with no inkling how he’d gotten there.

The roads stretched in straight lines, in each direction, as far as he could see. East-West was dull gray pavement full of small pebbles and rocks, the kind that if you rode a bicycle on it would transmit up the front forks and handlebars in a constant irritating vibration. North-South was blacktop that shimmered in the morning sun and smooth as a baby’s butt, but as the day wore on would get sticky. The landscape was almost flat, dotted with sparse greenish-yellow vegetation that was two feet tall, and full of lethal thorns and small black blossoms. A couple of lizards played tag under one of the bushes. It was the same in every direction. No clue or enticement that might favor one direction over another. No hints…none.

Wayne scratched his head, but it didn’t help. Neither did his third slow 360 degree turn. He gave a deep sigh and sat in the center of the crossroads. “Shit.” He cleared his throat and spit as far as he could. It landed on the edge of the blacktop, a Rorschach ink blot that reminded him of a bat in flight. “Maybe I’ll get lucky and get run over.”

Wayne’s life hadn’t been going too well lately. This might be as much of an understatement as Noah remarking that it looked like rain. There had been a streak of bad luck and some of it was his fault. Things like the loss of a wife to divorce, the destruction of his summer sanctuary in the mountains to a house fire, and during the same period, the deaths of some dear friends. Bitter jagged pills that were damn near impossible to swallow. Tough times at work too, the university where he was a tenured, full professor of psychology. It was a place he once felt safe, but now was one person too many. And, a too-old father trapped in a used up body, marking time and waiting for death to release him from a physical hell. Yep, it had been a rough two years.

Not to mention what had happened on this very day, starting at 2:30 a.m. He was stumbling half asleep through a dark bedroom to take a pee, stubbed his little toe on a vacuum cleaner, and heard a loud snap as it disjointed. It was three times its size by morning. To add insult, at 8:45 while he was backing out of his driveway to go to the doctor about his toe, he ran smack dab over a cat. It belonged to the five year old daughter of his neighbor and she watched the gruesome event unfold. She plopped down in her front yard and commenced caterwauling. “You’ve killed Mr. Pebbles,” she sobbed, head thrown back so all he could see was an open mouth full of teeth. “What am I going to do, you’ve killed my Mr. Pebbles!”

He got out of the car to take a look, and sure enough, she’d summed up the situation dead center, the cat was dead-dead-dead. It looked like a well-worn Frisbee with a tire track across its middle. He peered at the girl, at the big salty tears cascading down her cheeks, and mumbled something about being real sorry. He moved the cat to one side leaving a vivid trail of red-red-red blood and guts and as he got back in the car stubbed his toe, and yelled, “Oh lord, damn me to hell.” That quieted her for an instant. He took advantage of the silence, backed out, and headed down the street. Didn’t take him long to realize that the car was fishtailing due to one of the rear tires going flat. “Probably a damn cat claw,” he muttered and drove on, motivated by the escalating pain in his throbbing toe.

By the time he got to the doctor’s, the tire was ruined and the parking lot was full, so he parked across the street and tried to one-leg hop through the traffic. He underestimated how much this would slow him down and a gigantic four wheel drive pickup almost hit him. The driver compassionately gave him the finger, and shouted, “Get the hell outta the way, you moron!”

He was greeted in the office by the receptionist who smiled brightly and said, “Hi, Wayne, how has your day been?” So he decided to tell her.

Before he could finish his vivid account, two policemen entered, explained their actions were at the request of the doctor who owned the office, and ushered Wayne out. The doctor didn’t appreciate sentences that had three curse words for every ten…and was upset that his once full waiting room was empty.

He tried to explain that his toe needed medical attention…especially now that one of the cops had stepped on it. Outside, the larger of the two officers saw it as his civic duty to deliver a cautionary tale to Wayne concerning the type of man he was in the process of becoming if he didn’t change his ways, his tune, and his attitude. And by the way, was he the same guy they’d just received a call on about killing some poor little girl’s cat?

Wayne stepped back two paces and looked the guy square in the eyes. “My way is to go to the doctor, my tune is the broken-toe-blues, and I’ll admit my attitude is getting worse by the minute…some of which is due to you sonsabitches.”

Although Wayne had never seen the inside of the city jail, he was disappointed…especially when they put him in a cell with a foul-tempered black dude who was in for being high on crack and in the middle of his own spiraling crash. As soon as the door shut, the guy raised his eyes from where he was sitting on a dirty-with-brown-stains cot, and said, “What you lookin’ at, white boy?”

Wayne gave what he thought was a diplomatic reply, and softly said. “It sure as hell isn’t going to be you.”

That’s how he managed to match his three-times-now busted toe with a blood-gushing broken nose caused by a punch that propelled him into the wall.

He slid down its dirty surface and passed out.

Professor of psychology Wayne Chisholm has been having bad luck lately, although at least some of that is his own fault. Divorce, a house fire, and the deaths of some dear friends have marked his recent past. And now he awakens to find himself inexplicably in a strange land, guided by a woman named Evie.

Evie explains to Wayne that Earth’s history is not what its inhabitants believe. They have no idea they are subjects in the Earth Experiment, a millennia-old effort by the government of the planet Atlantia to save Earth from itself—and from the clutches of the rival world of Satonia. Recent political unrest and debate has arisen on Atlantia, however, and the Earth Experiment is in jeopardy of being halted—which would leave the door open for Satonia to step in and help itself to Earth’s natural resources. Evie is an Atlantian emissary engaged in a last-ditch effort to salvage Earth before it’s too late, and she is looking to Wayne for help.

Against all odds, caught in the interface between the two planets and their agents, Wayne begins to uncover an incredible truth that will change his life forever and that could save the earth—if he can survive long enough.

Rob Doan is a tenured full professor of psychology at the University of Central Oklahoma in Edmond, Oklahoma. He has numerous professional publications, but this is his first novel. He is also a singer/songwriter who has performed professionally. His favorite places are the Rocky Mountains and the Oregon coast.