Meet Me by Moonlight

The Lost & The Fallen: Book One 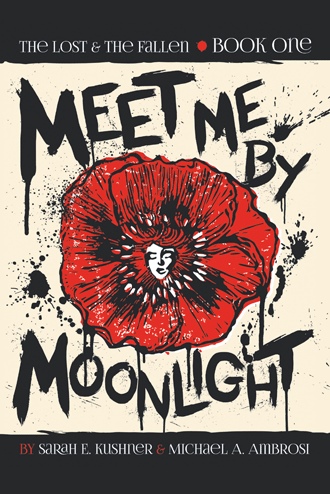 As one crossed over the edges of the desert, rolling slowly through scrub brush, one could assume that the great vast nothing was just what it appeared to be. Nothing.

However, if one knew where to look, one could find water, food to eat, and of course silver. This knowledge of silver, or at least the hope of it, brought with it outcroppings of mines. Surrounding those mines were the miners living in camps comprised of tents and lean-to’s. These pitiful dwellings, as time went on, became small towns with small, ratty, wooden buildings. With luck, as a town would grow, so would the niceties, and up would bloom a fine city.

Men came west for fortune, for legacy. They came from all stations in life, all colors and beliefs. They came to Nevada, California, Arizona, anywhere that the shining hope of silver, or gold, was discovered at the slightest vein. The hope scattered here and there between the furthest east and the furthest west. These towns came and went. They either turned a profit, or they disappeared into the landscape of dust and scrub brush, the men scattering and moving on to hope elsewhere.

Then there were the towns that gave out just enough, little by little every day, that hope held on, even if it was by the tips of fingernails. The hope for a mother load. A shining new life, gleaming, bright and heavy in your hand. Among these towns was Silver Bough.

One could cross over those outer edges of desert and miss this town entirely. The scrub brush, desert willows and grasses would be all you would see for miles. A sparse covering over hills and out into the distance, their scent filling every space in your lungs with their wild seductive spice until it coated your skin and hair with its perfume. You may have begun to assume the desert would never end, that the world would be consumed with sage and sand. But, if you turned up over one particular hill and rode up the faint trail that hid there up to the top, Silver Bough would unfold before you.

No one was quite sure who found the first palm full of silver in that place. The papers in 1846 mentioned briefly that one very lucky Greek man heaped up his fill of silver into a wagon, there in the middle of nowhere, and then just up and left. But that winsome bit of fairy tale danced at the minds of men far and wide. Silver, hope, ready for the taking. All that had to be done was head out west.

So, head out they did, in a great optimistic wave of men. Some men sought their fortune, a turn for a better life. Some others sought freedoms that weren’t allowed them in the east. Seekers of adventure. Seekers of the wild and unexplored. But, mostly, they sought fortune, or the hope thereof.

There were also, sailing along the wave of hope with the would-be miners, other seekers of more reliable fortunes. Hard working men needed tools, pickaxes, boots and hats. Men needed food. Men needed beer and whiskey. For each and every desire, there was a provider of that which was needed.

Even more than the whiskey, though, men needed women.

Inevitably, as with all towns of the sort, after that first crashing wave of men, came a second wave of women to fulfill each lonely mans’ desires. The women, with their plenitudes of voluptuous charms, came for many more reasons than the men came for. Some with choice and some without. Some sought the men that sought the fortunes. Some came for a yearning and desire that never came to pass in their former lives. Some came for freedom, and some became trapped in bondage. Some boarded wagons west by trickery, and some came with eyes wide open.

The center of the town, or at least this town, as it unfolded before you when you first crested that singular hill, was what it’s owner only half laughingly termed “the town hall.” More than a saloon, more than a dance hall, it was somewhere in between, with the bulk of it being mostly brothel. It was of course a far cry from the finer parlor houses in towns where many of the men came from, but no one minded the lack of formality. Not here. When it came down to it, no one missed quiet prattlings, recitations or songs from more demure sorts of harlots. As weather turned bitterly cold, one didn’t care about the lack of paper upon the walls or rugs on the bare board floor. One doesn’t mind a lack of finery as long as there is liquor in the belly, and the warm body of a woman to share a bed. Nor did anyone mind the raging heat of summer when a beer was held in one hand and a girl sat upon a knee; where one could more easily observe her mopping up beads of sweat from exposed décolletage with lovely, seductive grace. Neither did the women mind mud on their boots and curses upon everyone’s tongue, not so long as there was money in their hand and a roof over their head.

As long as the proprietor of the establishment kept drink and women on hand, no one minded much of anything at all.

This town had a reputation, Silver Bough did, for being the loudest and most raucous of any of the mining communities anyone had happened to visit. It earned the name “Devil’s Bough” for more than one reason, and not all of it sinful. There were more women here than most, more drinking, more dancing and no piety. No one went to bow their heads at church on Sunday to repent.

There was no church.

Some various denominations had come in now and then and set up tents, and for the man that ran the house of sin in Silver Bough, this was bad for business. Piety brought remorse and regret and fewer nights spent wasting spare funds on more licentious activities. This could not be tolerated. One by one, each pastor, preacher or priest that came in, was convinced to leave, or became swallowed up by sin themselves.

And so, Silver Bough sat day by day and year by year, settled slyly in the hills of the desert expanse. The stars cycled by with the seasons through ice covered winters and summers in hell. No one ever really thinking further than day by day and how much silver they could take from the earth and immediately spend.

Within this place of dirt and filth, one could on occasion lift their eyes to one of the upper windows of the “town hall” and see the visage of an angel. An angel of sin, but an angel no less. A single rose, blooming in the center of the depravity and din of the failing world around her. The Rose of Silver Bough.

Her mother called her “the Devil’s girl,” and Grace grew up believing it. She now works in a brothel in the failed mining town of Silver Bough with nothing to look forward to but the slow fade of day into night. Soon, she’ll be too old to keep around, so Grace feels her only recourse is to trick a man into loving her and whisking her away from her life as a whore.

Grace teeters on the edge of madness and despair. Some nights, she imagines herself wandering into the wilderness, never to be seen again. She’s in dire straights; her only options are a loveless marriage or disappearing into the desert to face certain death. Then, everything changes with the arrival of a mysterious stranger who claims to know all about her past.

This stranger wants to show her who she really is, but Grace finds the truth crazier than fiction. She’s flung into a world of dark forces, frightening apparitions, and near-certain destruction. Does she have the strength to survive her own fate? Will she allow others to control her, or will she draw on her inner power to save herself and rise about the lost and the fallen?

Sarah E. Kushner is an artist and art director in Los Angeles, California. Meet Me by Moonlight is her first novel.

Michael A. Ambrosi is a freelance writer and advice columnist. He also lives in LA.