And the Enticement of Divorce 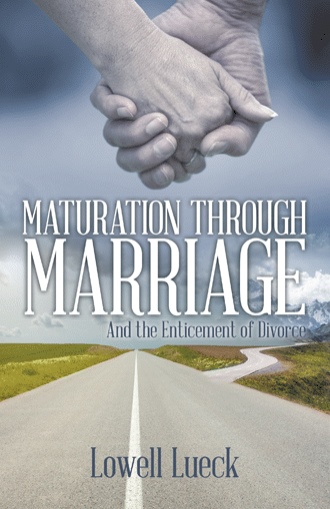 MARRIAGE, THE PATH TO TRANSFORMATION INTO CHRIST’S IMAGE

“The man said, ‘This is now bone of my bones, And flesh of my flesh; She shall be called Woman, because she was taken out of Man.’ For this reason a man shall leave his father and his mother, and be joined to his wife; and they shall become one flesh.”
Genesis 2:23-24

Then the Lord God said, “It is not good for the man to be alone; I will make him a helper suitable for him.” Until now, everything God had done in His creation was described as good, but it was not good for mankind to be alone. In the New Testament, the Apostle Paul reiterates this point: “But because of immoralities, each man is to have his own wife, and each woman is to have her own husband” (1 Corinthians 7:2).

The common understanding of the importance of the union of male and female is for the propagation of the species. God's directive, “Be fruitful and multiply, and fill the earth...” (Genesis 1:28), certainly supports this point. One the other hand, there must be a more important concern here because He certainly could have planned for mankind to populate the earth in similar fashion as do the lower forms of life. About 85% of the animal kingdom mate indiscriminately. Only about 15% of the animal kingdom is what we might refer to as perfectly bonded in the sense that they mate for life as God commands for men and women. Only humans spend about 18 years in rearing their offspring. Most lower forms of life prepare their offspring for adulthood in 2 or 3 years or less. There is obviously a more important reason for the marital union of man and wife than propagation of the species.
In the New Testament Paul writes more on this topic. He reveals that marriage is certainly important for more reasons than populating the earth. In the first book of Timothy Paul tells women under the age of 60 years (long past child bearing age and comparable to 85 years today) that they should remarry instead of being put on a list of those widows to be taken care of by the church.
9A widow is to be put on the list only if she is not less than sixty years old, having been the wife of one man, 10having a reputation for good works; and if she has brought up children, if she has shown hospitality to strangers, if she has washed the saints’ feet, if she has assisted those in distress, and if she has devoted herself to every good work. 11But refuse to put younger widows on the list, for when they feel sensual desires in disregard of Christ, they want to get married, 12thus incurring condemnation, because they have set aside their previous pledge. 13At the same time they also learn to be idle, as they go around from house to house; and not merely idle, but also gossips and busybodies, talking about things not proper to mention. 14Therefore, I want younger widows to get married, bear children, keep house, and give the enemy no occasion for reproach; 15for some have already turned aside to follow Satan (1 Titus 5:9–15).

Obviously there are cultural issues to consider in the application of this passage and yet I believe there are universal principles to be applied to our culture today. Apparently singleness is not meant to be an excuse for a carefree lifestyle of selfishness. It is very common for Godly pastors and Christian counselors to suggest that some people are just not suited for marriage; especially since our divorce rate is so high. These very people who are not suited for marriage are very likely to be the same people who are not maturing as Christians, unless, of course, they have the gift of celibacy; otherwise why would God and the Apostle Paul say it is better to be married? According to the scripture passage quoted above, it would seem that advice to stay single because of unsuitability for marriage could more likely lead to a life of self-indulgence than a life of Christian maturity. Certainly, for many reasons, it is far easier to remain single, but is this the best path to Christian maturity? As a single Christian I can remember how much easier it was to float in and out of romantic relationships and friendships. When the mirror of another person reflected unpleasantness or even constructive criticism back to me, it was quite easy to avoid the mirror with some justification to end the relationship. God designed marriage with the important component of commitment which requires God's grace to continue to use the mirror of others to improve our Christian character and prepare us for eternity. Someone once said, “Marriage is a commitment to an imperfect person.” How true it is that God can use someone who is so different from us to help us be transformed into His image.
Paul says that singleness is restricted to those with the gift of celibacy and those called to undivided devotion to the Lord's work, like himself or perhaps similar to one like Mother Theresa. The fact of the matter is however, there are thousands upon thousands of people who are single for reasons other than these. Don't infer from this that I am saying that the Church should blindly pressure these people into marriage. What I am saying is that we need to help people understand God's complete purpose for marriage. We need to empower people to access God's grace so His power can be released in their lives to develop the skills of married life that results in Christian maturity, transformation into Christ's image, and preparation for eternity.
Shared intimacy is one of the most important qualities of life that can best be developed through marriage. The word, intimacy, is sometimes used to refer to sexual relations between husband and wife but this not what I am referring to here. Intimacy is experienced as we gain access into the inner soul of another person. It is a degree of awareness and true knowledge of another person that may come only after many years of close personal mutually shared contact. It includes knowledge of another person’s thoughts, dreams, feelings and fears. It is knowledge of another person’s needs and a genuine desire to meet those needs to the extent that one is able. Truly, one of my favorite definitions of love is meeting the needs of another person, which should be an essential goal of marriage.
The fact that intimacy is best nurtured and developed in marriage can be explained by sharing a marriage counseling case with you.
After only two years of marriage, Rachel and Bill (not their real names) were having serious problems. They would do fine for several months at a time, but inevitably, as intimacy increased it always became perceived as a threat and a source of insecurity to Rachel. When this happened, she would totally reject or abandon Bill, citing unbiblical justifications for her actions and respond totally based on her feelings.
During the course of our counseling sessions, I had discovered that a difference between Rachel and Bill was her reluctance to participate in adult Sunday school classes that were offered by their church. Their church, as is true of most Evangelical churches, emphasized the importance of these groups for deeper spiritual growth. Much can be learned by sitting in a church pew in the back of an auditorium, especially if your church has a gifted pastor-teacher preaching and teaching God's word. Real spiritual growth, however, most often occurs as the Godly principles taught in the Sunday sermon are nurtured and applied by the accountability and encouragement provided by groups small enough for eye to eye contact. Our eyes have been called the windows to our souls and therefore spiritual growth can be measured by accessibility to our soul. Genuine spiritual growth can best occur because true intimacy is allowing trusted people in to me see (intimacy).

At first look, it seems logical Christian maturity and preparation for eternity would go hand in hand with marriage. But when one delves deeper and takes a look at statistics, it does not always work that way.

Maturation through Marriage: And the Enticement of Divorce takes an honest look at author Lowell Lueck’s theological and spiritual reflection on the texture and contours of the fabric of his married life. It does not shy away from honestly portraying his sins but balances those statements of shortcoming with equally powerful reminders of the consolation and guidance from the Scriptures. Lueck found faulty applications or fundamental violations of Biblical principles by Christian spouses and the Christian church have allowed the tragic destruction of families. Lack of adaptation to no-fault divorce statutes; frustration of trying to apply biblical principles to our twenty-first-century Western worldview of love, dating, and marriage; and the unwillingness of the church to uphold Godly encouragement and accountability are some of the issues Lueck addresses. As a Christian marriage and family therapist with two failed marriages, he writes from an insider’s perspective and with a willingness to share his shame of these experiences and also his deliverance from the false guilt that he had carried.

Written in an easy-to-understand manner, Maturation through Marriage: And the Enticement of Divorce is not just theory. Based upon the author’s firsthand experience, this book can help you deal with the same or similar issues.

Lowell Lueck earned an MS from California State University, Bakersfield, and a ThD from Summit Bible College. He has done postgraduate work at Dallas Theological Seminary and served two years with Campus Crusade for Christ, International. Lueck is a board certified Marriage and Family Counselor. He is the father of two children and has five grandchildren, living in Bakersfield, California. Lueck can be contacted at www.psychologytoday.com or lolueck@gmail.com.