How to Make the Art of Healing Healthy Again 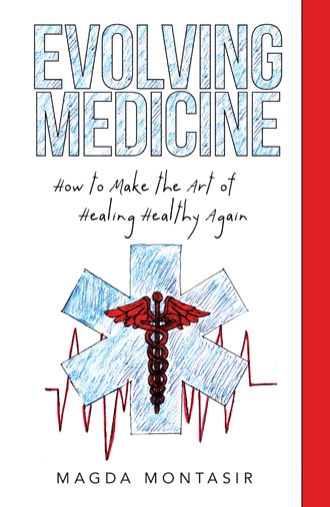 1) The readers can then figure out for themselves what important factors are in improving the health care system, and decide what changes they would like to be made. They may develop preferences for what is added or deleted from the present version of the Affordable Car Act so as to lower the cost while improving the care for each individual emphasizing preventive, diagnostic, and curative measures.

2) Our instructors taught us to look at the patient’s face you may see pallor and would therefore need to search for anemia or blood loss. Look into the patient’s eyes and if there is yellow coloration    test for liver or gall bladder disease reflected by jaundice; bluish discoloration of the lips can signal hypoxemia (lack of oxygen); a whitish coated tongue could mean dyspepsia. “Do not hesitate to hold the patient’s hand” they told us. The person may be cold, or you could feel a rough skin or tremors.

3) Ibn Sina defined medicine as: “the science by which we learn the various states of the body, in health and when not in health, the means by which health is likely to be lost, and when lost likely to be restored. He also referred to it as an art: it is the art whereby health is concerned and the art by which it is restored after being lost.

4) Instead of all these medical technologies, I wish to discuss the great paradigm shift that started in the second half of the twentieth century, continuing rapidly till the present time. During this time the practice of medicine changed from a one on one relationship between physician and patient and expanded into a complex medical field, because of the massive new technology. Medicine had formerly depended on the (art of healing), doctor’s observational and interpretational skills and became increasingly dependent on diagnostic technology and advanced curative methods.

5) Endoscopy was another great contribution to modernize medical diagnostics, it changed the mode of examining patients from the old method of : inspection  (viewing) ,palpation (feeling) percussion (tapping) and auscultation (listening), the way we were taught, to the new idea of introspection, to look at the inside story.

6) Albath, proud of his involvement in laboratory medicine he said, “Recent history can be described in three words, Mechanization, Automation and Digitalization”. The way he described the advancements  in surgical techniques like keyhole surgery meaning laparoscopy was interesting, he referred to  the use of laser as, “it lit up the medical sky”

7) Molecular testing is fast becoming standard in clinical laboratory testing, and pathologists who trained to use it are doing a great favor to their clinician colleagues and their patients For example when statistical studies of patients were analyzed it was found that treatment decisions had to be changed according to the analyses results in 45% of the time and recommendations for chemotherapy fell from 52% pretesting to 30% afterwards.

8) Our DNA is static but our proteins are dynamic. Proteins are the main components of the physiological metabolic pathways of cells, that is the chemical reactions within each cell that often needs minerals and vitamins as an assisting co factor to keep “homeostasis”, “equilibrium and stability”. In other words they need to stay healthy and maintain a balance between catabolism, “break down” and anabolism “synthesis and building up” pathways.

9) When you have trouble with your car you take it to a mechanic who will fix it, the car is manmade; but when your body or one of your organs loses one of its normal functions you do not know where to start. Doctors and researchers still have not entirely figured out how our Creator made us.

10) And now I can tell my curious granddaughter, I can imagine a future where babies can easily be made in test tubes, then implanted into the mother’s womb; I can imagine a world where lenses and hearing aids can restore senses, a world where rusty joints can be replaced; a world where there will be no child left to die, no organ left to fail, and no person left to age. Isn’t that eternity.

11) Many pose the question whether high-tech medicine is a misuse of resources or a miracle maker; are Americans over treated. We know what health care was like in the 60s and 70s, there is now doubt that we are doing a much better job now, partly because of advanced technology, and because of public awareness of its availability, the “Katie Couric effect” attests to that.

12) The founding father Thomas Jefferson was wary of government power. His views of laissez-fair dominated, and the idea of freedom for private enterprise prevailed. One of Jefferson’s famous sayings was, “The government is best which governs least”. This philosophy combined with the philosophy of social Darwinism (survival for the fittest) kept the government from interfering in ameliorating people’s hardships.

13) The American Medical Association adopted the first code of ethics in the USA in 1847. It concentrated on four main issues. The first was (autonomy) meaning the patient has the full right to choose or refuse any treatment. The second was (protection) meaning one should act in the best interest of the patient. The third was (do not harm) and this is self explanatory. The fourth was (justice) and that included fairness and equality in distribution of health resources and decision of who gets what and this has not been established or achieved till our present time.

Doctors used to have personal relationships with their patients, but now they must contend with the government, third-party payers and the massive health care industry.

Magda Montasir—a medical doctor—looks back four generations and outlines how medicine has changed—and not always for the better. She considers questions such as:

Is the Affordable Care Act an equitable health care system?

What can be done to make health care more affordable?

Can we really make preventative care available to everyone?

How long should we prolong life and under what circumstances?

Is health care every person’s right, the governments’ obligation to provide, or a free business enterprise?

Even laypeople will get a full sense of how the medical profession works as well as how its code of ethics has changed over time. Moreover, the author also examines how other countries approach health care so that Americans can make an informed decision as to what changes—if any—they’d like to see made to the Affordable Care Act.

Take a fascinating journey highlighting the external influences on how we practice medicine, and consider how to improve the system with Evolving Medicine.

The author is a retired medical doctor. She studied, practiced, worked in research projects and taught in USA and abroad. She has a doctoral degree in Tropical Medicine and Infectious Disease, and is Board Certified in Anatomical and Clinical pathology, and was the director of a hospital laboratory. She used to be a member of several medical associations including Tropical Medicine and Hygiene, American medical, Arab American Medical. The only membership she is still keeping is the College of American Pathologists. She published several articles in Egyptian British and American medical journals.

Realizing the difference in the practice of medicine between three generations of physicians in her own family and comparing health care systems in different countries she started to examine the history of healing and found it fascinating to write about and wonder about how its future will be.

She is the anonymous author of “Biography of an unknown”