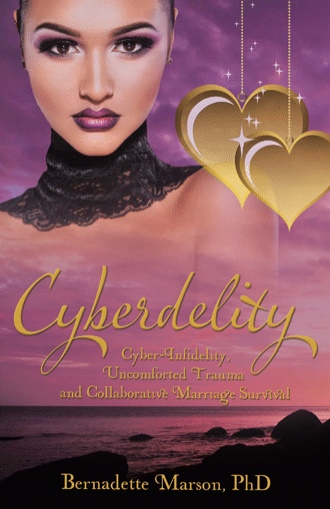 Once, Kerrie and Jeff were blissfully in love. All they needed was each other.

But after Jeff was deployed, Kerrie became a lonely woman. Starved for love, affection, sex, and attention, she tried everything she could to refill her love tank in his absence. But her cravings and needs only intensified. Torn between her marriage vows, a missing husband, and her raging desires, she resolved to find a temporary fix through online dating.

In that moment, Cyberdelity—her online persona, a mating of cyber and infidelity—was born. The response to her posting was enthusiastic, and Kerrie bounced from one failed cyber-relationship to another. Increasingly disillusioned by the realization that these men only wanted sex, Kerrie became an angry, vengeful, and ultimately a self-harming woman. In response to her arrest following a suicide attempt, Jeff took a leave of absence, but it didn’t take him long to realize that Kerrie was far from the faithful wife he thought he had left behind.

Kerrie thought she was being discreet, but her escapades were more public than she thought. Her betrayal discovered, her devastated husband back on active duty, and her sense of self shattered, she fell deeper into depression. Kerrie sought mental-health treatment, where her traumatic childhood and another well-kept secret were revealed.

Upon his return from deployment, Jeff had his own demons to battle. His scars ran deep, and PTSD now defined him. Can these two wounded souls find redemption together?

Bernadette Marson, PhD, ACSW, LCSW-R was born in Trinidad and now resides in New York. She is a graduate of Adelphi University and Walden University. Dr. Marson is a licensed clinical practitioner with extensive expertise in human service administration, mental health, clinical consultation, and higher education. She is the founder of Marson LCSW & Consulting Services, PLLC. Additionally, she is a professor, private practitioner, motivational speaker, life and executive coach.