The Burdens of Wealth

Paul Getty and his Museum

by Burton B. Fredericksen 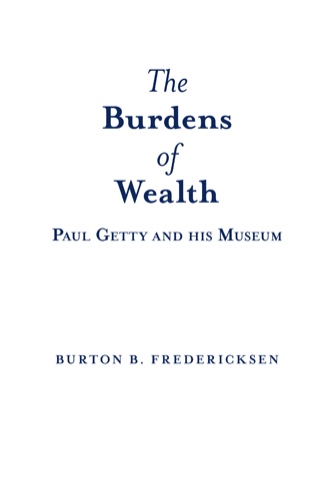 The creation of Paul Getty’s museum in Malibu in the autumn of 1953 was so abrupt and unceremonious that no one at the time could have guessed that it would one day grow into one of any importance. Its debut was both modest and deliberately inauspicious, with the result that its very existence was hardly noticed until well into its second decade. The birth could be compared to that of a child conceived out of wedlock, an offspring about whose origins the parent felt some uneasiness. But it was not the aftermath of a momentary enthusiasm or even a long and complex affair—rather a decision taken on the advice of counsel and meant to satisfy an immediate need of the father. Then, like Getty’s five children who preceded it, the museum was left to be brought up by others and so would come to lead a stunted and unstable existence for much of its early life.

Private institutions necessarily bear a resemblance to their founders, and Getty’s museum—which is now much more than a museum—is no exception. But over time it has evolved in ways that its parent would not have condoned. This evolution, still in its early stages, has been far more erratic and unpredictable than might have been imagined, and it continues to change direction in ways that make plain that it has not yet succeeded in finding its proper role.

An intimate history of the Getty Museum from its early relatively modest days until it unexpectedly received the endowment that made it the world’s wealthiest museum and eventually a private foundation of worldwide influence.

Following the death of Getty in 1976 it was necessary to adapt the institution to radically different circumstances and much higher expectations, virtually none of which had been anticipated. This evolution was guided by some of the most prominent managers and historians available, but was also marred by some unfortunate and widely publicized mis-steps that made the transition unusually erratic.

Institutional histories are normally written and published by the institutions themselves, with the result that its blunders or mistakes are normally glossed over. The present memoir is meant to be an objective and relatively frank appraisal of the history of this exceptional institution by an early participant in the process.

Burton B. Fredericksen was curator of the Getty Museum in Malibu, California, and was closely involved with its evolution during Paul Getty’s lifetime. He would become chief curator and then director of the Getty Provenance Index, a department of the Getty Research Institute. He retired in 2001.