Retrospections of an Aviation Cadet 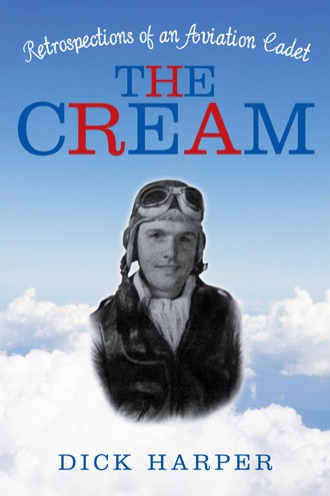 I have him in my gunsight. HIM, that murdering Nazi psychopath with the truncated mustache and the evil eyes; the maniac who has Attila-like plundered most of Europe and is intent on conquering the rest of the world. At an altitude of fifty feet, a range of two thousand yards and a closing speed of more than three hundred miles per hour, I recognize him. Strange; I wonder how I can see this well. But there he is in the rear seat of a long, black, six-wheel Mercedes touring car, with the top folded back just like in Fox Movietone newsreels. On each front fender a blood-red banner emblazoned with a black swastika within a white circle ripples furiously in the driving wind.

He sees me and stands up, waving his arms frantically. His body is covered in a long, black leather SS-type trench coat; a Nazi-emblem-bedecked black garrison cap sits jauntily on his head; his eyes protected by dark goggles but still somehow staring imploringly into mine.

Time slows to a snail's pace, as though I am flying through molasses, as though events are being exposed one frame at a time.

I am cold, freezing cold; I have never felt so miserable and uncomfortable in the cockpit of my P-38 Lockheed Lightning. I survey the cloudless sky above and the frozen, snow-covered earth below and remember why I am so cold. The canopy has been blown away, and the glacial January wind of northern Germany is whipping wavelets in my exposed cheeks. I feel the warmth of blood flowing in rivulets from my head, congealing alongside my left eye. My left arm is hanging numb and useless at my side. At eleven o'clock low, I see the cause. The steam locomotive I have just blasted sprawls crumpled across the tracks; rail cars, zig-zagged into a steel accordion, lie in crushed heaps behind the smoking ruins. Steam and smoke, blended into a murky-gray vapor, rise at least three hundred feet in the frigid air.

I had attacked from the rear of the train, and from the caboose to the engine I stitched it with my fifty calibers. The engine I blasted, and when the boiler exploded, I had flown hell-bent through the explosion. I do not have the slightest idea what blew the canopy off of my airplane, but something had torn it away and bounced it off my head and shoulder. I had made a one-eighty to assure myself of my kill and then I saw HIM. Time is dragging. What is happening? The twin Allisons roar smoothly but the propellers seem to be rotating in slow motion. What is wrong?

I know I have enough ammunition for at least one two-second burst, maybe even three seconds.

I center my gunsight on that despised visage. I see his face clearly; his pleading expression. He is begging, "Dick. Dick. Please. Please!" I hear his every word, even through the deafening noise of the screaming engines. Why? He knows my name. How?

Time crawls. I squeeze the trigger on the control wheel. I see each fifty-caliber round as it leaves the gun barrel; a stream of death from each of the lethal, nose-mounted machine guns. Streams which converge on the Dictator of Nazi Germany standing in the rear of the Mercedes staff car and blow him straight to hell. His head literally explodes; he flies over the folded-down top, hits the paved surface of the road, tumbles end over end, bounces clumsily off a snow bank and comes to an inglorious rest in a muddy roadside ditch. Strangely, his hat and goggles are still in place; his dead eyes still burning into mine.

I lower my sights and concentrate on the huge Mercedes logo emblazoned on the grille of the speeding automobile. A short burst from my smoking fifties and the job is complete. The entire car disintegrates and blows chunks of scorching steel into my flight path. In ultra-slow motion, I fly hell bent into the airborne debris.

I am cold; oh, so cold. Why? Oh yes, the canopy is gone. Why is it gone? I just cannot remember. What is wrong with me? My left arm is numb; my aching head throbs with every beat of my heart. My P-38 begins to vibrate, but the strange time elongation slows the vibrations.

On January 27, 1943, nineteen-year-old Dick Harper received orders to report to

Miami Beach, Florida, to begin Aviation Cadet training, with the lofty goal of

security of his hometown of Greensboro, North Carolina for strange, unknown

places and an uncertain future, with the ultimate purpose of fighting a war.

It was a huge turning point in his life.

In The Cream, Harper offers a retrospective of his personal experiences

in Aviation Cadet training during World War II. He details his odyssey

and exciting days and months of pilot training. He shares the disappointments

and triumphs, humor and pathos, of his quest for the coveted Silver Wings of a

combat pilot. He provides a frontline, inside view, of the rigors and exhilaration

A memoir, The Cream narrates the hopes, frustrations, camaraderie, and

ideals of the young men who earned, or attempted to earn, Silver Wings as pilots

Harper had a career of more than forty-five years in the oil business as an engineer, a senior officer of a major corporation, and owner of a petroleum consulting corporation.

Harper and his wife Nell live in Houston, Texas. They have a son, a daughter and three grandsons.