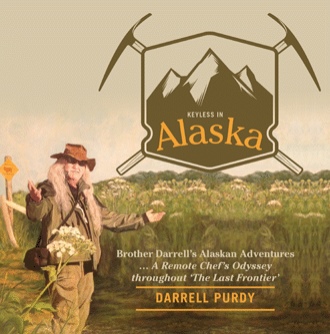 This ad for a cook showed up on the state’s job center listings and I couldn’t get to a fax machine fast enough.  This was the perfect job for the summer.  I love to pan for gold and Chicken, Alaska, is one of the best panning areas in the state.  Klondike Cliff and I had been trying to go there for years, but one thing or another got in the way.  Now here was a reason to go there—work.

Cliff, of course, insisted on driving me and we would go early by a week, and prospect.  So, I sent my resume and went home and called Susan.  We talked for about a half hour, she in Fairbanks, me in Seward.  By the time we were done, I had the job.

Chicken is located 85 miles north-east of Tok and is on the Taylor Highway, just west of the Canadian border.  There are two ways to drive into Alaska, and the Taylor Highway is the northern route.  Also called the top of the World Highway, the Taylor skirts the town of Chicken, a name given to this tiny community by the early miners who wanted to call their town “Ptarmigan”, but couldn’t spell it.  The Ptarmigan, a grouse, was a mainstay of their diets and they called them ‘chickens’, hence the name for the town.

Winter time population numbers are around 8 or 9 people.  In the summer, it blossoms to 15 or, so.  The extra people are all employees of the 3 or 4 summer time tourist traps that make up this seasonal town.

The summer-time tourist traffic through this first stop in Alaska, is staggering, hundreds and, sometimes, thousands a day.  I was the town cook working at the only café for 85 miles.  Beautiful downtown Chicken consists of one café, one bar and one gift shop, all which open only for the summer.

Packing for this job was more like packing for a vacation.  I had my gold pan, fishing gear, survival shotgun, and my guitar, all of which I used almost daily…except the shotgun, which I never shot just for fun.  It kicked like a fucking mule and I hated shooting it, but it made me feel safe.

The private cabin turned out to be a wall tent and the running water meant running to the river and getting it.  Of course, I didn’t need it in my tent, I didn’t have a sink.  It was comfortable and adequate, however, so after saying good-bye to the gang at the Yukon bar, Cliff and I took off for Chicken.

I didn’t actually have to be there until early May and there we were at the end of April, driving and talking excitedly, about the prospect of finding some color.  Cliff had been to Chicken before and knew the way there.

So, there we were cruising along the Taylor Highway, which was built on ground that is permafrost and we were probably doing 65, or so, when up ahead is a road sign on each side of the road.  The sign on our side of the highway was laying on the ground and of course all we could see of the other, was the back of it.

I had no sooner said to Cliff, “I wonder what that sign says?”, when we went into a dip in the road that was more like a six foot deep pothole that just swallowed our three quarter ton truck up and spit it out fifty feet later.

Both our heads slammed into the top of the truck, as we careened, just barely in control.  Looking in the rear view mirror, we saw the obvious.  The sign said, “dip”, well, actually, it said “pid”, through the mirror.

Looking back from the mirror, we were surprised to find, to our stark horror, we were in the middle of a couple hundred Caribou walking down the same two lane road which we were traveling on, somewhat out of control.

Cliff is a professional driver by trade and he sure earned his keep during the next few seconds.  After surviving two harrowing events, within fifteen seconds, we continued on for Chicken.

What a surprise we had when we arrived to find the rivers completely frozen.  Our plan had been to camp out and, boy howdy, was that a mistake.  We had been so excited about the trip itself, we had neglected to notice how close we were going to the Arctic Circle.  It was so cold, I couldn’t believe it.

As we pulled up to the three building town, my jaw dropped, it looked like an old movie set from the 1800’s.  Cliff stayed a couple of days then took off for home, leaving me in downtown Chicken.  Since I was there a week early, the only person there was Dick, Chicken Dick, as he was known.  Dick was the maintenance man and had been so for many years.  He was extremely glad to see me, as he had been there for some time without company.  He showed me to my cabin, which turned out to be a wall tent and was one of three.  Dick stayed in the one and the other was for another employee coming later.

Susan, the owner, was to be there in three or four days with her two boys.  Dick was quick to warn me about the boys and their antics.  I thought, ‘how bad could they possibly be? I mean, they’re just boys.’  I greatly under estimated his warning.   One on one, they were nice, but get them together and it was absolute bedlam.

The pay for this job was actually low, but I did make a lot of money, daily, from tips.  Room and board was included, plus I got to drink in the bar for free, the entire summer.  I’m not sure if that was a benefit, or not, but I took advantage of it, anyway.

Every night, the eight stool bar, was full, and I would play guitar, with travelers, or alone.  Finding a place to plan for gold was, at first, hard, as almost all areas were claimed, but I finally got permission to work an area of the river and I did really well with just a shovel and a pan.  I actually got color each and every pan, sometimes getting several hundred pieces in one load.

One of the employees, a young gal, named Liz, worked in the gift shop and had a real nice pick-up truck.  She was interested in learning to pan and soon became my gold buddy and would accompany me, almost every day.  We had a really good time.

Liz wasn’t old enough to drink and consequently, was the only one not hung over each morning.  Daily, we were visited by tour busses going from Dawson, Canada, to points south and west in Alaska.  Sometimes, we would have as many as seven buses, a day.  The people would pile out of the bus with camera’s in hand, and file into the café, bar, and gift shop, or head for the five hole outhouse.

I had extremely long hair and wore an Alaskan style bush hat.  I’m quite sure I was the most photographed person in the world, that summer.  People would take my picture hundreds of times a day.  It got to be very humorous, and I soon became somewhat of a local celebrity.  Of course, that notoriety only included about a dozen, or so, people.

After a twenty-year stint in the military that took him around the world three times, author Darrell Purdy decided to see if Alaska would live up to all the amazing things he had heard about it. That was back in 1998. Now—years later—he continues to be awed with each new assignment he takes.

In Keyless in Alaska, Purdy offers a travelogue, recipe book, and adventure story that follows him as he searches for jobs in the last frontier’s remote areas where half of the journey is just getting there. From the inside passage to the North Slope and areas West and South, he has cooked his way around the state. Purdy shares his travels and the jobs that got him there. He also includes some favorite “bush” recipes and stories both humorous and informative. Each day is guaranteed to hold a surprise or two and often involves bears or other wildlife that keeps him on his toes and keeps the camp dog busy.

Keyless in Alaska chronicles Purdy’s odyssey through the remote wilds of America’s true last frontier and the array of jobs he finds there.

Darrell Purdy grew up on a dairy farm in southern Missouri. He joined the U.S. Navy at age eighteen and traveled around the world three times. Now retired, after a twenty-year stint, he boarded the Alaska ferry in Washington and started a new adventure in Alaska.