The Bridge at Cromer’s Mill

My Days of Sunshine 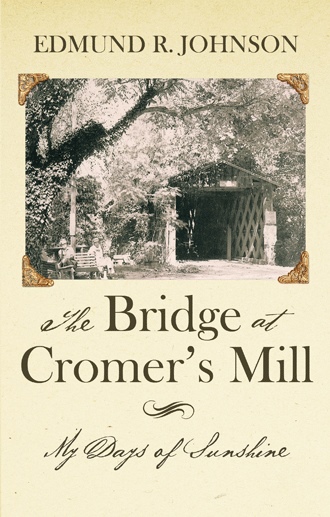 My time spent in Franklin County, Georgia, during the years of the mid-1940s through the mid-1950s were the golden years of my childhood. I refer to the very first memories of my life until the death of my grandfather as “the days of sunshine.” Those days brought so much enjoyment and excitement, as each day was like a new toy to play with, a new adventure to explore and a new taste to experience (like the wild plums of red and yellow, blackberries and dew berries, wild cherries, huckleberries, wild muscadine grapes and, of course, persimmons, each in its own season).

I grew up in a time and in a place with an extended family that was both protective and loving. However, they also allowed me the freedom and opportunity to explore and experience life as it was in both the old age (the time before electricity) and the new age (the time after electricity). This gave me a better insight and understanding of the life and experiences of my grandparents and their grandparents. It also provided me a better understanding of the times my father and mother and my uncles and aunts lived through.

As I think over those times and remember my family members who have passed on, I always see a smile on their faces. This gives me great comfort. I know we will all be together again with a smile for those who remember us.

My grandfather Daddy Ott’s great grandfather James was originally from Southwest Ireland near the city of Cork. In 1785, at the age of 16, he and his brother ran away from home to become stowaways on a ship loaded with bells bound for America. They hid in the barrels on board, which were used for food stores for the crew. The brothers are thought to have disembarked from the ship in Philadelphia or Baltimore in that same year.

Very little is known about James and his early years in America. It is known that he was befriended by an American colonel who fought in the Revolutionary Army. The colonel would later receive thousands of acres of former Cherokee land in Georgia for his service in the war. Sometime later, James made his way south along Indian trails from Maryland, via North Carolina, to Georgia. This is where he settled on an Indian land grant he acquired in a lottery. He was not far from his friend, the colonel.

James established his home and farm along a beautiful creek on the land grant. A family cemetery is still located on a hill overlooking the creek. James began buying and trading in Indian land grants in the early 1800s. He quickly built his reputation as a shrewd successful land speculator. James would go on to live a very long and productive life, raising a family of seven children of his own, as well as two additional children of Scottish and Cherokee heritage. The latter two were children of a Scotsman friend who had died.

Because James was a strong supporter of the Confederacy and all four of his sons fought in the Confederate Army, he was forced to sign a loyalty oath to the Union when the “War Between the States” ended. He was ninety-six years old.

In 1871, James was living with one of his sons in Morgan County, Georgia when he decided to walk back home to Franklin County to see his other grandchildren. It was on this trip, at the age of 101, that James died.

“The War Between the States” was a seminal point in our history. It defines Southerners then and even today. For we have a very stubborn independent nature that was not extinguished by the War.

In the 1860s and today, The South, including my Georgia, had a large segment of its population made up of the very independent-minded people of Irish and Scotch-Irish heritage. The phrase, “They got their dander up,” has meaning to us.

We were a very proud people that, after four years of heroic effort and struggle, were defeated in the War. Then, as with all civil wars, the victor writes the official history. In doing so, they seek to demonize the opposition and legitimize their reasons for the war and the actions the victorious army took during the war. Yet, the defeated side is denied this same right of having the opportunity to put forth their reasons for engagement in the war. Only individuals can seek to remedy the official history by writing their own interpretation of the war and the reasons behind it.

However, only the official history is taught in the schools. Even more disturbing are the politically correct history books of today.

My family was dramatically affected by the War. We lost a great grandfather and two great great grandfathers. In addition, many other relatives were casualties, causing great suffering to their families. The War destroyed the South financially, especially in the rural areas, for many years extending into the Twentieth century. The War affected and defined our lives and our futures for many generations afterwards…

My Grandfather, Otto, was a man of the Nineteenth Century. Born in 1883, in rural Franklin County, Georgia, Daddy Ott was the son of Asbury, a farmer and part-time math teacher at a local college. Daddy Ott was the grandson of Confederate soldiers and remembered their stories of the war and the battles they fought.

As a young man, my Grandfather loved to play the banjo at local gatherings. He also raised game roosters for chicken fighting tournaments. In the early 1900s, his brother, Irvin, tried to teach Daddy Ott to drive the family car across the pasture of Asbury’s farm. The car got out of control. Daddy Ott said, “Irvin, how do you stop this darn thing?” After that episode he never got behind the wheel of any vehicle ever again.

My Grandfather was a man of nature. He enjoyed farming, growing his fruit trees, working his bee hives, fishing, fox hunting, and working his garden and melon patches. Daddy Ott, I believe, felt more comfortable with the Nineteenth Century than he ever did with the Twentieth Century.

Daddy Ott loved life and nature. But, most of all, he loved Mama Addie, his children and grandchildren. He was a patriarch.

My Grandfather, Daddy Ott, and Grandmother, Mama Addie, were a wonderful and very influential part of my life in those early years of my childhood.

They owned a farm with woods, creeks, rolling pastures filled with lots of wildlife. It was a place where a young boy could find adventure from the time he awoke until the sun set on the day.

The time was mid-1940s through the mid-1950s in rural Northeast Georgia. Like the rest of the rural South, this area still suffered from the lingering effects of the War Between the States that occurred just seventy-five years earlier.

It was a time of great promise, optimism and excitement in my rural Georgia. Life became much easier then for everyone. But, there was a small lingering twinge of nostalgia for the time that had just slipped away from us...

Winter by the Fireplace

My first memories of my Grandfather, Daddy Ott, were around the fireplace in the wintertime. He kept a roaring fire in the main sitting area where he had his chair. During the afternoon, after the fire had died down some and there were plenty of hot coals, Daddy Ott would

When author Edmund R. Johnson was born on his grandparents’ farm in 1942, it was a unique time and place to witness the clashing of a passing age and the introduction of a new age. In The Bridge at Cromer’s Mill, Johnson shares a collection of stories set in rural Georgia in the 1940s and early 1950s.

Taking place in the time before electricity and on the cusp of the new age after electricity, he narrates stories about his early life when his grandparents shaped his world. With his mother away teaching and his father in the service in World War II, Johnson was allowed to roam and explore the woods, fields, and streams of the countryside, developing a sense of independence and self-reliance. His young life was pure Americana, a blending of the nineteenth and twentieth century. It was a time of sunny days and adventure, a time of bare feet and fishing trips, a time of exploration and fun.

The Bridge at Cromer’s Mill provides insight into rural Georgia, the people who lived in that time and place, and the experiences that molded their lives. It shares a story of a special bond between a grandson and his grandparents.

Edmund Johnson is a graduate of Georgia Southern with a bachelor’s in business administration. He is married and has two children and four grandchildren.

Edmund was born on his grandparents’ farm in 1942. This was a unique setting to witness the clashing of a passing age and a new one. Edmund’s mother was away teaching school, and his father was in the service at this time of World War II. Edmund’s first memories of life were of his beloved grandparents, from whom he learned to appreciate the wisdom of age and the beauty of nature.

On his deathbed, Edmund’s grandfather requested that Edmund be a writer or a preacher. This unfulfilled promise to his grandfather’s request weighed upon Edmund. Therefore, he penned The Bridge at Cromer’s Mill to fulfill that promise and to benefit his own grandchildren from his experiences. Through this collection of stories, Edmund hopes to pass on to his family the wonderful memories of his time with his grandparents and the love they shared.