The Memoirs of Socrates 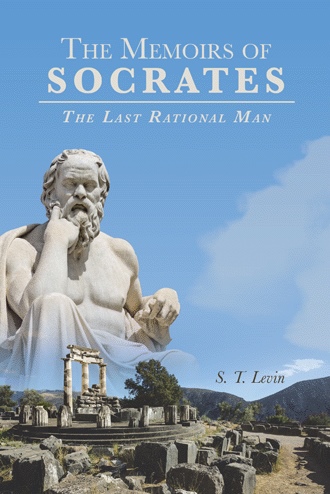 [Editor’s Note: these memoirs of Socrates were dictated to scribes over the course of twenty-five mornings during which Socrates (convicted of impiety) resided chained to a wall in the prison of Athens awaiting his execution. A complete explanation of its discovery and its translation can be found in the first addendum at the back of the book. A brief outline of the minimally known facts that constituted the previously “understood” version of the life of Socrates will be found in the second addendum which ends with a chronology of the major historical events of his world. The entire Socratic text now follows.]

So here I sit, in this windowless putrid-smelling dungeon carved into the Hill of the Muses west of the Acropolis. And among the many other ironies of my circumstance is this: I am inarguably the most famous living Athenian. Not counting a handful of military figures (such as the devil Lysander) I am arguably the most famous living citizen in all of Hellas. In all of Athenian history, only Alcibiades who died six years ago is more famous today than I am. To most of today's voting-age citizens, Pericles the Great has become a vague “character” from the distant past. Hardly anyone alive today speaks of him or even remembers his name. At least that's the way it seems if one reads the pamphlets and listens to the rumors about politics and socially prominent “celebrities,” past or present, the “social gossip story” stuff. For several years now there are more bullshit stories about Socrates than anyone else who ever existed—man, God, or Demigod.

During the last several months when my indictment for “impiety” became a matter of “public” discussion, I should have paid closer attention to the political organizations dedicated to the eradication of this so-called “dangerous educator” of Athenian youths. But even if I had, I would have done nothing different than that which I have always done. As I said to some of my friends weeks before my trial began: “It is as if I were a physician arraigned by a confectioner and tried before a jury of children. My only refuge, my only defense is the factual ‘evidence’ of the innocence with which I have so publicly lived my entire seventy-year life.”

I have an awful lot of lies about me to correct, and only twenty-four or twenty-five or maybe twenty-six days in which to do it. So let me begin with this point: to call me an “educator” is to get the rational subjective point-of-view (or “vision”) of everything backwards. It would be more accurate to call me an “anti-educator.” With the rarest of exceptions, Sophists, professional paid educators, lecture and most especially teach “rhetoric.” I never charge for my time in conversation. I never lecture anybody. I practice the “dialectic.” They speculate and theorize and manufacture fancy words with which to befuddle those less capable of utilizing if not quite “comprehending” such empty sophistry, such sophisticated bullshit. I take the opposite approach: I ask clarification questions along two basic lines of reasoning. I ask questions that enable me to better visualize what I am told about the objective world of nature including human nature, and I ask questions to clarify the precise meaning of the words the “educated” use to describe what they so foolishly believe is “newly discovered” as true about nature or morality.

When I was a boy almost all voting citizens were very skeptical about any “new ideas” being “publicly advocated” with fancy rhetoric used by young articulate “politically active” or “socially prominent” types.

Well, times have changed—and not for the better! People can be made to believe in anything—even irrational ideas about nature or how to advantageously change it, or even “protect” nature from human intervention, so long as it is dramatically and repetitively “discussed” with little, if any, contradiction. The more prestigious the speakers are the more powerful the message. The more educated the sincere believer in the latest theoretical “scientific knowledge” (which always turns out to be extremely generalized and uselessly imprecise if not out and out misleading foolishness) the more sincere the motivation of the believer to spread the word of their “newly discovered” beliefs to the “nonbelievers.” Nowadays, quite a few people can be made to sincerely believe anything crazy. And the more articulate the “true believer” advocate is, the more they find clever verbal ways with which to “justify” an irrational belief in the crazy ideas their dopey “followers” so sincerely believe in. Human nature is what human nature is. Sometimes it's pretty rational. Not often—but occasionally.

It’s a lot more “fun” going through life, minute-by-minute, with a palpable emotional awareness guiding your consciousness than it is applying reason and logic with the forcible application of “willpower.” After all, there are so many more ways to be “amused” today than there were way back when.

During the month between the conviction and the execution of the original teacher of wisdom (or philosopher) Socrates, these memoirs were dictated in the hope of correcting the “conventional wisdom” of history and the foolishness of Sophists as of 399 BCE with the knowledge and wisdom of the real man called Socrates.

The 24 centuries of human history that followed were irrevocably twisted by his one-time associate—the creatively dishonest dramatic genius Plato.

During the last 30 years of Socrates’ lifetime (and the first 30 of Plato’s), while the evermore “educated” (Big Government) Oligarchy thrived, the common citizen majority, the middle-class as they are now thought of, lost their property, their liberty and their lives.

From a generation before Socrates’ birth through the first 40 years of his real-world life, the common citizens of Athens rose from centuries of poverty and oppression to true liberty and the opportunity for personal wealth and glory in the greatest and freest political society of the then known western world. Athens and its Delian League in the 5th century BCE was the equivalent of, or better than, America in the 20th century—if one were a common citizen without inherited advantages (or other social “connections”).

What had preceded the decline in the formative 70 or more good years in Athens? And how did the generation-long decline occur?

Far more than the Peloponnesian War that Thucydides documented caused that decline.

Internal corruption proliferated as wealth and Sophisticated Higher Education for the affluent Oligarchy grew even before the Great War began. The socially prestigious Oligarchy re-acquired dominance and the common citizen majority were ground down into unthinking followers.

Socrates’ sarcastic memoirs reveal the tragic history of the internal decline of once-dominant Athenian culture, all told in a rational chronology of historical fact.

The author, born and living in New York City (for as long as Socrates lived in Athens) has watched his culture and country first rise to supreme greatness and then decline. For the last 40-50 years that cascading decline was inseparable from the coterminus rise of professions and professionalized higher education in influence and expense. As the years passed, this no longer seemed coincidental. For over 30 years, from endless but skeptically critical rereading of Plato and Xenophon and Herodotus and Thucydides, and the less complete study of more modern interpreters of same such as George Grote in the 19th century and Bertrand Russel, Karl Raymond Popper and Thomas Sowell in the 20th, certain patterns of thought and culture were revealed. This book is a product of an non-credentialed amateur's quest for the truth of “why” and “how” this American decline pattern is a repetition of happened more than 24 centuries ago in the freest and wealthiest society the western world had ever known – up until then.