No Adventure Too Ridiculous

Mad Tales from a Lifetime of Travel 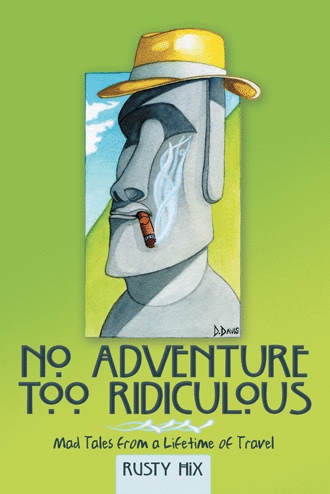 “Floor it and don’t back off until we get to the top!” yelled the dune buggy guide sitting in the seat next to me. I responded by stomping the accelerator to the floor. In front of us loomed a 200-foot-high sand dune.
We were in the southern coastal desert of Peru near the town of Paracas. Dale Patterson and I had spent the last couple of days exploring Lima and had driven south to visit the famous rock islands of Islas Ballestas and the Paracas National Reserve, which is considered by many to be the Galapagos of Peru. While I was looking forward to seeing all of the native wildlife in the area, seals and birds were far from my mind as we sped toward the base of the sand dune.
As the moment of launch got closer, Dale shouted encouragement from the back. Well, if you consider “Don’t miss a gear, dumbass!” encouragement.
A few seconds later the view changed from white sand to blue sky as we rocketed up the top of the dune. I had watched the driver do this maneuver several times before I climbed into the driver seat and was confident I could pull it off without killing us.
My adrenaline was in full swing as we closed in on the crest of the dune. I backed off the accelerator as the vehicle hit the top and then, as directed, hit the gas again. I knew what was coming, but it was a whole different feeling now, because I was in control of the final outcome. In a split second we were at the top of the dune and I could feel the front wheels lose contact with the sand. The front of the buggy became airborne and then we were headed 200-feet straight down. The rush factor was out of this world! As we sped down the side of the dune, I could feel the back end of the buggy starting to kick around on me. Out of the corner of my eye, I could see the guide reaching for the steering wheel in case I lost control. If the back end swung around much farther, we would start rolling. Briefly, I thought about how much it would suck to roll 150-feet down a sand dune in the middle of the desert, not to mention that I would never hear the end of it from Dale. Fortunately, I was able to maintain control, and we continued straight down to the desert floor and across to the next dune. This was the ultimate theme park.
We were on a week-and-a-half adventure trip to Peru. We spent the rest of the day exploring the mammoth national reserve with its vast open landscapes and towering cliffs that overlook the Pacific Ocean.
The following day found us in a small boat on our way to Islas Ballestas. On the way, we passed the incredible El Candelabro de Paracas, aka the Candelabra of the Andes. This geoglyph is nearly 600-foot-high and carved 2 feet deep into the soil of the northern face of the Paracas Peninsula at Pisco Bay. This would be the first of many similar drawings we would see near the city of Nazca, Peru.
Some say that Islas Ballestas has the largest bird colony in the world. One thing that was clear as our boat approached the first of the rock islands was that it was also home to the largest collection of bird shit in the world. The smell was overpowering. You wouldn’t want to be out in here in a rough swell with a hangover lest you end up chucking ceviche and pisco sours.

Islas Ballestas
A cacophony of sounds reverberated through the air as chattering seals, cormorants, pelicans, and Humboldt penguins went about their business. While this outing didn’t compare to the previous day’s excitement, Islas Ballestas remains a unique area well worth a visit.
Following our boat tour, we ate lunch at one of the many family-owned restaurants that face the beach in Paracas. These small restaurants were the best source for local seafood dishes such as ceviche and shrimp and rice. Not far from Paracas is the town of Pisco, which was 85 percent destroyed in an 8.0 magnitude earthquake only two years earlier and killed several hundred people when the local cathedral collapsed during mass. The nearby town of Ica was also heavily hit. Adventure travel does not discriminate against emotions. This town that had been made famous because of its locally produced brandy of the same name was still a wreck. Poverty is rampant in this part of the world and rebuilding efforts had been minimal. To say it was depressing would be an understatement.
The next morning we were back on the road driving through the desert on our way to the city of Nazca to see a sight that had long been on my “must-see list.” I first read about the Nazca lines during college in a book called Chariots of the Gods? Unsolved Mysteries of the Past, by Erich von Däniken. This book proposed that early man was influenced by visitors from another planet. The author refers to a number of historical sites and artifacts to make his point, including the moai of Easter Island, Stonehenge, and an early Egyptian battery, but foremost among them were the desert drawings or geoglyphs of Nazca.
Hundreds of these drawings are spread across the Nazca desert and they have mystified scientists for years. Many of them are over 600 feet wide and they feature a range of styles. Some are simple line drawings, many others are complex figures of animals. The most famous are figures known as the Monkey, the Hummingbird, and the Astronaut. So what about the Nazca lines suggests the presence of alien visitors? The answer is that they can only be seen from the sky, so therefore the theory is that the Nazca people were instructed to draw these huge figures by people arriving in a spaceship.
I have always been intrigued by the world’s mysteries. Having been fortunate enough to visit Stonehenge as teenager, I was now out to see one of the more remote and fascinating World Heritage Sites on the planet. The mystery of these lines included not only “Why?” but also “How?” Beginning in the 1940s a German mathematician and archaeologist by the name of Maria Reiche dedicated a good part of her life trying to answer these questions. The house she was based out of north of Nazca is now a museum, so it was only appropriate that we should pay a visit there to learn about what we were seeing. A tour of the museum offers visitors great insight into the commitment demonstrated by Maria Reiche. Over the years she was able to show with much certainty how the Nazca people were able to draw the lines without having a full bird’s-eye view of what they were doing, but neither she nor anyone else has fully proven why they were drawn. Reiche’s greatest accomplishment in the end was bringing the lines to the world’s attention and helping get them protected by working with the government of Peru and bringing them to the attention of the rest of the world.
The airport was on the outskirts of town. As we pulled into the parking lot it was obvious that it was a slow day for tourist flights. The airport offered several options for seeing the lines and it didn’t take us long to find a pilot whom we felt could give us a decent tour his plane falling apart.
A few minutes later, all three of us were buckled in with headsets on so that we could communicate over the noise of the engines. As we started flying over the lines, I mentioned to the pilot that many of the lines looked like they were runway patterns for some type of aircraft. He replied, “I’m glad you picked up on that; not everyone does.”
Over the next thirty minutes the pilot banked the plane from side to side so that better see the drawings. I was most fascinated by the Astronaut which was on the side of a huge hill and was a monstrous drawing of a strange-looking person with what appeared to be a huge head or a helmet, with one arm up as if he was waving. Why would anyone feel compelled to make put out this kind of effort in the middle of a hot desert? What was going on back then?

Rusty Hix first developed a love of travel and adventure when he accompanied his family across the United States as a young boy. As he matured into a young man, Rusty began traveling internationally to feed his curiosity for understanding the world’s greatest mysteries. From hiking in national parks to caving in foreign countries, Hix’s fascinating stories detail unforgettable adventures in Cancun, Costa Rica, Australia, New Zealand, China, Easter Island, Finland, and many other locations.

In sometimes irreverent prose, Hix chronicles his not-so-typical travel tales of helicoptering over the geothermal areas of New Zealand; zip-lining, kayaking, and whitewater rafting in Costa Rica; and visiting pagodas, Buddhist temples, and the Great Wall in China. He also describes many of the wild experiences that include a panda sitting on his lap, vertical caving, sky diving, climbing the world’s highest structure, and a serious car accident that nearly cost him his life. Hix also details the food, customs and behavior of people within a variety of cultures along with vivid descriptions of the scenery where it all takes place.

No Adventure Too Ridiculous is a colorful celebration of one man’s escapades as he explores far-flung places on a legendary and sometimes farcical journey around the world.

Rusty Hix has been involved in international sales for the last seventeen years. His travels have included many back road adventures in the United States as well as journeys to over thirty countries for both business and pleasure. Rusty currently resides in Tampa, Florida. No Adventure Too Ridiculous is his first book.