Secrets in the Open

The Undisclosed Life of a Bipolar Man 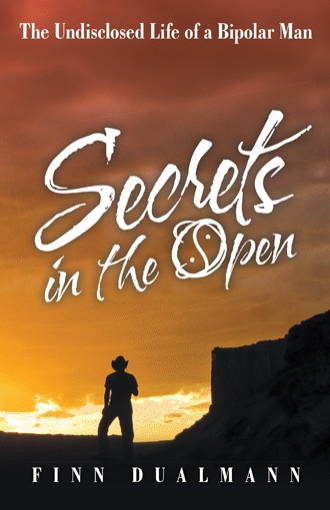 All through my life my mom has always told me not to be so sensitive, don’t let things get to you like that.

Here’s where I believe that my awareness of my sensitivity began.

I remember when I was about five or six and we were living in Germany. Dad was in the Army and we moved around a lot. This time we were in Boeblingen. We lived in a military housing area next to Kelly Barracks where the soldiers lived. The housing area was for married soldiers with families and who worked at Panzer Kaserne. Panzer (German for tank) Kaserne was where the German tanks of WWII were based. It was a beautiful place surrounded by forests.

There was a little boy maybe a year younger than me, and he had a slight speech impediment. He was struggling with the word “hospital”. He would always say “hostipil”. All the other kids just laughed and made fun of him, but I thought I could help him. I sensed his vulnerability and his desire to get better at speech; you could see it in his eyes. So I worked with him for a little while. We stood out among the trees and we would say hospital over and over and over. Starting with Hos-pit-al, hos-pit-al, hos-pit-al, finally putting it all together he said ‘hospital.” We said it over and over, faster and faster and he had it, until I slipped the word “hostipil” back in and of course it messed him all up again.

Several things hit me at that moment, and it must have made an impact on me, if I still remember it to this day. First of all, I’m sorry little guy, I didn’t mean to mess you up. What I learned that day though, was just how powerful my words and my influence on someone else can be and how easily I can hurt them if I’m not careful. I felt such pride in helping that kid and I could feel the pride he felt in himself that day as he mastered the word. Then I felt the shame that overcame me as I messed him up again. And I felt the disappointment he felt in himself as the word tripped him up again. You can’t use people for your own amusement. Someone will get hurt.

Such a small story but such big lessons. Do all five and six year olds learn things like that with such intensity that they remember it all their lives? It bothered me for days until I saw that he did eventually get the word right, but those feelings have been with me ever since. The point of the story is that my feelings towards this situation were so strong that I have never forgotten my lesson, or that little boy. I try now to be more empathetic with others as they have feelings too, maybe not as strong as mine, but just as fragile.

I wasn’t a troubled child, and I didn’t do things that were outrageous, but I did run away from home when I was in Kindergarten. Well, I didn’t really run away, I just left. We had gotten a new sitter and I didn’t like her. So I left, it made sense to me. I was going to go see my dad at his office. I knew where he worked and started walking. I never made it to his office. My parents eventually found me at the military police station, watching TV. We got a new sitter.

I hid under the teacher’s desk once, after placing a wind up mouse in her center drawer. When she opened the drawer and shrieked, I crawled out of my hiding place. She didn’t think it was funny, I did.

My mom told me that she never needed to tell me to clean my room. My things were always neatly put away. Apparently, I couldn’t stand it if things were messy. She said I used to clean my sisters room too; Shirley used to make such a mess playing with her dolls and things, and never picked up after herself, so I would. Everything had to be in its rightful place before I could go to sleep.

Sometime in that same timeframe, I was playing alone under the clotheslines. We lived in a four story apartment building and the clotheslines were off to the side of the building. There was a fine red gravel that filled in the area, much like the sand in a baseball field. Anyways, while I was playing with my Matchbox cars in the gravel, another little boy picked up a handful of the gravel in each hand and yelled my name. As I turned around he threw a handful of that fine red gravel in my eyes. My parents took me to the doctor and I wore bandages on my eyes for a week. I’m told they weren’t sure if I would see again; thankfully I did. I’m nearsighted now but glasses fix that.

I don’t recall ever being angry at the kid, but I do remember thinking, “Why did he do that”, and how does he feel about what he’d done? I barely knew him and had never done anything bad to him. I wonder, does he still remember? I think I felt sorrier for him than anything. What could possess a person, even a kid, to do such a thing? I think that ever since then, I have always tried to see things from another person’s point of view; to understand what motivates them to do the things they do. Especially when what they do is so destructive or inconsiderate of others. Don’t other people feel compassion towards each other the way I feel it? I guess not.

I can’t tell you the number of times that I’ve felt compassion for someone as I’ve observed their situation, but had no means with which to help them. For some reason, I am able to feel what they feel and understand their struggle, and it has often made me sad; which for me is a tough situation because remember, I don’t just get sad, I get very, very sad, very, very fast. Psychiatrists have told me that my sadness is actually depression, I believe them. If you’re with me and we see something very sad, especially if it involves harm to innocent animals, don’t be surprised if all of a sudden I get very quiet and begin to cry. Why? Because my heart is aching and I feel their pain. Don’t’ be so sensitive? How can I not be?

Something was wrong. Author Finn Dualmann could feel it. Ever since childhood, he was different from others, but he had no idea why. His moods quickly swung from happy to sad, from compassionate to aggressive, alienating people along the way. He spent most of his time alone, with only his sometimes outlandish and never-ending thoughts to keep him company.

In Dualmann’s mid-fifties, he was diagnosed with Bipolar II Disorder with rapid cycling. By then, everything near and dear to him was gone. In Secrets in the Open, he shares stories of his life and reflects on how his bipolar disorder has changed and affected his interactions with the world. He recalls his childhood, his teenage years, and each decade of his adulthood, including tales of his military career and later work, his family and eventual divorce, and his struggle with various addictions.

A collection of hypomanic episodes that make up the story of Dualmann’s life as he recalls it, Secrets in the Open narrates what it’s been like for him as a bipolar man and how it has affected his relationships and the experiences he’s had along the way.

Finn Dualmann was born in Germany in December of 1955 was and raised in a military environment throughout Germany and parts of the United States. Finn currently lives in Long Praire, Minnesota.