The Rise and Decline of the American Empire 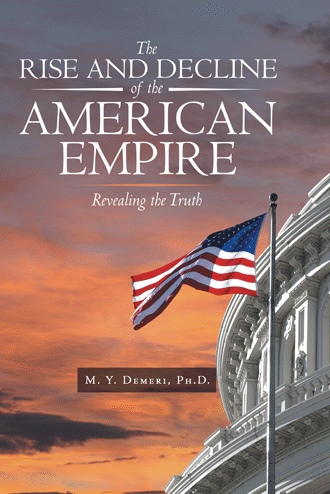 This book examines where America came from and where it is going. It follows the transformation of America from colonial to imperial and finally to a world superpower. The book reviews major milestones on the road to the establishment, growth, rise and decline of the American Empire. Some of the major events spanning American history include: Establishment of Colonial America, the Declaration of Independence, the Civil War, the Great Depression, World War I, the Pearl Harbor Attack, World War II, The Korean and Vietnam Wars, The Cold War, the 911 Terrorist Attack, the Afghanistan and Iraq Wars, and the Global Financial Crises.

America’s growth and expansion was incredibly large and amazingly fast. In seventy years (1783 to 1853), the territory of the United States extended from the western shores of the Atlantic Ocean to the eastern shores of the Pacific Ocean. The extent and speed by which America grew and prospered has led some Americans to believe that their success was blessed and preordained by providence. In his book “Seizing Destiny”, Richard Kluger believed that America’s growth and progress was due to the fact that “its supercharged people overlooked no opportunity to maximize every advantage that nature, geography, history, economics, and, yes, dumb luck presented to them”123. Americans manifested their destiny by seizing other people’s land and “gained a continental expanse by means of daring, cunning, bullying, bluff and bluster, treachery, robbery, quick talk, double talk, noble principles, stubborn resolve, low-down expediency, cash on the barrelhead, and spilled blood when deemed necessary”123.

America dug itself into a deep hole by its irresponsible and limitless spending. Budget deficit and the national debt remain the central problems plaguing America. Saving the American Empire entails the adoption of serious measures to balance the budget and curtail spending. It also requires the fair distribution of wealth, eliminating government dysfunction, and the upholding of the principles of freedom, justice and democracy.

After World War II, America realized the benefits of controlling other countries informally and indirectly; hence, adopted imperialism instead of colonialism to achieve its objectives. America’s “exceptionalism” is used as a pretext for foreign intervention and hegemony.  America must be strong, but it must differentiate between “wars of choice” and “wars of necessity”. America must be powerful, but it does not need to be stronger than the next 10 major military powers combined.

Some analysts are still optimistic about America’s future and believe that it will continue to be the most powerful nation, but that its relative power will be diminished. In his book “The Post American World”, Fareed Zakaria believes that the issue is not the decline of America, but rather the rise of emerging countries like China and India. Although he defended America from indicators that suggest its decline, he warns about the weakening effect of factors such as internal partisan politics, domestic ideological groups, special interest power, and the effect of media on the federal government ability to cope with global realities 114.

In another book, “The Myth of America’s Decline”, Josef Joffee believes that America will continue to be the lone superpower for a long time. His beliefs were based on what he called key indicators of America’s strength and success. He listed two major factors and four drivers of future American superiority to support his claim. Those were great possession of assets, deployment of the most powerful navy, outstanding higher education, elevated R&D spending, a large share of issued patents, and a liberal immigration policy 115. This is all fine, but when one realizes that all of that was accomplished, not on the basis of real wealth and earned income, but on the basis of borrowed money and spiraling national debt approaching $18 trillion. This level of national debt constitutes a serious and unprecedented situation for the United States.

This book questions the survivability of America as the lone superpower. It claims that careful analysis point to America’s decline as an established superpower and the rise of China as a competing power. Some analysts believe that the evolving relationship between the United States and China will have a profound effect on international relations in the 21st century. In this book, America’s decline is based on the cumulative assessment of 22 economic, social and political indicators. The greatness of America is questioned when one realizes that its government and Congress failed to create or enact legislation and laws needed to achieve progress and efficiency in many crucial areas such as, controlling spending, reducing national debt, repealing tax expenditures, improving infrastructure, enhancing secondary education, curtailing college tuition inflation, protecting the environment, reclaiming manufacturing, cutting military spending, regulating lobbying, addressing wealth distribution, upholding equality, passing immigration reforms, securing U.S. borders, safeguarding democracy, ending political discourse, achieving social progress, and ceasing imperialist ambitions.

This book does not reflect conservative or liberal views. It opens a national dialogue on America’s policy, economy and culture. It explores the causes, and offers remedies for America’s decline. The book is divided into eight chapters and follows a textbook style and organization. It is also educational and well documented in the sense that it explains and defines the 22 indicators, measures, and indices used to assess America’s performance. Over 200 charts and tables were embedded throughout the book to make it enjoyable to read and easier to understand the reasons behind America’s impending decline as a world superpower.

The United States rose from a modest colonial power to a formidable world superpower, but then it went into decline.

M. Y. Demeri traces the major events that allowed a loosely held league of thirteen British colonies to become a union of fifty states spanning the North American continent as well as Alaska and Hawaii. The nation would revolutionize world arts, science, technology, space exploration, and lead the digital revolution—all while promoting the ideals of democracy, freedom, and liberty.

But it also contributed to global conflicts, a nuclear arms race, political upheavals, and the financial collapse of world markets. To this day, it has failed to live up to its promise of turning economic success and prosperity into social progress.

With more than two hundred charts and tables, this book examines where America has been, what led to its decline, and how a rising deficit, soaring health care and Social Security costs, national security concerns, and miscarriages of social justice pushed it into decline. More importantly, however, it offers solutions to reverse course before we witness the end of The Rise and Decline of the American Empire.

M. Y. Demeri, Ph.D., holds a doctorate in metallurgical engineering. He held positions at Ford Scientific Research Labs, served as chairman and council member for various scientific committees, and taught in academic institutions. He has authored more than a hundred technical papers and four scientific books.