Book 2: The Other Side 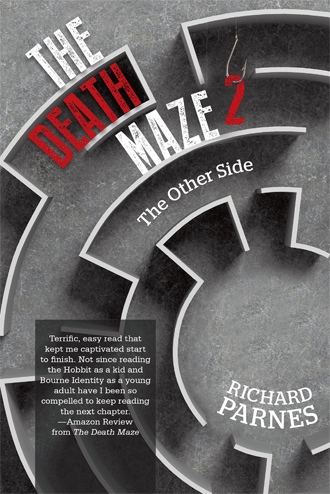 The gel-like haze hung throughout the atmosphere. Looking up towards what appeared to be a sky, the haze moved slowly and deliberately. There was no rush for this haze, for lack of a better word, to move beyond the area it already was. There was no reason for life, if there was any, to inhabit the realm of this possibility. As air or fog is to our world, this just was.
There were no particles of pollution within the haze. It could cause no destruction since it did not contain any materials that would harm breathing or detract from the breathing process. It just hung above. Life could be only because this world would be.
What was below this haze was a void. If a small metallic ball were to be dropped from an unknown level between the gel-like haze and the void, the ball would actually fall and eventually level off to be suspended in midair. What caused the suspension was the weight of the void minus the weight of the position of the ball. It would just stay suspended for reasons that this unknown world did not need a level ground for a foot to be planted or a haze to move beyond its current location.
It just was.
What on Earth would be considered a three story building would actually be at the level below the position of the so-called ball. What was inside the building was simply nothing and everything according to the Elder minds. The building and its façade of a structure was merely for show. It was used as a reality check for what needed to be inside; for serenity, security, safety and a means to sustain life.
It was also an answer to bring life back to reality or its origin. It was there for a reason and nothing and no one ever questioned why. No one ever had to question because prior to no more than one hundred years ago, in the early 1900’s, no one ever had to be in this building. It was built by the Elder minds for the purpose of assisting, and hopefully, righting a wrong that had been committed. As of this date and time, only two had entered while three had been in the sixth dimension. One did not escape Apep’s evil. The last two did.
In all, the haze was just an anomaly traveling around in a circle. It never dissipated and kept its aura. It could change in thickness at will and only provided documentation that the representation of an atmosphere was relevant.
IT JUST WAS!
The sky above was also a picture perfect facsimile of a world that could once be. Look beyond the sky and there were star-like and planet-like remnants all for reasons of the show. There was even an intermittent shooting star making the overall picture appear more real.
The only question was… why?
Why indeed!
The only answer for this world was…why not?

Dr. Dan Adams is grateful he has mastered the sixth dimension and is no longer controlled by Apep. Now free to explore and understand without mortal consequences, the scientist uses his meditative powers to return to his inner-self, knowing there is work left to be finished. Along the way, those he meets and works with are just as stunning as the parallel world he must navigate.

Apep is angry, destructive, and more determined than ever to seek revenge for the loss of Dr. Adams, the one he wanted to enslave for all eternity. But what his monstrous form does not realize is that his soul is on the verge of no longer being. As Apep tries to manipulate the sixth dimension to reveal its open portal, he hopes to find his way into the three dimensional world and force the humans to worship him. Meanwhile as UCLA scientist Allyson Rayburn works to finish Dr. Adam’s AGE project, she and several others embark on a mission to first find the portal to the sixth dimension and then determine how to control it--without becoming the next victims. Unfortunately what they believe is possible is rapidly becoming an irrepressible force.

In this continuing tale, a scientist must rely on help from his colleagues as he searches for spiritual oneness and understanding and attempts to defeat the evil within the sixth dimension.

Richard Parnes has nurtured a passion and love for the creative word for over fifty years. He and his wife, Mila, currently reside in Southern California, where he is active in his church and grateful that God is the center of his life. This is his second book.