The Dragon, the Captain, the Mermaid, and Me 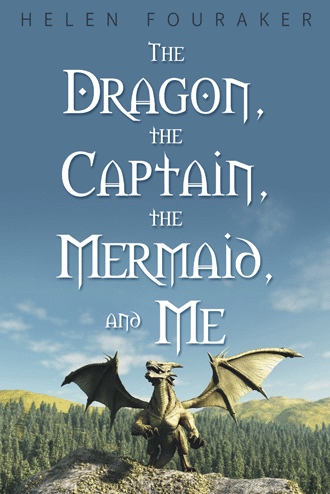 The sun rose early over Iremere’s green valleys and white cliffs, illuminating the haze with a soft yellow glow. The morning sunlight entered the Ryan cottage, landing softly on the rough-hewn table. Ian, a lad of about 12, was having breakfast with his parents, Grace and George, and his younger sister, Siobahn (who was about four). The baby, Brooklynne, was napping peacefully in her cradle.

The cottage was a simple affair. It was made of logs with small windows covered with plain curtains. There was a large fireplace for cooking, a wooden table with four chairs, and three beds for sleeping, two of which were in a loft above the kitchen. There was a small cupboard for dishes and pans. On one cupboard sat a pan for washing dishes. Hooks made from deer antlers hung on the walls, which the family used to hang their clothes and various other items.

Grace, the children’s mother, rose from the table and fetched the small saucer of milk which had been placed on the windowsill the night before.

“Mama,” questioned Siobahn, “Why do you put milk on the windowsill every night. Sometimes, I want to get up in the middle of the night and drink it myself.”

“Oh,” Grace replied,” “It would not be good for you to do that. This milk is for the little people. One must always put out milk for them to drink at night. If this isn’t done, they will creep into the house while we are sleeping and steal away Brooklynne. They will leave an ugly troll baby in her place. You wouldn’t want that would you?”

“No,” Siobahn said, her voice quaking, “I love my little sister.”

“We didn’t do it one night,” quipped Ian, “and look what happened.”

“We got you.” and Ian let out a laugh that sounded like a donkey braying.

“Ian, that’s enough.” said George, the children’s father. “I want you to take the ox to the west field today and begin plowing the field for the winter wheat.”

Siobahn was very excited because the apple trees were ripe with fruit and she loved apples. “Can I go, too?” she asked.

Ian climbed the loft to remove his bed clothes and put on his work clothes. He tied his pants with a red rope, which his mother had said would keep the little people from playing tricks on him. All of the children’s clothing had red ribbons attached. Shiobahn’s and Brooklynne’s dresses had red ties, each and every one. Grace often worried about her children as she knew there were little people all around the countryside.

Ian grumbled to himself as he trudged to the barn. It wasn’t much of a barn, not nearly as nice as the Kanaly’s had at the next farm over, with its bright red paint and hand-forged hinges and latches. The Ryan’s barn leaned precariously (which means dangerously) to one side. It had been painted once, long ago, but wind and rain, snow and ice had obliterated any color, so that it was now a dull gray. If George hadn’t built a lean-to on the north side, it probably would have fallen over long ago.

Ian, his dark, lank hair hanging in his face, one shock covering his left eye completely, was in a sour mood. He always had a pout on his face, and he looked like he wanted to kick something. Now he had to harvest the wheat, while his little sister stayed home and was babied by his mother.

Ian approached Ralphie, the oversized ox cautiously. Ralphie was strong and could pull the plow all day without a break, but he could have a mean temper. Ian carefully put the large wooden yoke on Ralphie. Ralphie tried to knock Ian over with his head. When that didn’t work, he tried to swat Ian with his tail. Ralphie was always swishing his tail around, trying to get rid of the gnats and flies that flew throughout the barn.

“Don’t have a cow.” Ian snickered.

A small voice behind him admonished him in a motherly voice. “Ralphie isn’t a cow. He’s an ox.” said Siobahn.

“I know that,” Ralphie replied. “Anyway, you’re not supposed to be in here. “ Then added in a sing-song mocking voice, “You’re too little.” “Why don’t you go do some girl stuff, like make me some lunch to take with me?”

“Make your own lunch,” Siobahn retorted. She stormed off angrily muttering under her breath about how unfair life was. It wasn’t her fault she was little. And maybe Ian was right. Maybe she was really a troll, maybe that’s why she was so little. She picked up the hem of her flowered dress and looked at her feet. They didn’t look like troll feet, her small shoes fit perfectly over her toes. She imagined trolls would have hooves like Ralphie and if that was the case, the shoes wouldn’t fit her. She wandered to the edge of the field, and filled her apron with wildflowers to take home to her mother.

Siobahn then wandered over to the apple orchard next to the field where Ian was supposed to be plowing. She neatly placed the bouquet of flowers on the ground and shook out her apron. She stood on a large rock beneath the tree, grabbed a branch, and pulled herself up. She carefully climbed the upper branches of the tree as that’s where the juiciest apples grew. Shiobahn filled the pockets of her pantaloons (which are like jeans, but looser) with apples to take home to her mother and father. “But not for Ian,” she thought to herself.

She then picked an apple for herself, biting into it and savoring the sweet white flesh. Not only were the best apples at the top of the tree, but Ian couldn’t see her there. She was able to watch Ralphie try and pull Ian off his feet as they plowed the field. With any luck, Siobahn thought, I will get to see Ian fall flat on his face (it had happened before).

Ian led Ralphie to the field by putting a lead rope through the ring in Ralphie’s nose. It was an effective way to lead the ox, but it was painful to Ralphie. Maybe that’s why he was so mean (Ralphie, not Ian, but Ian wasn’t any winner in the personality department either, thought Siobahn.

Ralphie threaded the leather straps attached to the yoke to the small plow. He sunk the plow into the earth and ordered Ralphie not to move. Ian went to the apple tree and began pulling on the branches and watching them snap back. Siobahn waited nervously to see if Ian would look up and see her spying on him. Unsatisfied with the branches of the apple tree, Ian went to a willow by the small stream that separated the Kanaly farm from the Ryan’s. There he found a sapling that he cut down with the knife he wore on his belt. Snapping the young tree with his wrist, Ian grinned and stated “That’ll get the old cow moving.”

Siobahn bit her tongue and thought, “He’s not a cow, he’s an ox.” She then watched Ian snap his willow at Ralphie and they both moved slowly down the field, plowing under the stalks of the old wheat and exposing the newly tilled soil, Ralphie’s tail switching at the gnats and flies that had followed them from the barn. Birds began following behind them, hopping about over the dirt, pecking at the bugs and worms exposed in the wake of the plow. Ian swung the willow at the birds and angrily shouted, “I’m not here to provide you with a free meal. Go bother someone else.” After only two passes through the field, both boy and oxen were perspiring profusely (profusely means “a great deal” or to some “a lot”).

Siobahn could understand why Ralphie had a froth of white sweat pouring from him, but to her it appeared that all Ian was doing was walking and hitting poor Ralphie with the switch.

“It’s no wonder he’s so mean spirited, with Ian hitting him all the time.” She thought to herself. She then giggled as she pictured the situation reversed, with Ian being hitched to the yoke and plow and Ralphie following behind on his hind legs, whipping Ian repeatedly with the switch. “That wo

In an enchanted land, twelve-year-old Ian Ryan and his sister, Shiobahn, live with their family. One day after the sun rises over Iremere, Ian sets out to find a fire-breathing dragon rumored to live in the nearby cliffs. Despite Ian’s unwillingness to bring her along, little Shiobahn secretly follows him on his journey. Shortly after the children arrive at the cliffs, they encounter the dragon and are carried off to his cave.

AnKeCh explains he is a prince who has been transformed into a dragon by witches, does not know how to break the curse, and wants to find his childhood friend, Ainsley, and marry her. But what he does not know is that Ainsley, who believes her prince is dead, has fallen in love with a sea captain. After Ian is dropped at home during a dangerous ride with the dragon, AnKeCh takes Shiobahn back to his cave where he promises not to eat her. But when fairies make an appearance and share a secret, everything changes as Shiobahn decides to do whatever it takes to restore the prince’s happiness.

In this adventurous tale, a little girl must rely on help from her new magical friends to help a prince reverse a curse and reunite with his long lost love.

Helen Fouraker grew up in a small town in southeastern Nebraska, called Salem. She was raised in a family of nine children and fondly remembers her mother gathering the five youngest siblings onto her bed after lunch. There she would spend time reading to her children, quieting them all down for nap time. Helen believes that this was one of the greatest memories she has of growing up.

She went to a small state college, later receiving a Master’s Degree in Education from Creighton University. She taught elementary and middle school for almost thirty years.

After her retirement, she chose to spend her time volunteering, extending her hours with the American Red Cross, the Medical Reserve Corps, and Sarpy County Habitat for Humanity.

This is her first attempt at writing a full length book. The idea for this book had its genesis in the mid-eighties, but her boyfriend at the time discouraged her from attempting to write, stating that no one would read anything she wrote. The rough idea from the manuscript was packed away but was never forgotten. After retiring, it was her New Year’s resolution of 2015 to write her book. She hopes you enjoy reading it.