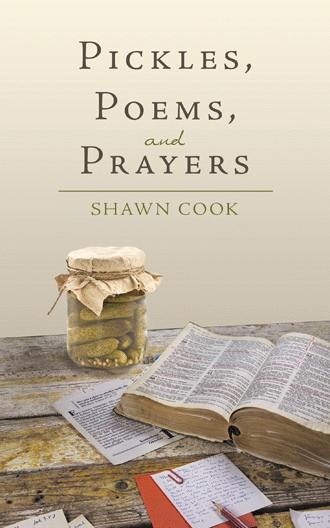 Many thoughts run through my head,
But few of them are ever said.
No one knows how I feel,
I hide behind a wall unreal.
No one wants to tear it down,
They are afraid of what might be found.
Maybe a kind and decent man,
Or is he angry with evil plans?
Heaven sent yet I await,
A trip though hells lonely gates.


Contour waves,
And complex lines.
A link between,
Your world and mine.
Ever changing patterns,
Drawing me in.
You know where I started,
And where I have been.
Your light it caresses me,
Your wind it does too.
With every captivating moment,
My thoughts are of you

… I remember when you
Were my only friend,
The thought, the feeling
That all was lost
Until I knelt down,
And touched that cross ...


At one time in his life, Shawn Cook became angry with God, lost all hope, and subsequently embarked on a journey of self-destruction that led him down paths he never could have imagined. With the intent of illustrating to others that there is always hope, no matter how dire the circumstances, Cook shares his first compilation of poetry that offers a glimpse into his twenty-plus-year quest for peace, acceptance, and love.

Cook’s verse touches on many issues that highlight his internal struggles as he attempted to find happiness and fill the void within him. Through honest, sometimes heartbreaking reflections, Cook divulges how, when he was lost, broken, and at his wit’s end, he finally found his completeness in Jesus Christ.

Pickles, Poems, and Prayers shares one man’s poetic journey of self-discovery as he climbs out of the darkness of despair to embrace hope, faith, love, and a new beginning.

Shawn Cook was always in search of something to complete him, until age forty when he finally found peace through his relationship with Jesus Christ. He grew up near Cedar Lake in rural Indiana, just a stone’s throw from the Michigan state line. Shawn currently lives in the country outside of Albion, Indiana.