The Girl with the Chicken-House Pony 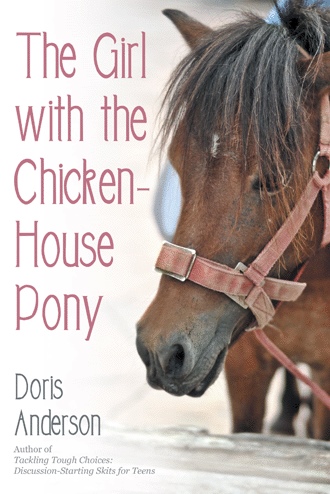 It was some years ago, before people really spoke of such things. You took whatever life threw at you, and if you had a dark secret, you didn’t tell anyone. Even your parents. The shame and embarrassment would’ve been too great. You didn’t go on TV and blab it to millions of people, making charges and trying to free yourself of the darkness by doing so. You didn’t come across magazine articles everywhere with stories like yours, so you didn’t know how common it was. You dealt with it alone the best you could. And if it took a pony, who’d gone through her own hell, to help you make your journey, then that’s the company you had.

Chapter One
Precious really was her name. Whoever named her must’ve seen her right after she was born--tiny brown and white Welsh pony, hooves the size of walnuts, white star on her forehead. She was so small that any grownup could’ve picked her up and carried her around like a dog, yet she was all horse. Soon she could jump around, dash back and forth, and buck for the joy of it.
But like so many farm animals, her first owner kept her for just a little while. When she could survive without her mother, she was sold. Who knows how many times? Her only possessions were a frayed pink halter and a short lead rope. Finally, after six years, she ended up living all by herself in an old chicken house full of spider webs and a rusty cultivator.
Once in a while, Old Grandpa, in his grimy overalls, came out of a clapboard cottage and fed her a can of grain. He’d won Precious in a poker game. He figured maybe his grandson would like her, but the boy didn’t want a pony. When Grandpa set the boy on her back, she didn’t want anything to do with him either.
“Here now, Bobby,” Old Grandpa said. “Let’s see you ride the nice pony I got you.”
Precious looked back at Bobby. Another bratty kid, she was probably thinking. She yanked the lead rope out of Grandpa’s hands, dashed down the driveway, and gave a few good crow hops just to let the boy know who was boss.
Bobby tried to hang on with both hands gripping her mane. His whole body snapped up and down like someone shaking a throw rug. His shrieks echoed all over the neighborhood. By the time Precious got to the street, Bobby was leaning hard to the left. Every freckle stood out like blobs of mud, and his rusty hair hung in his eyes.
A neighbor across the street who’d been working on his fence saw what was happening. He hurried toward them, caught the lead rope, and pulled Precious to a stop. “Whoa,” he said. “Whoa, now little pony.” He moved close and began to stroke her neck. She relaxed a little. She’d done her job.
The boy was sobbing. He slid off, and without saying anything, rubbed his face on his sleeve, stumbled back across the yard into the cottage, and slammed the door.
Old Grandpa came striding over to claim the pony. “Thanks a lot, Artie,” he said as he reached for the lead rope. “Looks like the pony ain’t gonna work out for him.” He spat at the ground and began to yank Precious back toward the chicken house.
“Well, Gramps,” Artie called, “some people just aren’t meant for horses. Maybe your grandson’d rather have a dirt bike.”
But Old Grandpa couldn’t hear. He was mumbling to himself, “Spoiled pony. I’m gonna teach you a lesson.” He pulled Precious’s nose down to her chest and leaped on her back. He was way too big to ride her, and his feet almost touched the ground. She spread her legs to keep her balance. Old Grandpa gave her a mighty kick in the ribs with his steel-toed boots. “Giddyup, little brat,” he ordered.
She whirled in pain and terror. As she spun, he lost his balance and slipped off. His back thudded onto the packed dirt.
As soon as she was free, Precious wheeled one more time and headed straight toward the safety and quiet inside the chicken house. She must’ve figured that cobwebs and a rusty cultivator were better than having your head yanked around hard and being kicked in the ribs.
Old Grandpa got up, brushed himself off, and said, “Stinkin,’ rotten little junk horse!” He grabbed her halter. “You’re only good for making into dog food!” He stalked to the chicken house, yanked her inside, and thrust the wire gate shut. He made sure the chain loop dropped well over the post so Precious couldn’t wiggle it free with her nose. Once before he’d had to chase her down in the neighborhood after she got loose.
Old Grandpa placed an ad in the Sun. “For Sale. Welsh pony. Cheap.” He later told Artie, “I don’t think anybody’s ever rode that pony.” Then grinning slyly, he added, “But the next suckers that buy her can figure it out for themselves.”
Good thing we Thompson’s didn’t know any better.
Good thing I didn’t know that having my own pony wouldn’t be like the fantasies I’d made up—where a pony would only want to please--no matter what shame I was hiding. Especially with a pony like Precious. Who had a mind of her own. And lots of bad habits.

Twelve-year-old Annie Thompson used to be friendly and cheerful. She loved her home in Southern California, and she loved school. Now Annie has a secret--one that makes her feel shamed and all alone. When she was nine, an older boy named Lonny molested her more than once, threatening to kill her and her parents if she told.

Now in seventh grade, Annie is withdrawn, suspicious, and depressed. Her parents don’t understand where the girl they once knew has gone, and she can’t tell them. It was her fault, she tells herself. Kids at school sense she’s in pain, and they bully her.

And then, Precious, a six-year-old brown-and-white Welsh pony with a white star on her forehead, appears in Annie’s life. The pony, too, despite the neglect it has received, is a survivor. Together, Annie and Precious embark on a journey that takes them both to a better place.

Doris Anderson has taught thousands of students--many haunted by secrets just like Annie’s--during her long teaching career. When her own children were young, she learned how important horses can be for young people. Anderson has published plays to help teenagers with life issues. She lives in Southern California.