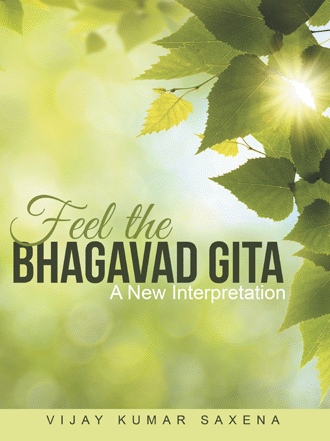 The Bhagavad Gita is an ancient Sanskrit scripture with universal appeal that has been read for centuries, but its full meaning is little understood by Western culture.

Even those with an encyclopedic knowledge of the Bible find it difficult to apply the Gita’s practical lessons to daily living.

Vijay Kumar Saxena unveils the mysteries of the text, including what it says about human nature and the “supreme secret” behind everything animate and inanimate in the universe.

Learn what the Gita says about questions such as:

Why do negative emotions often dominate our nature?

Why do we behave as we behave?

How can we convert our existential living into living with substance, meaning, and purpose?

What is the universal truth of all religions?

The author also explores whether there is a way to live life as naturally as a boat floats on a calm sea--cruising ahead and enjoying time with friends--with ample time to be who we want to be.

Discover the powerful truths hidden in an ancient, sacred text and appreciate what it means to be human when you Feel the Bhagavad Gita.

Vijay Kumar Saxena is a postgraduate in commerce and a fellow of the Institute of Cost and Works Accountants of India. He retired from Bharat Heavy Electricals as Deputy General Manager. He has written several books on cost accounting, financial accounting, management accounting, cost audits, and management audits.