An Allegorical Tale of Loss 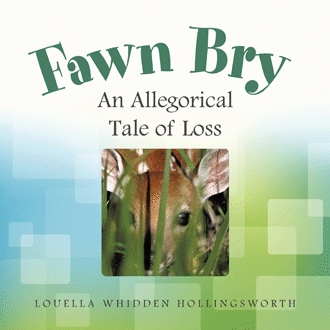 Once upon a time, there was a young deer with large beautiful eyes with long beautiful lashes which accented his shy, timid nature. His name was Fawn Bry. He had strong shoulders which helped him jump very high. He had long delicate legs which helped him run very fast. He was different than the other deer in his herd. His ears were larger and stuck up higher. His hearing was so sensitive that he heard sounds the other deer did not notice. He could hear the first sound of a baby bird or duckling pecking at its shell, eager to begin life, eager to fly.

There were older male deer in the herd, but they had a tendency to stay off from the females and graze alone. They had large racks with long antlers extending in all directions with sharp points on the tips of each antler. These antlers were frightening to Fawn Fry. Sometimes, when the female and male herd all grazed in the same area, Fawn Bry, without looking around, ended up grazing along side of the older stags. They nudged him with their antlers to make him run back to the safety of the female herd. The does were much gentler and more playful, especially the youngest member called Doe Wynn.

Doe Wynn was his favorite to play with. Sometimes she and Fawn Bry would run, play and jump for hours. Fawn Bry’s eyes sparkled with delight during these play times. Whey they played, his long ears flopped back and forth, up and down as though dancing. He was positive that he and Doe Wynn could run as fast as the wind and jump as high as the sky forever.

…The birds were singing their songs in the trees. Butterflies were landing on Fawn Bry’s nose making him giggle when they moved their wings against his tender nose skin. Suddenly, he lifted his young head high into the air. He pulled his ears back with alarm and stood perfectly erect. His white kite tail popped straight up and remained up, meaning danger. His little heart beat rapidly inside his chest, so fast that he could hardly breathe. He cried out, “Run Doe Mother, run!”

Fawn Bry is a shy young deer who is different from all the others in his herd. Gifted with the ability to hear even the tiniest of sounds, Bry is always the first to warn the other deer of danger. Together with his best friend, Doe Wynn, Bry runs, jumps, and plays for hours in the beautiful meadows.

One day when Bry and Doe Mother are grazing away from the rest of the herd, he hears a sound that causes his ears and tail to perk up. After Bry and his mother hide in the brush away from the danger he senses, they finally emerge to discover Doe Wynn is gone forever. Now Bry must find comfort in his memories as he grows older and happiness as life is created once again.

Fawn Bry shares the poignant tale of a special young deer’s journey through loss as he learns about the circle of life and how to honor his friend’s memory.

Louella Whidden Hollingsworth grew up near Arcadia, Florida, where she explored the woods and used her imagination. Her first book is based on her grandson’s touching reaction to the tragic loss of Louella’s youngest daughter.