Second in the Trilogy, Ordeal by Fire 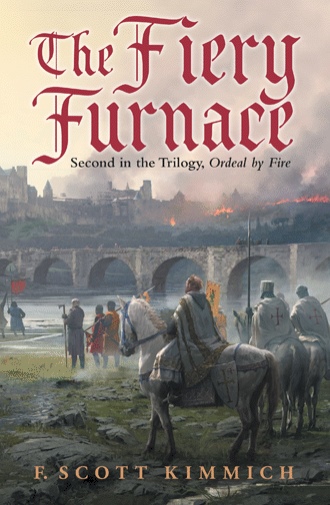 Wringing out the laundry with the help of Odette, the wife of one of the mercenaries, Miranda turned her thoughts to Robin, Rainier’s English friend. When he and Rainier had appeared on the pueg, she was smitten with Robin. Later, she was crushed to find that the man of her dreams, Odon, was not only another cousin but was in deep mourning and virtually unapproachable. Rainer had become her fast friend, but he didn’t make her heart beat faster. On the other hand, Robin….
The handsome Englishman was exceedingly pleasant but somewhat aloof. When they engaged in small talk, his eyes did not devour her in the same way those of most single men did. He certainly didn’t openly court her affection, which she found discouraging.
Her co-workers, especially the married women, gossiped nonstop in salacious detail about the few single men in the garrison. Robin was one of their favorite subjects, and while they envied Miranda for the opportunities she had to meet with him, they teased her about her intimate contact with him, and shrilly scoffed when she assured them that the intimacy was far too chaste for her liking. When she finally persuaded them that nothing had ever occurred between her and Robin, they showered her with advice on how to catch a man, up to and including adding herbal aphrodisiacs to his drink.
While most of the counsel seemed fatuous, one maxim became quite clear: if women waited for men to make the first move, they might go to their graves unwedded and unbedded. Men frequently needed encouragement, invitation, or even seduction to awake serious interest in a given woman.
Robin’s reconnaissance activities, day and night, left little time for her to find him alone. Nevertheless she pined for his attention and when she was with Rainier, she had to fight to concentrate on what he was saying because her intense infatuation for the Englishman was occupying so much of her mind.
One evening just after sunset, she had climbed onto the ramparts to gaze at the crescent moon and found Robin in deep conversation with Sergeant Brensa. She went over to them, knowing full well that she was intruding, but her desire to be with Robin overwhelmed her modesty and reserve.
“Excuse me, gentlemen, but ‘tis an exceptionally fine night. I hope you won’t mind my company.”
The two men turned and put their hands to their caps. “’Tis indeed, my gracious young lady,” the sergeant said. “Please forgive me, but I’ve got a report to make to Mirepeis; else I’d much prefer to stay and converse. I wish you a very good evening,” and turning away, he added, “See you later, Robin.”
Robin waved and turned to Miranda. “Where’s Rainier? Methought you two were inseparable.”
She stood close to him and looked up into his eyes. “I’ve no idea where he is.  I do enjoy his company a great deal; ‘tis a great boon to have such a nice cousin.”
“I should think so,” Robin replied.” I have no cousins, and just one sister back in England.”
“Tell me about her.”
“To say truth, I haven’t seen her for five years. She’s married and has a baby. Perhaps now she has a couple more. I’ve no way of knowing.”
“Is she pretty?”
“I always thought so,” he shrugged.
.   “Is she tall like you? Lean? Plump?”
“Before she had the baby she was just about your size. She became a bit stout after the baby, but ‘twas a long time ago.”
“I’d give anything to be as pretty as your sister.”
“But, Miranda, you are pretty,” Robin protested. “Anyone can see you’re a knockout.”
“Then why haven’t you told me before? What’re you waiting for?” Miranda pretended to pout.
“I…ah…methought you knew,” Robin said.
“I want to hear it from your lips,” she said, and placing her hands on his shoulders, looked longingly into his eyes.
Robin stared at her in astonishment, and then a smile of comprehension came over his face.
“You want me to make love to you, don’t you?” he said gazing down at her fondly.
“Yes, oh, yes,” she murmured, closing her eyes and tilting her face up for a kiss.
Robin gave her a demure peck on the lips. “Miranda, you’re a lovely girl, but I’m not the man for you. I can love you like a sister, I can kiss you like a sister, but I cannot make love to you. I cannot give you the kisses you crave. Can you forgive me?”
Miranda’s eyes brimmed with tears and overflowed onto her cheeks. “You love another? Do I know her?”
Robin hesitated, and pulled her close to him. She buried her head in his shoulder.
“No, there’s no other woman, I promise you,” he said, caressing her head.
“Then why…?”
“I really don’t know. ‘Tis just the way it is. I’m terribly rueful if I gave you the wrong impression.”.
“No, no,” Miranda muttered, stepping away and rubbing her eyes with the back of her hand. “I presumed too much. The blame is mine.”
“My dear girl, nothing you’ve done deserves any blame.”
He put his hands on her shoulders. “We all experience times when our affections are misplaced, and if we are lucky there is no harm done. Methinks we two have been lucky and at the end of the day we can remain friends. You’re still my friend, aren’t you?”
Miranda nodded.
“Well, I assure you that I’m your friend for sure and will be ‘til my dying day,” Robin said, and gave her another peck on the cheek.
Whirling away to conceal a new onset of tears, she ran down the stone steps without looking back. Robin stared after her, and cursed under his breath. She was the last person he ever wanted to hurt. He looked up at the moon lighting the snow-covered peaks across the way, and longed to howl in anguish. Why did life have to be so goddamned complicated?

It is 1234, and heretic Olivier de Mazan possesses a secret that makes him a prime target of the Inquisition’s secular thugs. At the same time, Count Raimond of Toulouse and Queen Blanche of France are using the boudoir to pursue the policies of their respective dynasties.

Olivier’s grandsons – Odon and Rainier – come of age fighting the French usurpers at the side of Robin Hood’s son, a veteran mercenary. Along the way, the lovely performer Huguetta steals Odon’s heart, and Rainier loses his own to Miranda, who embodies Olivier’s secret.

In contrast, Count Raimond risks a rupture with Blanche by attempting to save his dynasty via strategic marriages and consequently delays rescuing his subjects trapped in the mountain fastness of Montségur, “Mount Secure.”

In this continuing saga, a Cathar family embarks on an epic struggle as they discover their true heritage, embrace their faith, and learn what it means to make the ultimate sacrifice.