As Told by the Len Piper Marionettes 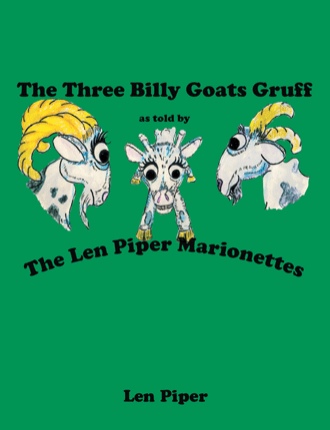 Whether he’s designing Snoopy’s Garden in Japan, children’s museums or other interactive attractions, Len Piper loves to get imaginations churning.

He’s been dubbed “Hawaii’s Santa Claus” by the Honolulu Advertiser in recognition of his twenty-five years as the jolly elf at the fiftieth state’s largest shopping center. He’s also created extravagant sets for musical productions and store interiors for some of Hawaii’s top brands.

But his first love has always been puppetry, and he shares the joy it can bring with The Three Billy Goats Gruff, which he performed throughout the country for hundreds of thousands of children.

Through the adventures of Big Gruff, Middle Gruff, and Little Gruff--as well as the wicked troll and his wife--he outlines the basics of creating a puppet play and plays in general.

Filled with photos from his original production, an easy-to-read script that’s color coded for each character, and plenty of adventures, the story will encourage children and adults alike to look at the world in new, creative ways.

Len Piper is a master puppeteer who put himself through college by performing puppet shows. He operated a national puppet theater that toured the United States. He also directed the University of Wisconsin puppet theater for seven years. He has four sons and lives in Hawaii with his wife, Jackie.