This Is Not Where It Ends 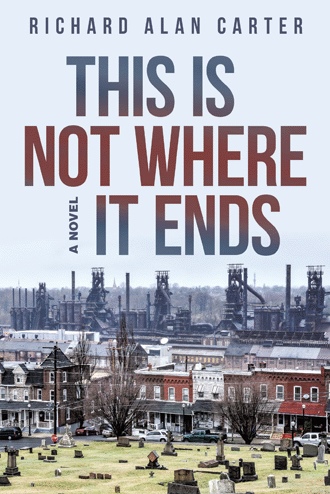 She closed the door behind her, pulled the drapes shut, took off her shoes, stood on a chair, popped out the battery from the smoke detector, sat down on the edge of the bed and lit a cigarette. The drone from the cars outside on the highway mixed with the fan tumbling around in the room’s air conditioning unit: a brown-tinged white noise washing over her. She closed her eyes and exhaled. The air in the motel was heavy, cool and musty. She sat there as if underwater and allowed her mind to clear, her thoughts floating away, dissipating.

She kept her eyes closed and smoked, letting the ash waft across her legs and onto the carpeting. How long had it been? How long had it been since the last time she’d she stopped running around worrying about every little thing? Stopped worrying what everyone else thought and if they were ok?

Footsteps and muffled speech on the other side of the door brought her back, her eyes blinking open just in time to register someone pass in front of the window. She got up and walked into the bathroom, dropping the cigarette butt into the toilet before dropping herself onto the seat. Leaning forward with her head nearly between her knees, she peed hard. Out, that’s what she wanted. She wanted it out. But that wasn’t going to happen was it?

“Now what goddamnit!” she yelled, standing up in one quick fluid motion. Turning, she reached out and flushed. ‘Now what?’ she mouthed silently as she watched the butt circle the bowl and drop out of sight.

She walked back into the bedroom and sought out the clock. Three quarters of an hour past noon. It’d be another hour before anyone at her job began to wonder where she was. She had time. She had a decision to make. She could use a drink. But this wasn’t the kind of place with a mini-bar tucked into the closet. This was the kind of place where the occupants brought their own, and looking around the room, her guess was that there’d been lots of them with lots of it. Climbing onto the bed, she pushed aside the pillow and lay flat on her back.

The Silly Girl Who Always Got What She Wanted.

Oh man, how long ago had it been since that fairy tale got wiped?

All of the Little Princess’s dream big if not particularly original dreams. And hey, if you grew up in some redneck shithole you wouldn’t mock it. It’s a fine line that separates a girl from the leering, tattooed masses of inhumanity and the cold manufactured sheen of vinyl double-paned insularity. You may have played with your Barbie in a trailer, but your Barbie didn’t live in one. How many lithe young millworkers’ daughters jumped on the first bankroll to come their way and years later end up catching a glimpse of themselves wearing a tablecloth, bent over spanking some screaming kid in the aisle of Shopper’s Food Warehouse?

It’s funny now to think about how much she thought she hated that place. In retrospect it was nothing more than boredom and a sense of adventure that put her in the arms of a boy who would provide a ticket to somewhere else – wherever the hell that was. Growing up she lived there and that was that. It was only later when her father was ill, dying on a bed they’d set up in the front room of the house he’d spent a lifetime sweating blood for and raising a family in, that she came to see it for what it was.

She saw the rotted wood flooring in all corners of the kitchen, the lopsided screen doors and the sagging drywall ceilings. All those streets with no sidewalks, covered in soot-streaked snow under a grey sky, lined with one stagnant pile of lives after another. She was out front smoking. There was a dog across the street chained to a post, in the way only someone without pretense could have done, straining towards a fixed point in the distance. She watched as it circled and pulled, backed up and circled again. The struggle within manifested in a futility of effort transfixed. And for a moment she wanted to release the hero, see him break free and run - all the way back to the land of plenty and bite the first one of her pretentious neighbors who tottered out onto their sculpted lawn.

And then her daddy died, and a door closed on something she never saw coming: her past came into focus without the distance of hindsight. For the first time in her life she was at home. In a place she hadn’t lived in for nearly thirty years, her heart finally exhaled.

In the house, in the ambulance, in the hospital.

In the casket, in the church, in the ground.

In the end, it all seemed like a beginning that she was now going to turn her back on and walk away from.

With everyone looking on she cried. She cried for her dead father who’d spent his final years alone in the house; his days culminating, quietly and politely turning down one anonymous phone-call solicitation after another. She cried because her time was speeding up and she was only now making the effort, putting in the emotional capital, to follow up on the life she’d long ago surrendered to the easy group-think construction of quintessential middle-class nonsense.

The room was darkening now and the traffic outside sounded fuller. Standing, she smoothed down her blouse with both hands while making eye contact with herself in the mirror across the room. She was cool and dry as she slowly made her way closer to the reflection, pulling the clothing over and off with one hand, stopping to peer directly into her own face. That morning, in the shower, she’d been enveloped by tears. It was raining tears all around her and she had been…what? Scared? Confused? Something. Her compass had spun under the fixture. She pressed her hand flat against her belly and slid it up and under her breast, letting her fingers press ever so lightly, resting on the lump. Her nose tingled and she knew.

She watched the single tear develop and she knew.

Clara Kozlowski is stuck, confused, and afraid that somehow she has wasted her life. After she overcomes her fears that she is undeserving of another chance, Clara declares emotional bankruptcy, leaves the middle-class nonsense behind, and sets out to follow up on the life she surrendered long ago.

Nearly two days later, Clara arrives at her sister’s house, grappling with both heartfelt and reckless decisions that lead her to the railroad tracks in the middle of the night. Officer Nelson Little has already had quite a week when he watches a lone woman from afar as she stands in the street at two in the morning watching a train pass. When their paths finally cross a short time later, Clara is contemplating whether it is too late to build a future that may not even exist for her while Officer Little is attempting to come to grips with his unfulfilled dreams. Finally when Clara decides all life is worth the fight, she heads toward the sea with her sister and Officer Little where everything becomes clear under an ever-changing sky.

In this poignant tale, a woman races against time as she catapults herself into an uncertain future and seeks a second chance at the life within her life.

Richard Alan Carter was born in Falls Church, Virginia. He holds a degree in Technical Writing from Northern Virginia Community College and works in newspaper publishing. This is his debut novel.