Reflections on How Faith Helps Us Control Our Anxiety 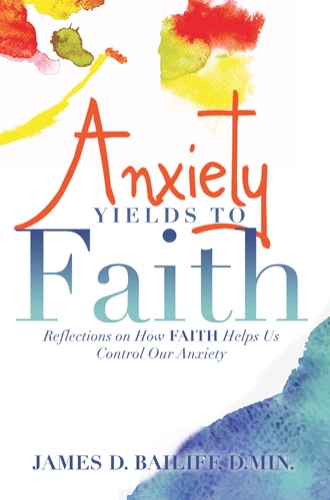 Most likely we have all experienced both very cold and hot temperatures.
For me, the coldest were encountered during those years of growing up in the mountains of North Carolina. The winter temperatures were often well below freezing resulting in a thick layer of ice growing over Curtis Creek that flowed by our house.
My primary morning chore was milking our family cow. We called her Patsy, a gentle Guernsey whose body bore the beautiful markings of light tan spattered across an underlying sea of white. On winter mornings I followed a ritual of putting on a heavy flannel shirt, a pair of thick trousers, heavy socks and high top shoes; followed by slipping into my heavy coat and rubber boots.
Off I would go, shuffling for about 200 yards through the snow to Patsy's night-time home in the barn. Entering her stall, I would halter and lead her into the breezeway, her steaming breath rising like the exhaust from the pipes of a eighteen wheeler. There I would position my milking stool, remove my gloves, place my hands on her teats, and proceed to massage her milk into my bucket as she stood in position for a ritual she had long since internalized.
During the milking process both Patsy and I were exposed to the extreme chill of the winter wind that rushed through the breezeway. It was then that I experienced the coldest temperatures I can remember.
The return trip through the snow back to our house was often testy but my anticipation of home and hearth sped me toward its warmth. Arriving, I shed the heavy coat and boots, moved toward the radiating heat of our generous coal-fed stove, and began the process of “thawing out.” Even though I felt frozen my body temperature was remarkably stable with a temperature around 98.5 degrees.
Then there is the issue of heat. When I think of heat, my memory rushes back a few years to a time when my wife and I, along with several friends, were visiting the pyramids at Giza in Egypt. Walking across the burning sand from one to the other we experienced a temperature hovering around 110 degrees. As I sipped my bottled water and struggled to put one foot in front of the other, I remember yearning for the summertime high country of the Rocky or Appalachian mountains.
At the main pyramids, I remember entering and descending into the relative coolness of ancient chambers insulated by thick layers of stone and tons of desert sand. There we comfortably enjoyed the ancient artistic imagery and the excellent commentary of our tour guide.
As we emerged from those chambers, the searing desert heat again smacked our faces and locked our bodies in uncomfortable embrace. But we trudged on tolerating its unpleasantness in order to experience not only Giza but the legendary Valley of the Kings which, together with the pyramids, constitutes one of the most fascinating cradles of history in the world.
But Egypt's hot sun did not suppress the ability of our bodies to keep our temperatures around 98.5 degrees. The inspiration of such physical stability was, for me, almost as inspiring as the day's scenes upon which we reflected in the comfort of our air conditioned hotel room.

Anxiety Yields to Faith: Reflections on How Faith Helps Us Control Our Anxiety does not shy away from unmasking the often hidden burdens that people who live with anxiety feel in their daily lives. Instead, James. D. Bailiff, drawing upon a career’s experience as a pastor and the educational insights flowing from advanced theological degrees from Emory University and Vanderbilt University, explores the sense of balance and imbalance that flows through human life. He presents an honest appraisal of the role of anxiety in human life and sketches out the therapeutic value of faith in dealing with anxiety.

Anxiety Yields to Faith also digs into the scriptural witness to the ministry of Jesus and reviews how therapeutic faith connects people to God. Finally, people who recognize their anxiety and who rest upon the foundation of therapeutic faith can discover how such faith connects them to the world as they engage in therapeutic work. They can find the strength to do justice, make peace, practice conversation, and share the Good News of Jesus with others.

If you know the gnawing and roiling feelings of anxiety in your own life, or if you know and care about someone who faces such feelings, then Anxiety Yields to Faith: Reflections on How Faith Helps Us Control Our Anxiety can help you understand the workings of anxiety, appreciate the gifts faith pours out in the face of anxiety, and celebrate the opportunities to live by this therapeutic faith in service and witness.

James D. Bailiff earned a doctor of ministry degree at Emory University, a master of theology degree from Vanderbilt University, and bachelor degrees from Johnson University and East Tennessee State University. A retired pastor, he and Beverly, his wife, live in Sarasota, Florida, and participate in their congregation’s music ministry.