Excessive Accumulation of Money and Power Through the Federal Elections Market 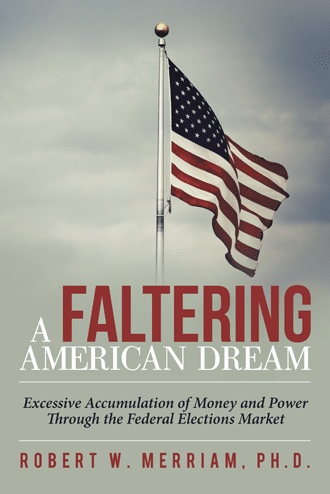 A Faltering American Dream is a jolting analysis of the current United States’ decline in government capabilities and solvency compared to other advanced nations of the world. It documents infrastructure deterioration, high national debt and poverty, scarcity of good jobs, and decreases in affordable higher education. The origin of these problems is in Washington where the harsh, uncompromising clash of political ideologies has resulted in a functionally disabled Congress.

In this book, the author collects a wide range of information to arrive at a unique perspective on the policy differences so bitterly contended in Congress: the size, functions, and business regulations of the federal government, and its tax support of traditional services. The author directly compares economic and employment results of contending party policies, since World War II when each party held the presidency. He demonstrates that government spending per person since the 1980’s is increasing faster than inflation, population, and GDP growth. These increases have occurred through administrations of both parties and show little or no effect of ideological differences. He seeks answers for why is this happening.

In this lucid book, the author clarifies how and why such changes are happening to America’s economy and former world prominence. At the root of most of these problems, he identifies a fatal flaw in our governance structure, unanticipated by the framers of the constitution. This book concludes with an urgent call for a practical correction of this defect and a plea for the campaign rhetoric of the 2016 political candidates to express clearly the reasons why they advocate their policy positions on important economic issues.