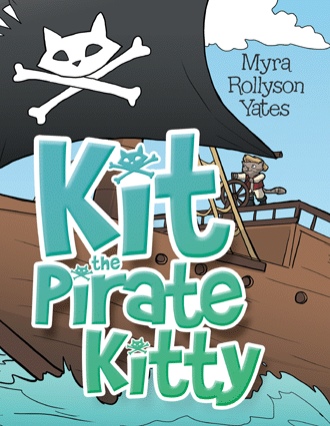 Captain Rock was known far and wide as the most honorable Captain sailing the Caribbean and Atlantic Seas. There was only one strict rule the he enforced, NO PETS ALLOWED.

This broke the heart of the youngest daughter of the family since she had, just a few month earlier, become attached to a spunky, tabby kitten that she named Kit. The young traveler even brought Kit to the dock in hopes that Captain Rock, once seeing what a special kitten Kit was, would relent and allow Kit to travel along with her beloved girl.

No such luck for the child and Kit. Captain Rock stuck to his rule and Kit was left behind on the dock to fend for herself.

Kit was sad. She meowed for days and days and stayed by the dock in hope she would see The Eldora on the horizon coming back for her. Once she realized she would never see her special human again, her sadness turned to anger, as happens to many when they feel all hope is lost.

Kit began to associate with other kitties left behind on the dock. With the help of these other lonely kitties, she plotted her revenge on Captain Rock and the crew of The Eldora, the Captain and crew who had taken away the ones she loved most. Kit rallied the other down and out kitties and decided they would become PIRATES! They would get their own ship and sail after Captain Rock! Once Kit had Captain Rock and the crew in her paws, she would demand that he take her to her sweet little girl.

What Kit did not know about Captain Rock was that he had a very good reason for not allowing pets on his ship.

Kit is a loveable tabby kitten who is left behind when her family sets sail from Barbados to Charleston, South Carolina, in 1699. She harbors bad feelings for the captain of The Eldora. After all, he took away her beloved family, and he has a strict no-pets-allowed policy on the ship.

The only way Kit knows how to find her family again is to rally the kitties left behind and sail the seas looking for The Eldora and Captain Rock. Once she locates the ship and the captain, Kit learns a valuable lesson. Sometimes circumstances and people’s actions are not always what they seem, and we shouldn’t judge them before discovering the truth.