Once a Man—Twice a Boy 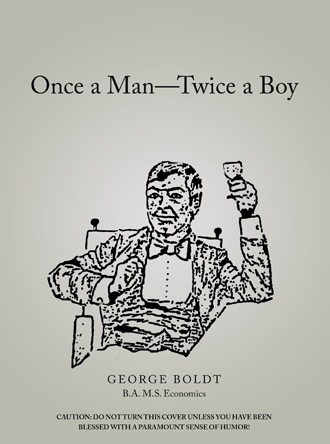 I was only twelve years old when my Great Uncle Cleveland Stage gave me a full size, very livable houseboat. And, since that time I’ve never been able to re-create, anything even close to that amount of fun! So ever since those days of “the houseboat grenadiers;” I haven’t dreamed of anything else except being able to “re-live that wonderful dream” Now that I finally have the opportunity to compile enough cash and it’s almost impossible to return to my former way of life; I’m going to go right out and buy the biggest God Damn house-boat that I can find!

George Boldt was born in Clayton, New York, a village with approximately eighteen hundred citizens, nearly as many dogs, and two seasons—August and winter. Throughout his childhood, George learned to rely on advice from his grandmother and her brother to help him navigate through the challenges of growing up. But everything changed the day his great uncle unexpectedly gave him the title to his beloved houseboat and asked him to transform it into a clubhouse for local boys.

In a life story that he proclaims is sixty-seven percent true, George leads others down an amusing path through his memories as he plays on his inherited houseboat, learns about girls, and meets a lively band of characters that include Captain Prunes Percy, Woodchuck Monoe, Flashlight Fulton, and Cowboy Unmanly. As he details his move into adolescence and beyond, George provides a glimpse into a life full of adventure and his determined pursuit to keep his uncle’s dream alive.

In this fictionalized memoir, one man chronicles his unique, often humorous coming-of-age journey through life as he grows up, attempts to find his place in the world, and contemplates whether he can really ever go back in time to his enchanted boyhood!

George Boldt earned a Bachelor of Arts and a Master of Science in Economics degrees. He currently resides in Lighthouse Point, Florida. This is his first book.

AMONG THE FONDER HIGH POINTS OF MY MEMORY: LIES A BROTHEL WHICH CATERS TO WOMEN AND IS FORBIDDEN TO MANKIND.